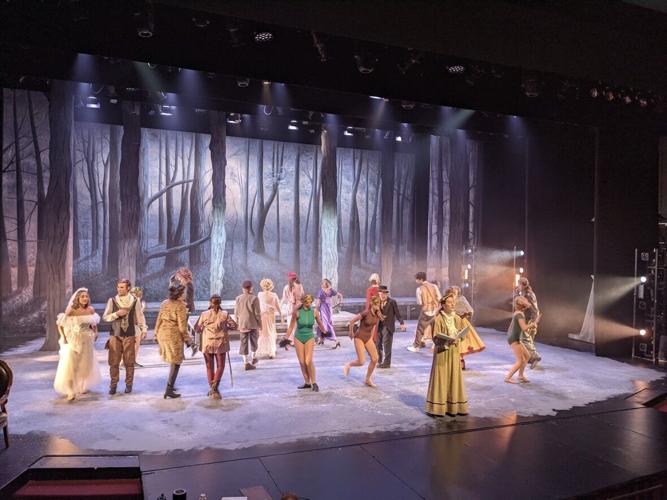 Aspen High School (and middle school) students perform a group number during a dress rehearsal for “Into The Woods.” The students have been rehearsing for nearly four months to bring this elaborate, musically sophisticated production to the stage this weekend. Performances will be held at the Aspen District Theatre from Thursday through Sunday. 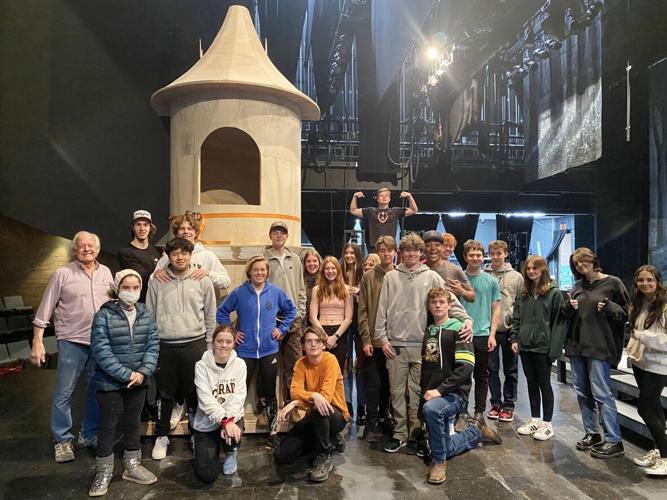 Logan Carter's Tech Theatre class, which helped put the tower together for "Into The Woods,” poses for a group photo backstage at the Aspen District Theatre.

Aspen High School (and middle school) students perform a group number during a dress rehearsal for “Into The Woods.” The students have been rehearsing for nearly four months to bring this elaborate, musically sophisticated production to the stage this weekend. Performances will be held at the Aspen District Theatre from Thursday through Sunday.

Logan Carter's Tech Theatre class, which helped put the tower together for "Into The Woods,” poses for a group photo backstage at the Aspen District Theatre.

With a large cast and professional costuming and set design, the AHS Theater department has put together a major production of Stephen Sondheim’s “Into The Woods.”

Aspen High School’s annual spring musical starts today and runs through Sunday. Showtimes at the Aspen District Theatre are set for 6 p.m. today, Friday and Saturday. Matinees are scheduled for 2 p.m. on Saturday and Sunday.

This year’s spring production has been a long time coming, said Director Logan Carter, who has taught theater to middle and high school students in the Aspen School District for more than nine years.

Carter said the spring musical has always been a big deal for AHS performing arts students and the school’s theater program. She explained how in 2020, the show was canceled on opening night, and last year’s production was restricted to a limited cast, on-stage distancing guidelines and performing in masks.

“This year’s experience has been the return to theater like we knew it — the kids have been starving for that, and it really shows,” Carter said. “This show will shock the community when they see the talent and dedication of these students.”

With an assembled cast and crew of 35 Aspen high school and middle school students, “Into The Woods” not only marks a return to theatrical normalcy, but also a monumental moment for the handful of AHS ­seniors who have grown through the theater program over the past four years.

“The students have been begging to do ‘Into The Woods’ for years — since this current group of seniors were freshmen,” Carter said. “We thought about it, but it’s a very big show with really complicated music, and we knew it was one that required strong singers and a lot of dedication overall.”

Considered one of Sondheim’s most popular works and based on the book by James Lapine, “Into The Woods” is a lyrically rich retelling of classic Brothers Grimm fables. The dark comedy features fairytale figures and archetypes — including Cinderella, Little Red Riding Hood, Jack (and his beanstalk), Rapunzel, the Witch and the Baker and his wife. The narrative follows these characters as they each wish for something and embark on quests to get what they want. Though their wishes come true, it comes at a cost, Carter said.

“‘Into The Woods’ is about being careful of what you wish for and being grateful for what you have,” she said. “It’s one of my favorite shows because of the messages, and it’s a beautifully told story.”

Throughout the show’s trajectory, the characters’ stories intertwine deep in the woods, unfolding with darkness, greed and even death. While Act 2 is appropriate for all ages, Carter noted that Act 2 is meant for ages 10 and up due to some mildly disturbing and dark content. Saturday’s 2 p.m. matinee is a discounted performance of Act 1 only, catered to younger audiences.

Carter describes “Into The Woods” as one of the biggest shows in the realm of musical theater, especially when it comes to musical prowess and sophistication. When this talented group of students first started begging to bring the intricate musical to life, she recalled that the theater department staff agreed to “build the program for a few years,” working with the now upperclassmen throughout their high school careers to advance their skills.

While the department originally announced “Into The Woods” for last year’s spring musical, Carter said they were unable to carry out the demanding, elaborate production under the COVID-19 restrictions that were still in place.

“This year was the year to do it,” she said. “This cast is the cast to do this show — they’re up to the challenge of late-night rehearsals and tackling all of the lines, lyrics and choreography there is to learn.”

She mentioned that she has known and taught many of the current high school seniors ­involved in the production since they were in the seventh grade, emphasizing that they are “a big theater class.”

Because of their commitment and leadership, the seniors have grown and inspired the classes below them, the proud teacher remarked, adding that about eight upperclassmen will go on to pursue musical theater in college and attend some of the top theater programs in the country.

“This senior class is extraordinary,” she said. “This is a bucket-list show for me with a once-in-a-lifetime cast.”

The AHS production of “Into The Woods” takes place Thursday through Sunday at Aspen District Theatre. Tickets are $15 for students and $20 for adults. The Saturday 2 p.m. matinee is discounted at $10 per child and adult.

Tickets for all showtimes are available at simpletix.com.