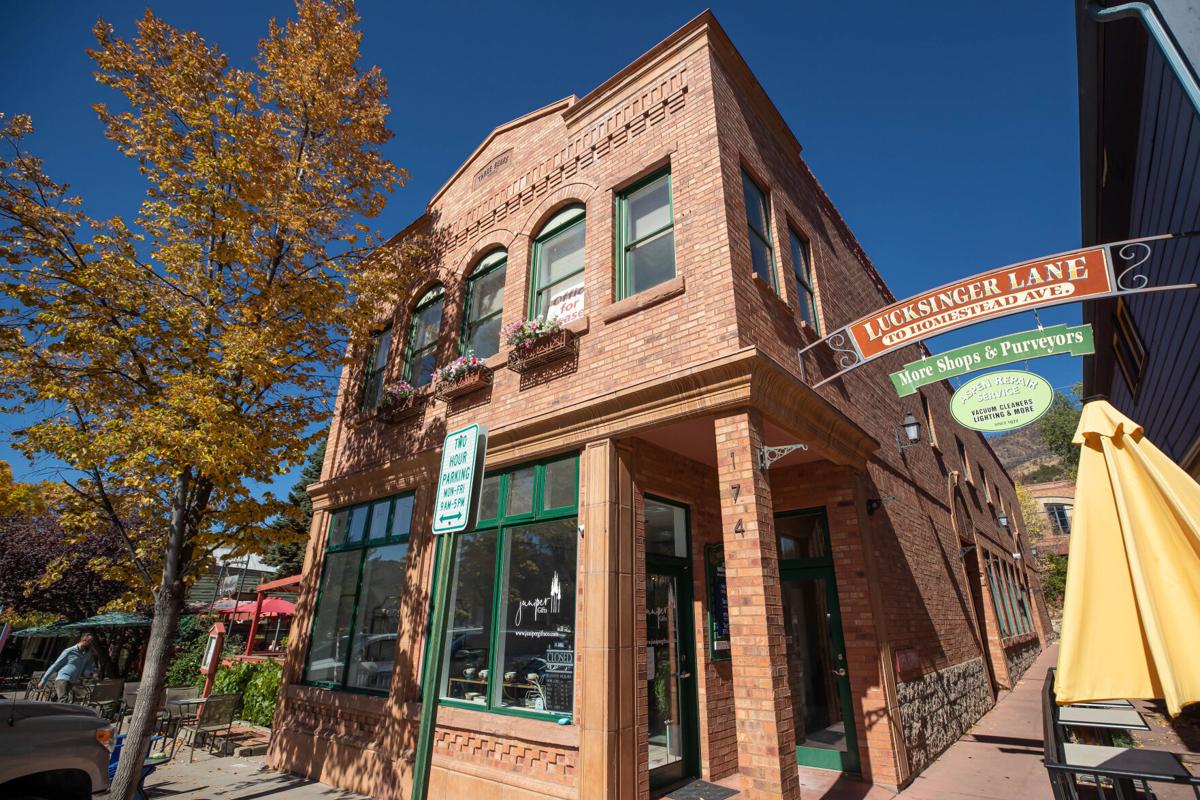 With pics found in Art Base folder

The Art Base nonprofit is under contract to buy the Three Bears Building in Basalt for $1.7 million. Located at 174 Midland Ave., the building previously hosted some Art Base functions on a temporary basis. 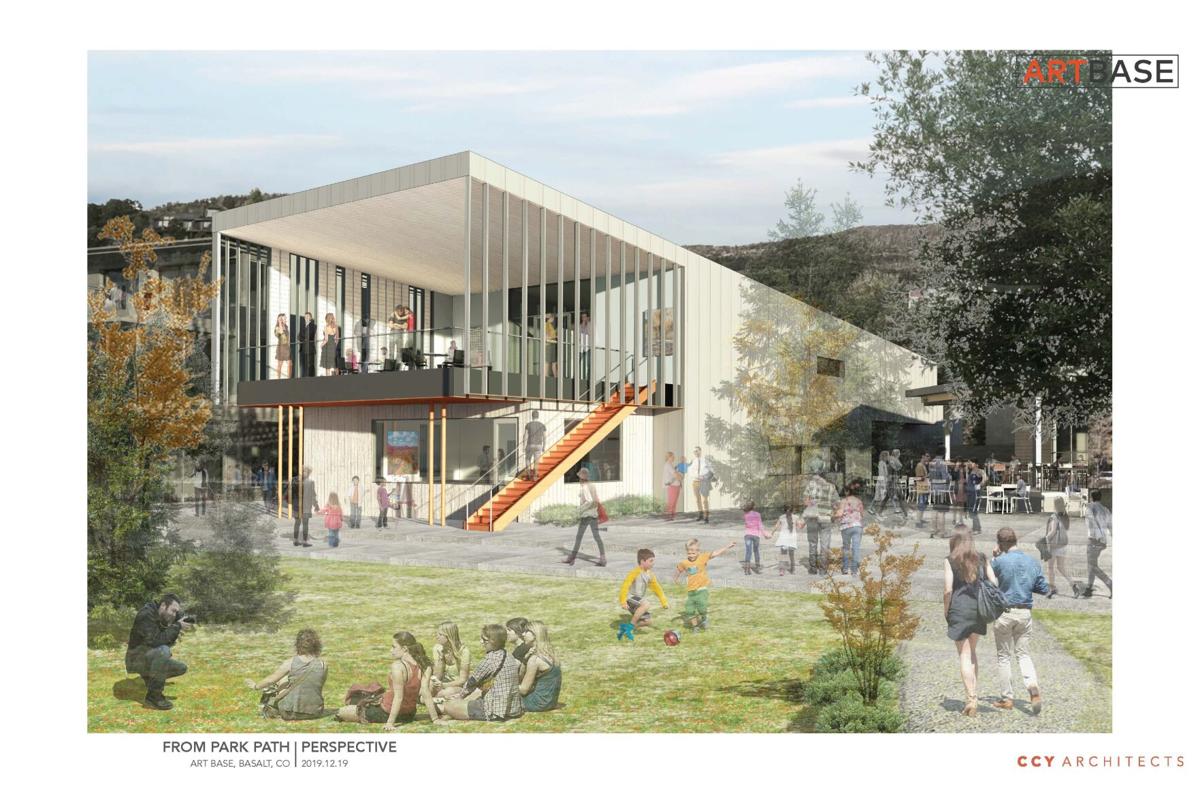 An early rendering of The Art Base’s plan for Basalt River Park. Instead of new construction, the nonprofit Basalt visual arts center now plans to take up residence in a building on Midland Avenue that it is under contract to acquire. 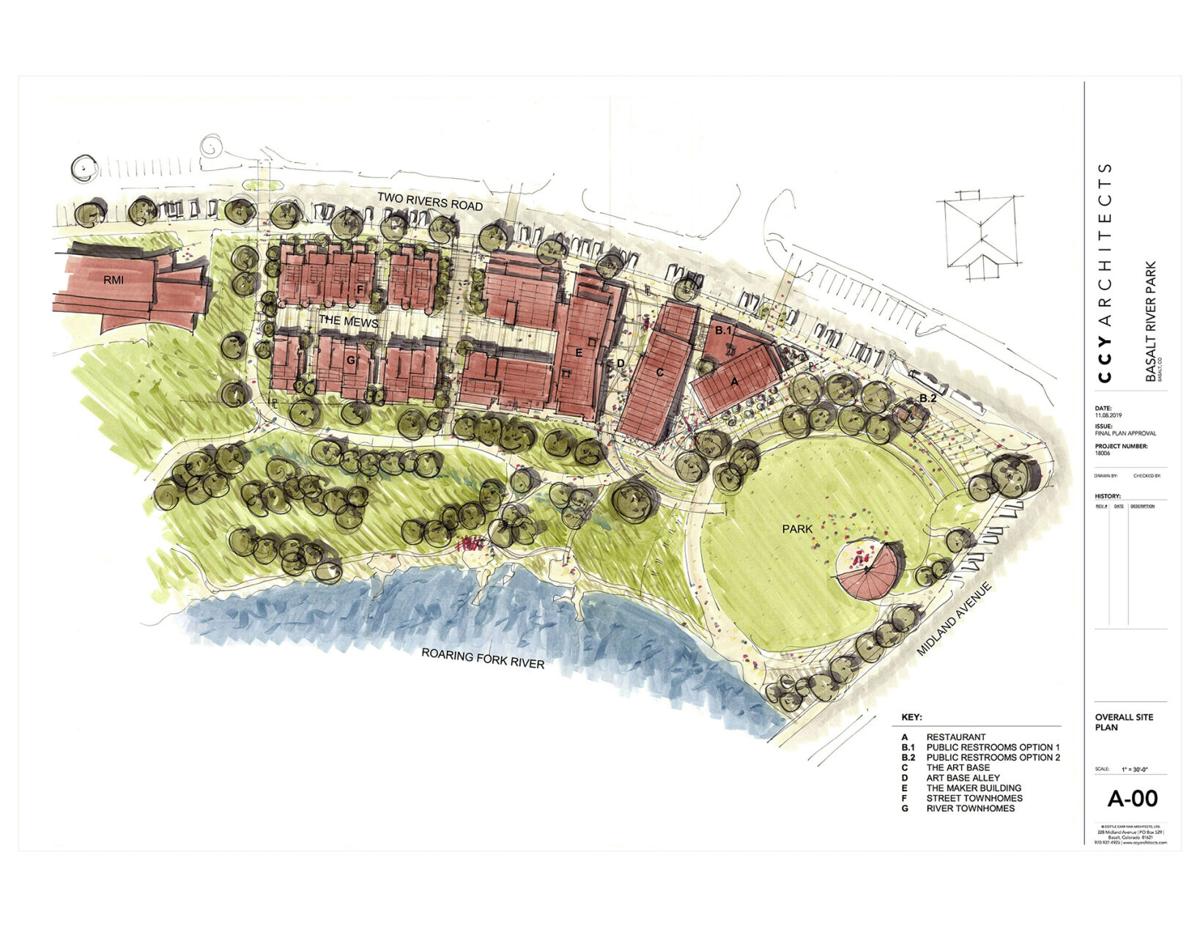 The Basalt River Park parcel has Two Rivers Road, Midland Avenue and the Roaring Fork River as its borders. A component of the development, The Art Base (indicated by letter C), has changed, as that organization says it’s opting for an existing building in downtown, rather than constructing a new structure on this land.

The Art Base, the nonprofit pinnacle of Basalt’s redeveloped Pan and Fork Property, will walk away from that plan in favor of a stand-alone building in the heart of old town, Executive Director Skye Skinner said Monday.

The organization is under contract to buy the Three Bears Building from Norm and Laura Clasen for $1.7 million, and fundraising for the down payment has already been secured, Skinner said.

Until recently, The Art Base intended to construct a new, 6,000-square-foot visual arts center on a parcel in the middle of Basalt’s River Park, a mixed-use development on the former trailer home site that in February received town approval for its two-phased construction plan.

“Space was a driver of the decision, as well as just a more modest fundraising effort — what we consider to be a responsible and sustainable approach to securing the future of the Art Base,” Skinner said.

The Basalt River Park property is bordered by Two Rivers Road, Midland Avenue and the Roaring Fork River, and Skinner said The Art Base had intended to move forward with constructing a new building on that land, as had been contemplated for several years.

Then came the pandemic and with it, time for introspection.

An Art Base board member saw the Three Bears Building at 174 Midland Ave. listed for sale this summer and asked if the directors could take a look at it, Skinner said.

The building was already familiar to The Art Base, which had once relocated there temporarily in a pop-up capacity; its visible street front space provided welcome room for an annex gallery.

Skinner said each floor of the Three Bears Building offers about 2,400 square feet of space that can be used for exhibitions, classrooms, educational opportunities and offices. Its building owners, the Clasens, last week declined to confirm the identity of the prospective purchasers, citing confidentiality in the agreement.

Currently, the Art Base operates in a space on Lion’s Park, contiguous to the town of Basalt’s planning department that it rents from the municipality for $1,000 a month. “The town is very good to us,” Skinner said.

In the roughly 1,400 square feet, classes are limited to six children, due to COVID-19 restrictions.

“For us, we needed more space yesterday,” Skinner said. She added that — at minimum — by developing a building on the Basalt River Park parcel, “We would be looking down the road, optimistically, at two years for the development to happen. We really don’t have two years.”

Mayor Bill Kane said the town will still move ahead to buy the parcel and would likely offer it to another tenant. Town Manager Ryan Mahoney on Monday said the arts parcel price they have agreed to pay the Roaring Fork Community Development Corporation is $149,726.07.

Negotiated by the previous town council, Kane said, “We have no intention of maintaining long-term ownership” of the property.

The Art Base had not formally advised the town of its plans as of midday Monday, Kane said, and he sounded frustrated to be “dealing with rumor and innuendo” about the purchase contract on the Three Bears Building by The Art Base.

Tim Belinski, representing developer Basalt River Park LLC, said Monday he was “surprised” to hear of The Art Base’s new direction and that he “needed to understand what was driving that change.”

“We all want The Art Base to prosper, and if this is helpful to them, we’re supportive of it,” he said.

“It remains a hope they would still find their way to the River Park,” as the nonprofit has long been viewed as the parcel’s “activator and vibrancy creator. It would be great if they would still be a part of what was planned,” Belinski continued.

The town’s elected officials have also long seen The Art Base’s inclusion in the river park project as desirable.

Groundbreaking on the initial phase of the Basalt River Park development — which will span about 50,000 square feet in totality — is anticipated for next spring, a timetable unchanged by the pandemic.

“We’re in full, pre-development planning mode,” Belinski said, adding that one potential barrier, floodplain approval from the Federal Emergency Management Agency, was moving closer to being removed. A final letter of determination from FEMA was issued in September.

The first phase of the developer’s plan will see the construction of eight free-market residences on the site, with the second phase to include a restaurant, more commercial space and two additional residential buildings.

Belinski would not say how much the development group was paying the Roaring Fork Community Development Corporation for the Basalt River Park land.

The prices negotiated by the town of Basalt for its portion of the property, however, are public record.

In addition to buying the site for The Art Base or its successor, Basalt is under contract with the developer to buy the 1.1-acre parcel on the property’s corner for $1,378,146.09, according to Mahoney. That would be for park usage and is funded by a sales tax dedicated for parks, open space and trails.

“I’m anxious to get the corner parcel and get the fence taken down to where people enjoy going down there and using it,” Mayor Kane said.