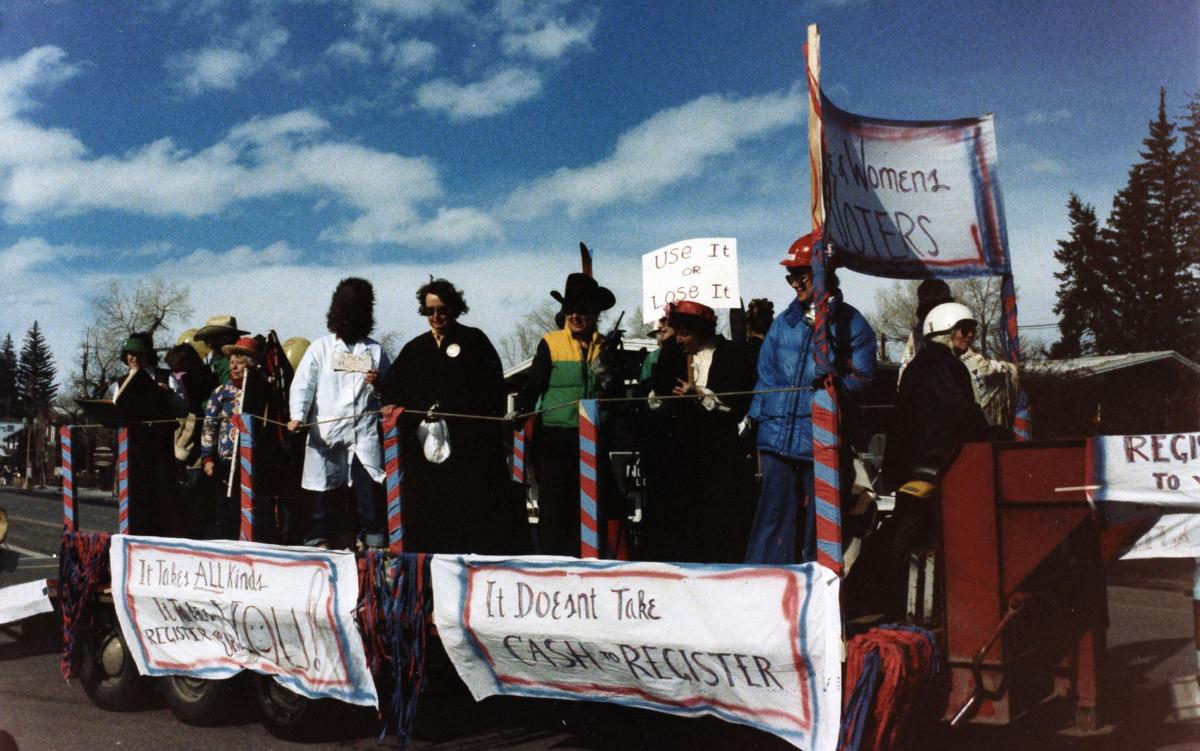 The League of Women voters represent with pride during the 1990 Wintersköl parade. 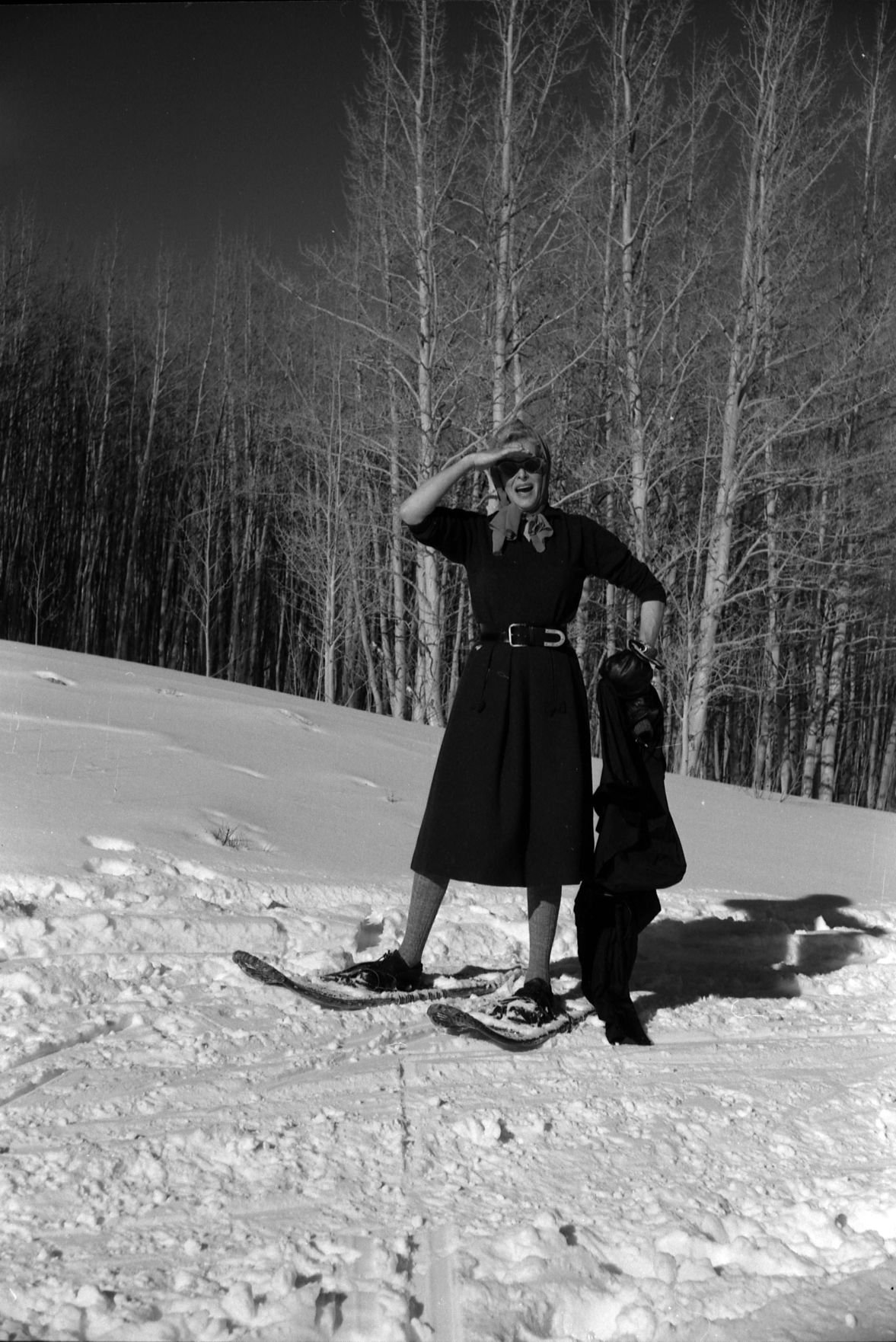 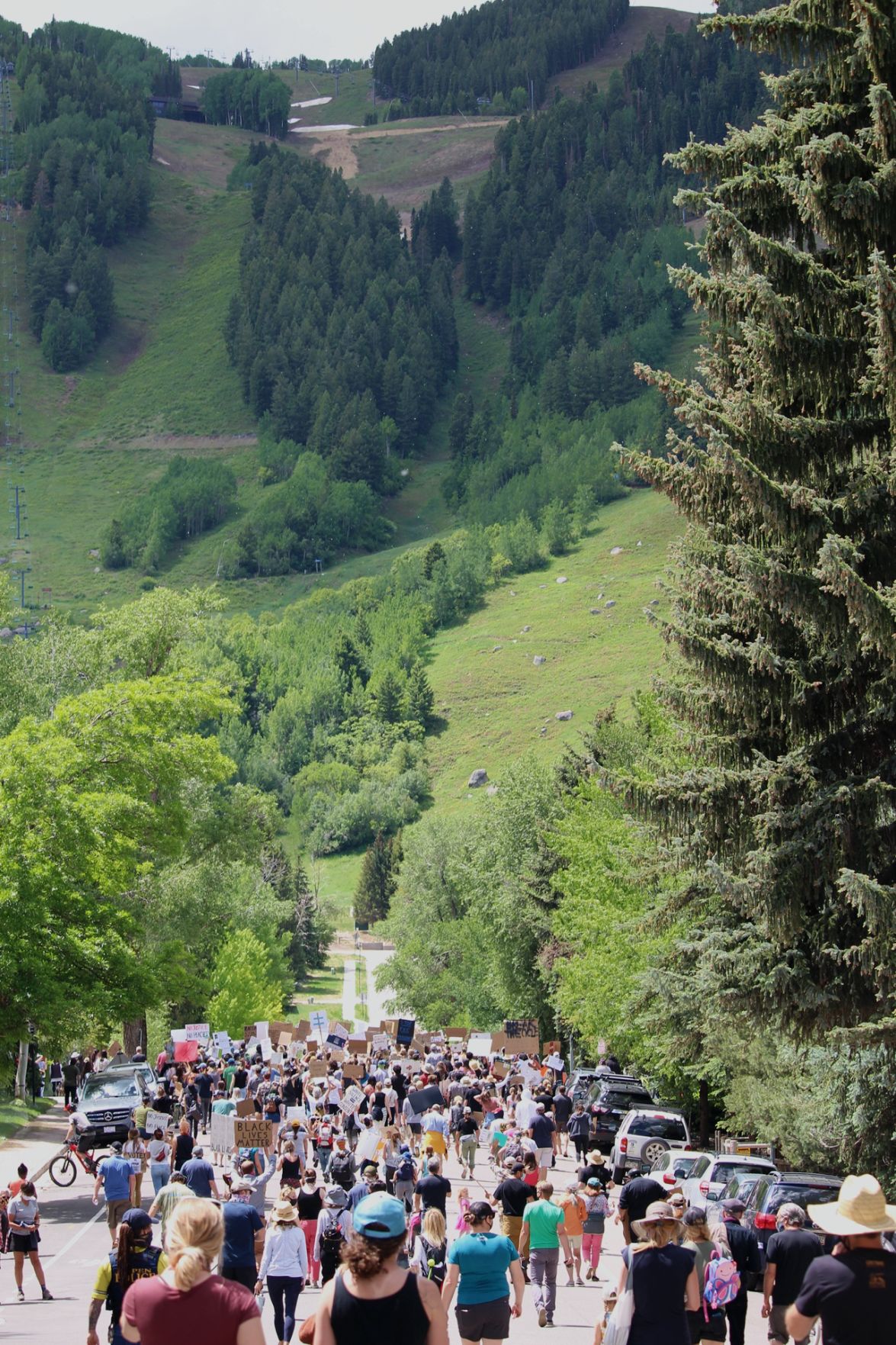 A Black Lives Matter protest in downtown Aspen in June.

Like any widow trying to start over, after Davis Hanson Waite lost his wife in 1890 he relocated. He moved from Leadville to the Roaring Fork Valley, first opting for Ashcroft, which at the time was a bustling mining town of several thousand people, home to six hotels, 20 saloons and two newspapers. The East Coast native had been politically active in his gradual move from New York to Colorado—with stops in Missouri and Kansas—and he continued his civic engagement by working for one of the papers.

But Waite soon realized the gritty town was no place to continue raising the two children he’d been left with after his wife died, so they moved to Aspen. He bought a house on the corner of West Francis Street, which would later be occupied by Bauhaus architect Herbert Bayer. (The home still stands today in the West End, surrounded by its iconic, and historically preserved white geometric fence and towering cottonwoods.) He founded The Aspen Daily Times (now The Aspen Times) and launched his campaign for governor of Colorado, running on a Populist platform.

“He was always sort of looking out for the rights of the working and common man, and he was distressed by the stratification of America at the time,” says Mike Monroney, an Aspen Historical Society historian. “Families like the Rockefellers, Carnegies and J.P. Morgan were making millions off of the labor of people who were barely getting by.”

This set the stage for one of Waite’s most notable achievements: In 1893, Colorado became the first state in the union to grant women the right to vote by popular vote, nearly 30 years before the 19th Amendment was ratified into the U.S. Constitution in 1920. (Wyoming, still a territory, allowed women to vote, but it was enacted by a legislative decision rather than referendum.)

This year, a century later, we celebrate women’s suffrage. Before the law passed in Colorado, there had been dozens, if not hundreds, of attempts to push it through during the 1880s. Ironically, unfortunately, and just realistically, women needed men to grant them suffrage. It was not a women’s-specific issue. It was political, and this was politics.

A few of the reasons it made sense for men to support the movement included women’s increased role in land and business ownership as the country moved West. The Populist party needed to expand its electorate, and perhaps realized the greatest opportunity was with women. The economy was crashing after the devaluation of silver. All of these factors and more led Waite to make suffrage a priority.

“It was probably some political payback for [women’s] support during his campaign,” says Monroney, “but I think he truly believed at the time it was the best thing to do.”

Fast-forward a generation to Elizabeth Paepcke. On a whim, Paepcke visited Aspen in 1939 with some friends. At the time, the town was dilapidated and quiet, suffering from the post-mining economic downtown. People found ways to pass the time, and restless residents were towing people up Aspen Mountain in a boat on the snow. Then, they would ski. This was Elizabeth’s introduction to the Roaring Fork Valley. Exhilarated by the experience, she returned to her husband, Walter, in Chicago and convinced him to visit. He was the CEO of a major corporation, but also saw the potential in seeking refuge in an idyllic mountain town.

Within years the two embarked on an ambitious plan to develop Aspen as a skiing and cultural destination, an escape for people in cities and a place where spirituality and physicality could progress. They capitalized on the momentum of World War II veterans from the 10th Mountain Division returning to the states with a passion for skiing.

“We were founded on the ‘Aspen way,’” says Rana Dershowitz, Aspen Skiing Co.’s senior vice president of real estate and chief legal counsel. “That idea was bringing leaders to Aspen to educate them and give them a new perspective, and then to send them into the world to make it a better place.”

That is why SkiCo continually inserts its voice in global conversations beyond just skiing today, says Dershowitz.

“We’ve become bolder in the past four or five years,” she says. “We’re more deliberate, but many of these issues intersect. We want to engage in civic—and civil—discourse, build new perspectives, and go beyond the old-school divides about what can be best for our country.”

In recent years SkiCo has made assertions around climate change, LGBTQ rights, immigration, racial justice, gender parity and voter turnout. SkiCo is partnering with Aspen Historical Society in an Aug. 18 celebration of the 19th Amendment. (Though SkiCo was founded by the Paepckes and Austrian ski instructor Friedl Pfeifer, today it’s owned by the Crown family of Chicago.

SkiCo CEO Mike Kaplan penned an op-ed in The Wall Street Journal in December 2016 that referenced Aspen’s roots: “When my thoughts turn to the founders of skiing in Aspen—particularly the 10th Mountain Division origins of our resort—I’m humbled. These men had just returned from fighting fascism in Europe, one of humanity’s greatest struggles for its own soul, and the next thing they thought to do was help build a ski area. That—and the fact that wounded veterans still come here to recuperate—is a powerful commentary on what skiing can do for a person’s humanity and sense of place in this world. It also makes me wonder: do we owe those 10th Mountain vets something?”

Kaplan addressed core issues under attack by the Trump administration, while noting that Aspen “is not the most diverse melting pot in the nation”—nor is the ski industry at whole—but, “our business and our principles are at stake, and we remain resolute in our commitment to ensuring a stable climate and a tolerant civil society.”

In a recent newsletter from Aspen Skiing Co. regarding Black Lives Matter, Kaplan acknowledged that white privilege is at a peak in Aspen, but noted that, “We will persist until social justice is served, and we will not tolerate a return to complacency through silence.”

Some critics argue that ski resorts should stick to skiing.

“Everybody has to speak. If you say it’s a women’s issue, you have to recognize that it’s a human issue. Society only works when it works for everybody. And the same is true for racial diversity.”

In 2018, 16.7% of skiers in the United States were Black, according to a Snowsports Industries America report, up from 8% in 2014. Another 10% were Asian and 12% were Latino, with almost 60% being white. Closer to home, about 90% of Aspen-Snowmass visitors are white, according to SkiCo spokeswoman Tucker Vest Burton. This is comparable to many Western ski resorts, she says, which are farther from metropolitan areas.

Mick Ireland is familiar with Aspen’s electorate. He was a Pitkin County Commissioner for 13 years and served as Aspen’s mayor for another 6 years before being term-limited. He still studies local voter demographics, noting that in the last presidential election, 70% of Pitkin County voted for Clinton. The town has notoriously leaned left since its start.

“Pitkin County carried Davis Hanson Waite [the definitive 1892 election] by a margin of 60/40,” says Ireland. “That started the long, dark road to liberalism,” he quips.

Seventy percent voted for Clinton and Pitkin County had a 70% voter turnout in 2016, according to Pitkin County Clerk and Recorder Janice Vos Caudill. Presidential elections of course see more voters, but the county’s voter turnout has increased in the past 10 to 15 years in all elections. She says the numbers have risen for several reasons, including Colorado’s 2013 bill that now sends a mail ballot to all active registered voters; early voting; and election day voting which allows people to vote at any center in the county.

Vos Caudill describes the local voting population—there are somewhere around 12,850 registered voters in a county with about 15,000 eligible voters—as “astute.” Colorado is known as the No. 1 voting model in the United States, with the second-highest voter turnout in the U.S. (next to Minnesota), the third-highest voter registration per eligible registrants and the fourth-lowest voting wait times at the polls. “Colorado continues to be a leader in the U.S., as it was 100 years ago, in relation to elections,” she says.

That all said, there is room for improvement, says Ireland.

“I’d like to see everyone voting,” he says. “The Jeffersonian ideal originally proposed that one day a week be devoted to civic affairs. … We’re a long ways from that. A lot of countries do better than we do in terms of turnout percentages.”

But even with high voter turnout and a predominately progressive population, the electeds remain mostly white and male. Though it could not be confirmed by historical records, it is likely that Aspen has never elected a person of color to its council, and only three women have served has mayor. And that’s just the local race; the presidential election also looms.

The Covid-19 pandemic will present its own challenge in terms of campaigning this fall. Though voters can mail in their ballots, local candidates in the Pitkin County commissioner race who typically canvas door to door in neighborhoods will have to be creative in reaching voters.

In June, hundreds of protesters showed up for multiple weekends to support the Black Lives Matters movement. Marching through downtown, they shouted, “This is what democracy looks like!”

This fall will reveal if Aspen continues to be a leader in civic engagement.