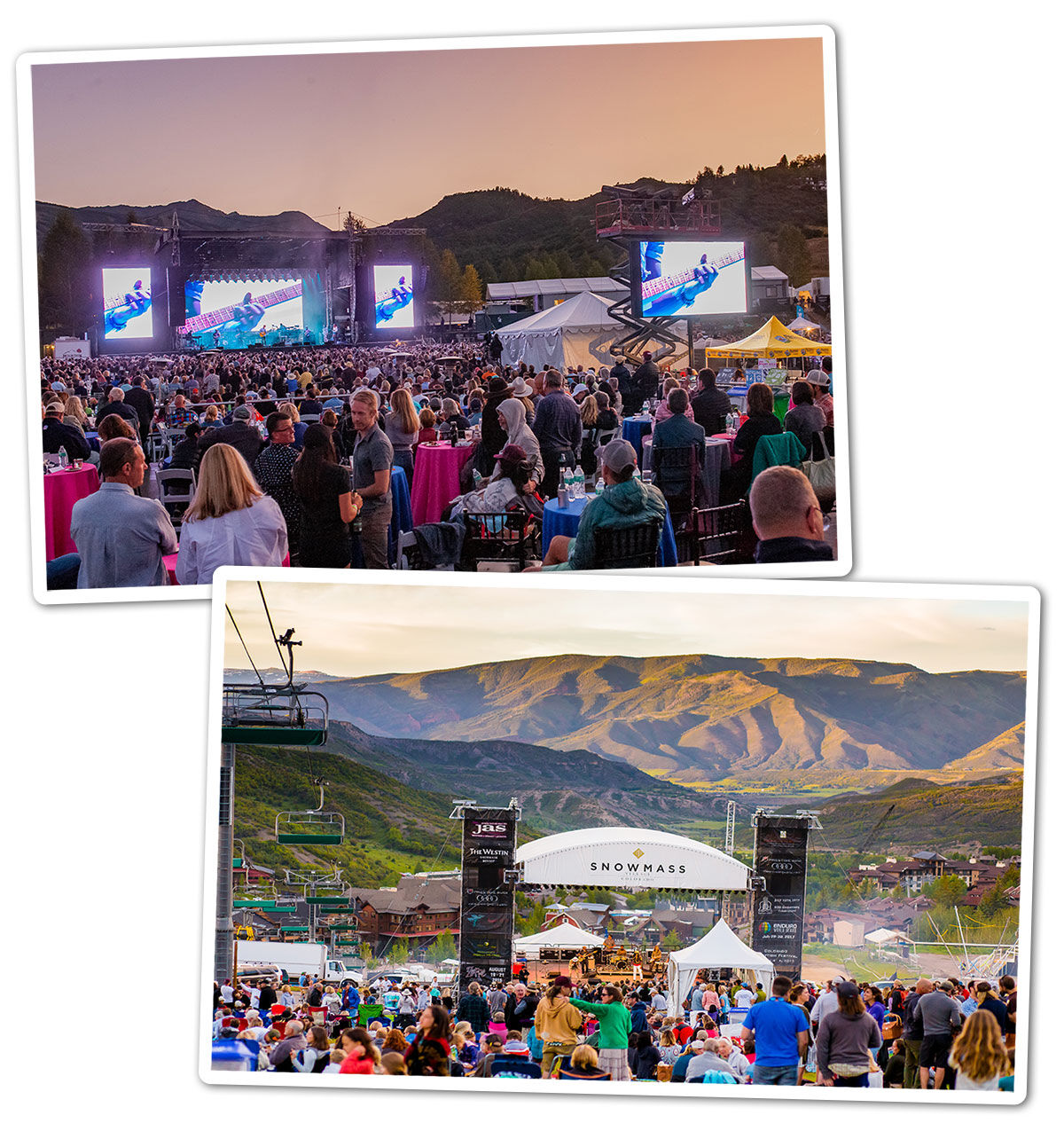 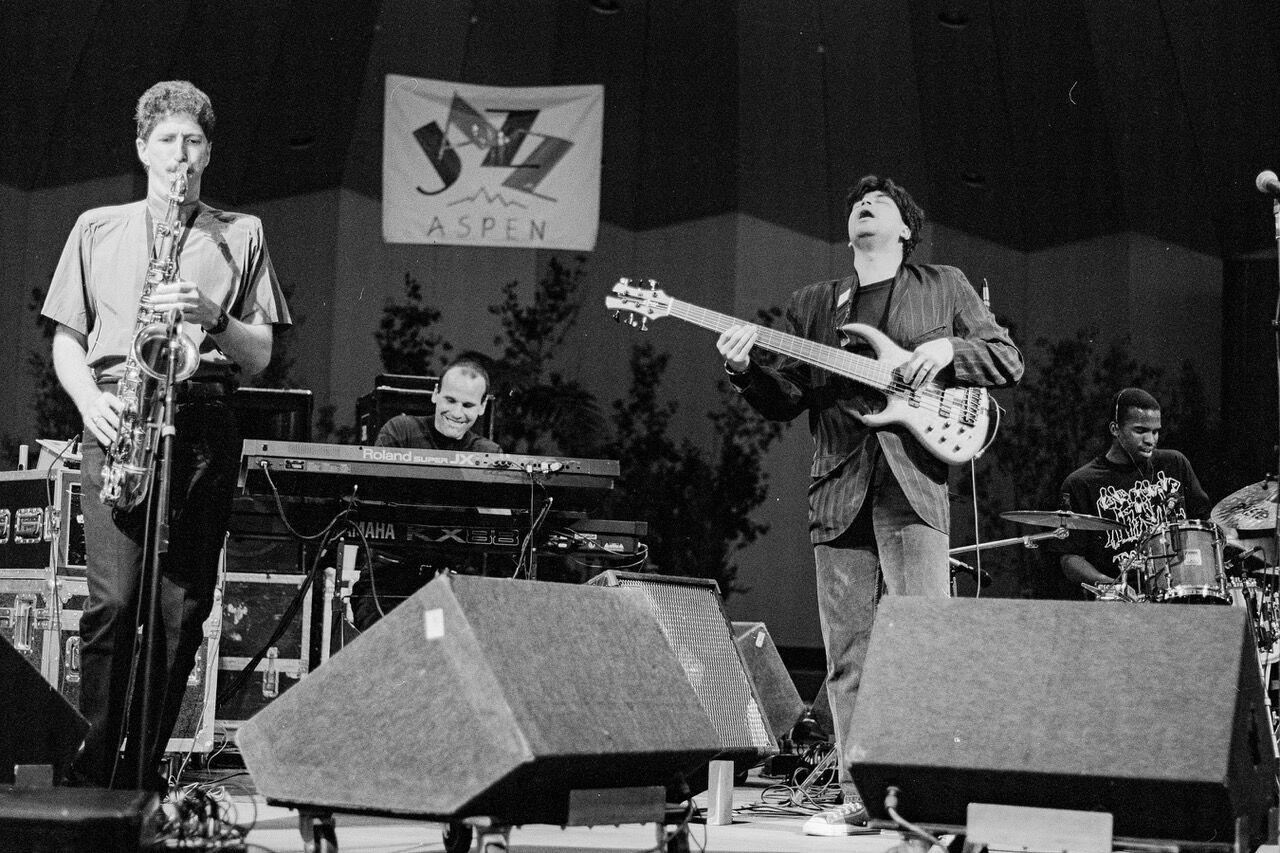 Yellowjackets performing at the inaugural JAS June Experience in 1991.

A robust live-music lineup in Aspen Snowmass brings an end to a largely quiet year.

The cascading announcements of returning festivals and events was music to every Aspenite’s ears, as well as anyone who’s ever watched a band play as the sunset illuminates Fanny Hill on a Thursday summer evening.

The enthusiasm for punctuating the awful silence wrought by the pandemic with live music and opportunities to mingle is palpable. When the Aspen Music Festival & School (AMFS) summer season tickets went on sale, the frenzy made records for the organization: Sales that typically occur over four months instead sold in just three days. Not to fret, though. AMFS’ debut Music on the Go series, free hour-long student concerts at Smuggler Park July 27-29 and August 3 and 10, don’t require tickets. And the much-beloved 4 p.m. Aspen Festival Orchestra concerts at the Benedict Music Tent are also making a return this summer, which means the lawn outside will soon be packed with people, blankets and picnic spreads.

And for the people behind the curtain, there was no escaping the pressure. To say “the show must go on” was a bit of an understatement for the likes of Jim Horowitz, President and CEO of Jazz Aspen Snowmass (JAS), and Sara Stookey Sanchez, Public Relations Manager for Snowmass Tourism. It takes weeks, often months, to pull off the kind of large-scale, high-visibility events they oversee—and that’s when a pandemic wasn’t part of the equation.

Horowitz assures there was never a chance JAS wouldn’t celebrate its 30th anniversary this year. To wit, the nonprofit is—as promised—bringing back Stevie Nicks and the rest of the 2020 JAS Labor Day Experience lineup for this year’s event. But music fans don’t have to wait until summer’s end for JAS performances. “We made a decision: We released our lineup for the June JAS Café series back in April, when the world did not look the way it does right now,” says Horowitz of the intimate jazz performances that take place in venues across town. It was a bet that’s paid dividends. Already, eight of the 10 performances are sold out, just one more indication that people are jonesing for ambiance that’s not their living room.

“I think it’s less about, ‘Can we produce the concerts?’ but more about how the concert series means so much—not just to the Snowmass community but to the whole Roaring Fork Valley,” says Stookey Sanchez of the Thursday concerts on Fanny Hill. “We’ve found it doesn’t really matter what the genre is or the band; people just love the atmosphere.” In addition to resurrecting the much-beloved free Thursday concerts, there’s also Fridays on the Mall, a more intimate vibe where people can be “whisper-distance” from musicians while hanging at local restaurants like The Stew Pot.

When reflecting beyond the logistics, Horowitz echoed Stookey Sanchez’s sentiments about the universality of relishing live music. “If you like music, you know how powerful it is,” he says. “Our job is to be the connector behind artists and audiences—we should be invisible. All we do is create the canvas, and the painting is what the artists do. And then the audience gets taken along on that joy ride. It’s very powerful. Honestly, I expect a lot of tears.” aspenmusicfestival.com; jazzaspensnowmass.org; gosnowmass.com.

A Concert Three Decades in the Making

This year marks the 30th anniversary of Jazz Aspen Snowmass (JAS) and returning to the Rockies to help celebrate is Grammy-award winning ’70s jazz-fusion group Yellowjackets, who were the first band to perform at the inaugural JAS June Experience in 1991. They return July 10 as part of the JAS Café series with two intimate performances taking place on the roof of the Aspen Art Museum.

What do they remember most about that Aspen show so long ago? The altitude. “It was the first and only time we’ve had oxygen on stage for the saxophonist, Bob Mintzer,” says Yellowjackets’ original member, pianist Russell Ferrante. “I also remember the crowds of locals flooding the lawn outside and bringing energy to the show, even from 100 yards away.”

And while the group—comprised of Ferrante, Mintzer, drummer Will Kennedy and bassist Dane Alderson—is used to performing more than 100 concerts a year for the last 44 years, their upcoming show will be a reunion of sorts. “It will be our first concert since early March of 2020,” says Ferrante. “I’ve never gone [this long] without playing with other musicians live.”

The show also reunites Yellowjackets with their local fans—so much so, both shows are sold out with a wait-list. “The setting of Aspen is incredible, and there will be a lot of energy. I hope people will be hungry for that experience again and that our excitement will translate.”