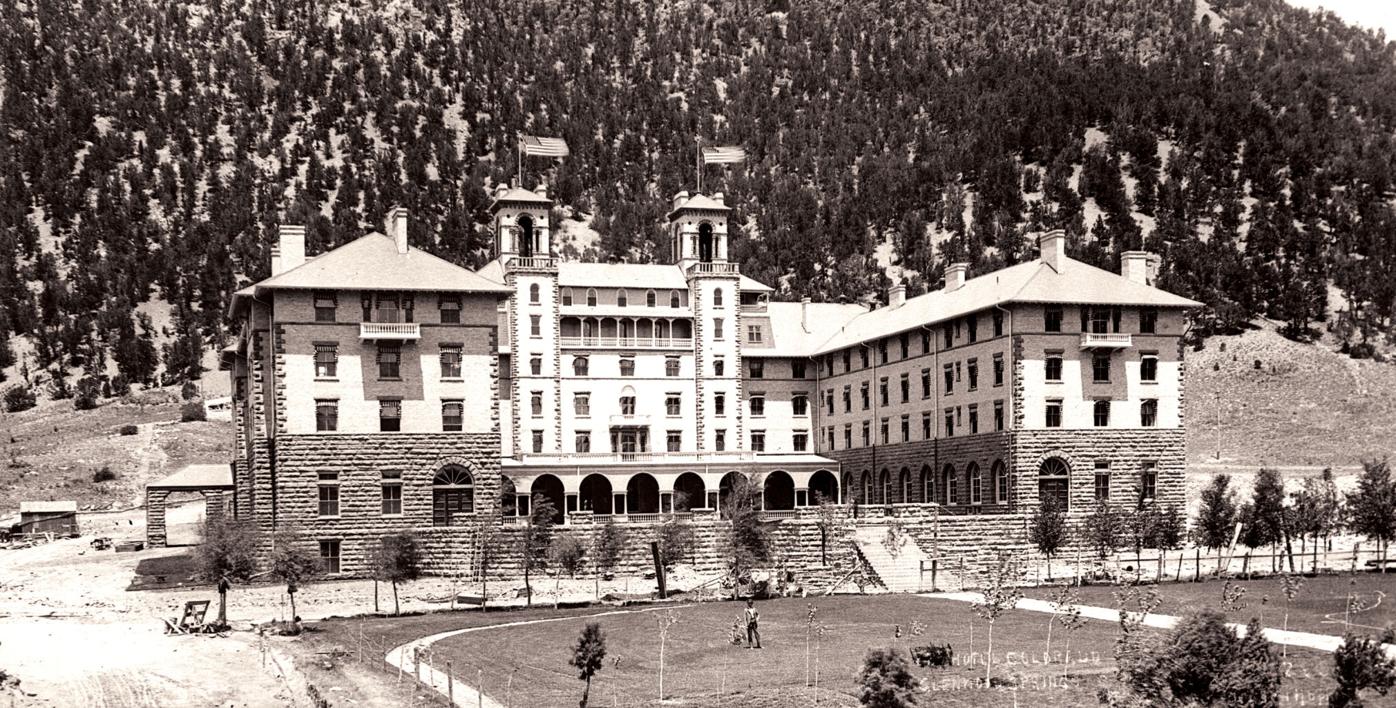 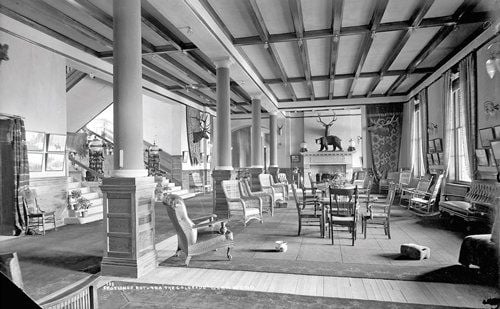 An entertaining space in Hotel Colorado. 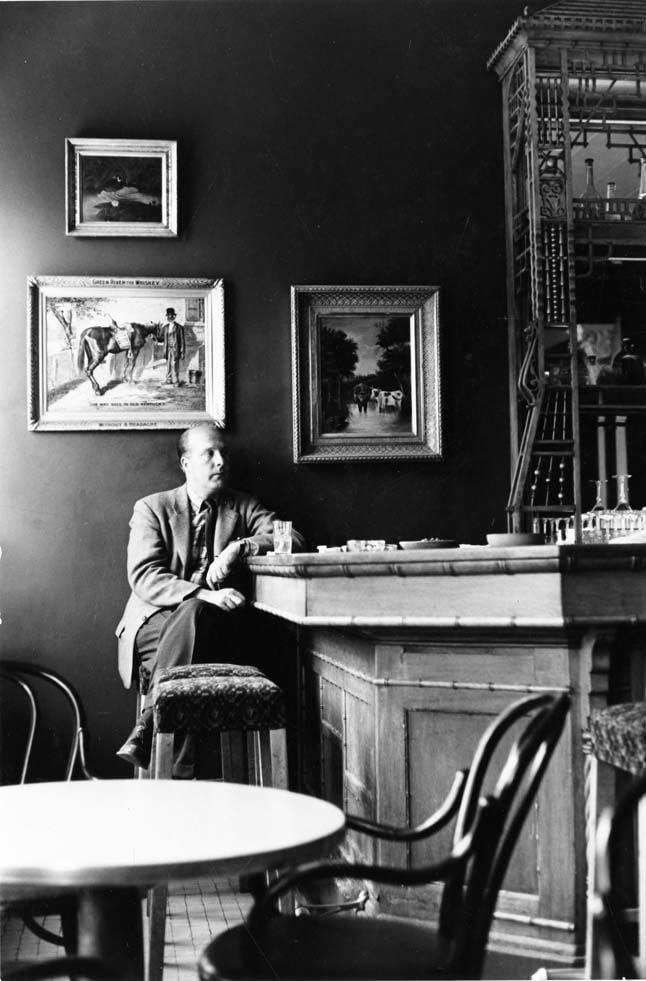 A patron of the Hotel Jerome’s iconic J Bar. 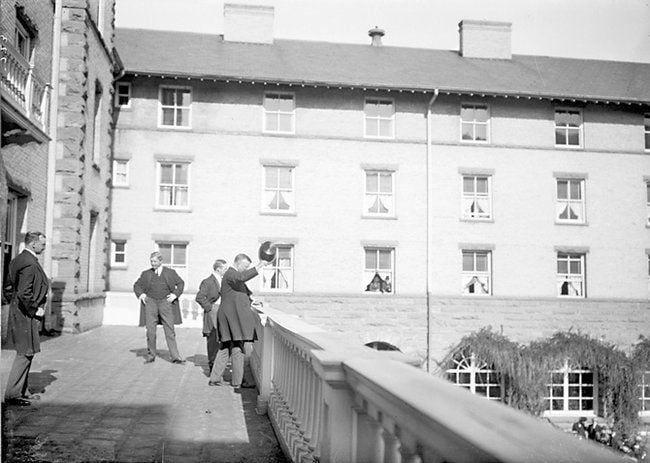 President Teddy Roosevelt on the balcony of Hotel Colorado. 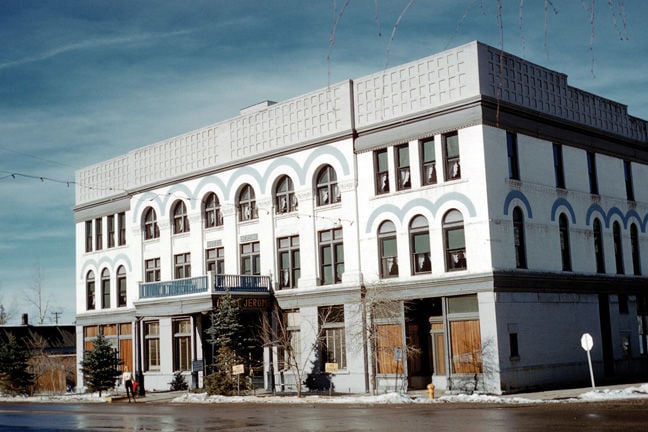 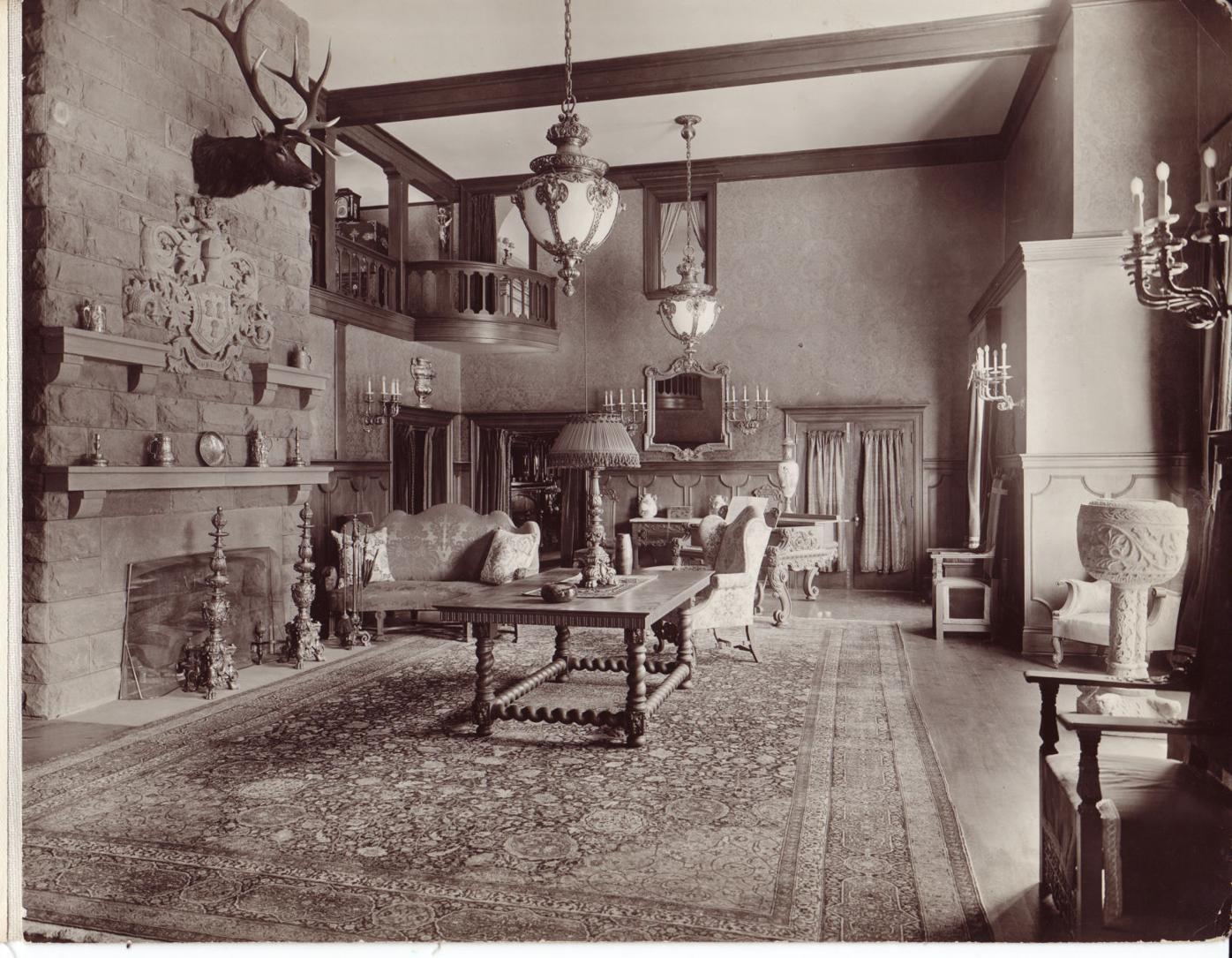 The dining room of Redstone Castle. 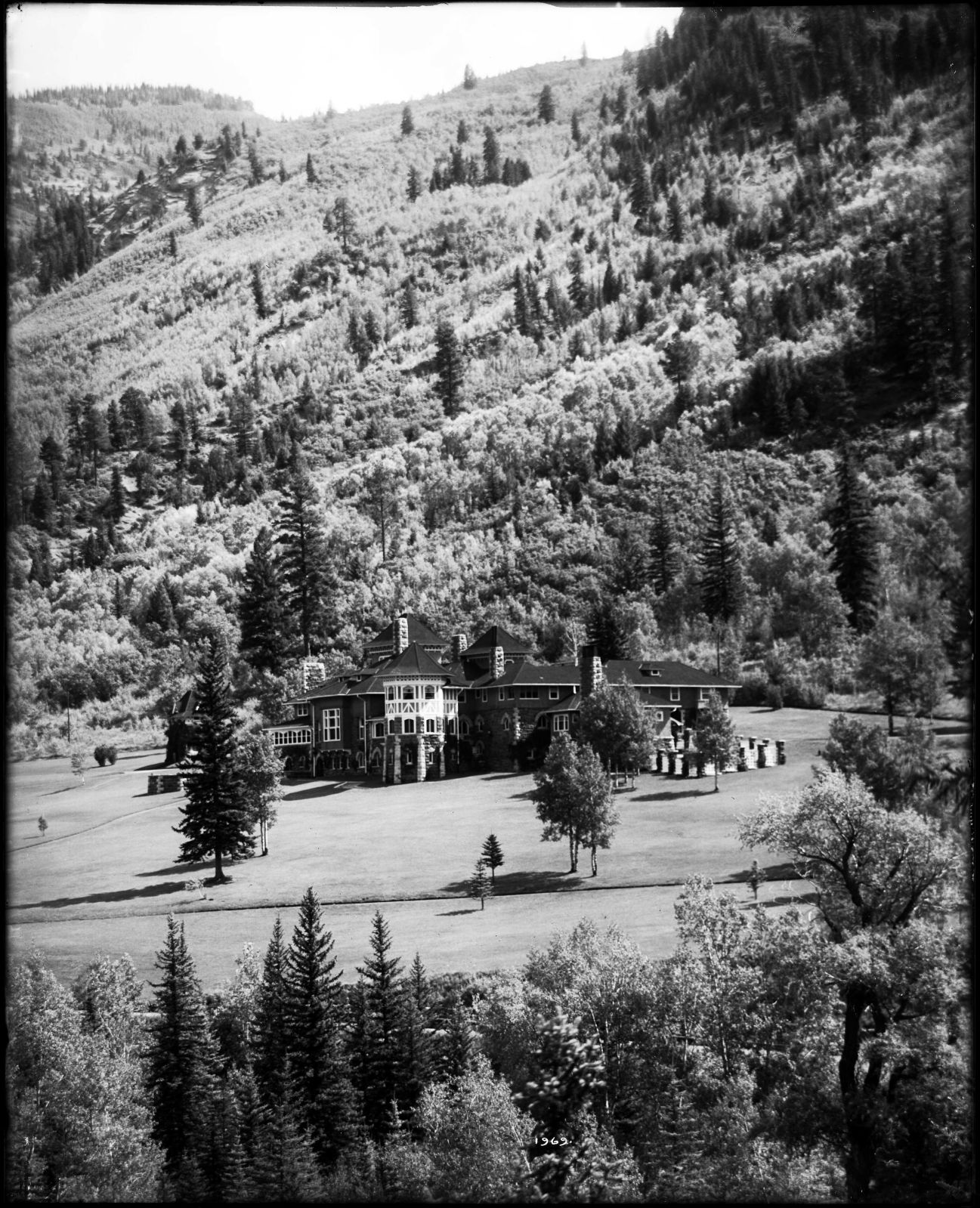 As one of the world’s largest silver producers in the late 1800s, Aspen has been a mecca for luxury for more than 120 years. When the mines were booming, some of the first developments in Aspen and its surrounding areas were lodging for the influx of wealthy visitors searching for rare metals and promises of pristine wilderness. Today, pillars of the Valley’s mining-era magnificence can be found within Aspen’s Hotel Jerome, Hotel Colorado in Glenwood Springs and Redstone Castle, places where one can stay like a silver baron while being surrounded with rich history.

In 1889, business was booming and silver was being mined at a record pace. Out of nowhere, it seemed, a town was born and amenities were needed. Jerome B. Wheeler—a wealthy industrialist from New York—commissioned two innkeepers from Kansas to develop a site on Aspen’s Main Street into what would become Hotel Jerome. Wheeler envisioned an extravagant hotel that would rival the Ritz Carlton in Paris, complete with all of the modern amenities of the time—steam heat, electric lighting, plumbed cold and hot water—as well as the first elevator in Aspen. The property cost more than $150,000 to build.

When the Hotel Jerome opened its doors on Thanksgiving eve of that year, it was one of the finest properties in the West, a pinnacle of luxury for the time. The moment was short-lived, however, as the mining boom died only a few years later. The hotel fell into disarray and continued as a humble boarding house until Chicago businessman Walter Paepcke breathed new life into the property as

part of his investment efforts in the late 1940s.

For a moment, the Hotel Jerome was painted completely white, re-imagined by famed Bauhaus architect Herbert Bayer. Through the ’60s and ’70s, the space served as a lodging house with a number of businesses in it, including a tailor and a barbershop. At one point, classrooms occupied parts of the property in order to keep it afloat.

In the 1980s, investors restored the Jerome to its original brick facade and updated its interior, allowing the property to re-emerge as one of the nation’s most prominent historic hotels. Since its latest update in 2012, the Jerome’s Living Room—a brilliant fusion of historic reflection and modern sensibility—has become a cozy, uber-popular spot to grab a drink or bite with friends. Meanwhile, the hotel’s J-Bar, one of Aspen’s most iconic local haunts, still bears the original wood on its back bar. (It’s also rumored that around 40 percent of the hotel’s art dates back to its first iteration). Stop by the Hotel Jerome this winter and help celebrate its 130th year.

A few years after the Jerome was built and the benefits of the silver boom continued to spread, Walter Devereux built Hotel Colorado, an homage to a 16th-century Italian villa on the edges of Glenwood Spring’s famed hot springs. Devereux, a coal tycoon who made his fortune in silver, spared no expense in the hotel’s construction. Referred to by many as “The Grande Dame,” the property’s European-style spa, tennis courts and Victorian gardens brought a luxurious sensibility to Colorado that had previously not existed.

The hotel featured a grand fountain in the courtyard, modeled after a water feature from the 1889 World’s Fair in Paris. The fountain, which shot water 180 feet in the air, became an attraction unto itself. Inside the hotel, a 25-foot waterfall cascaded into a pond in the center of the restaurant, where, for a while, trout were stocked and guests could select their dinner personally.

Hotel Colorado became a frequent stopping point for wealthy travelers of the time. Presidents Teddy Roosevelt and William Taft both stayed at Hotel Colorado during their stints in office. In fact, while hunting in the early 1900s, Roosevelt stayed at the hotel many times. According to local lore, the famed “Teddy Bear”—as it came to be called—derived from Roosevelt’s time hunting in the Valley: After an unsuccessful bear hunt, the hotel staff gifted the former president with a patchwork bear named Teddy. (Hence, the extensive collection of Teddy Bears at the hotel gift shop today.)

Further adding to the hotel’s history, the U.S. Navy leased the building to use it as a hospital during World War II. During that time, many of the hotel’s 170 original fireplaces were covered (the brick was too porous for the sanitary needs of the hospital) and most of the furnishings lost.

Today, Hotel Colorado’s 130 rooms are updated with modern creature comforts, making a stay there as lavish as it was in the early days.

The property, Redstone Castle, boasted 66 rooms and 14 fireplaces, all with different colored tile, a Russian-inspired dining room, a billiards room

(the original Brunswick pool table is still there),

and an English-style hall with a “peeping window” so Mrs. Osgood could observe her guests’ attire

before entering the room herself.

A marvel of craftsmanship, the castle featured an aluminum leaf ceiling in the library, multiple “balloon ceilings” (arched, lofted ceilings that required detailed work by hand), handmade wood inlay floors and hand-stenciled wall coverings. Despite the fact that a marble quarry existed only miles away, Osgood purchased marble from Italy to elevate the glamour of the design. (However, local marble was used in the entry to the basement.) The original steam-heat and forced-air system that heated the castle then are still used today.

Redstone Castle continues to be an extravagant and luxurious property thanks to an estimated 60 percent of its original furnishings remaining on-site, making a visit there feel like a step back in time. The current owners purchased the property in 2016 and have since performed extensive renovations, including restoring the original floor plan, helping return the property to its historical grandeur.

Most recently, with the help of the State Historical Fund, the owners completed a major exterior overhaul. And while all of the castle’s bathrooms still feature their original sinks and clawfoot tubs, the showers and plumbing have been updated to offer guests more modern amenities.