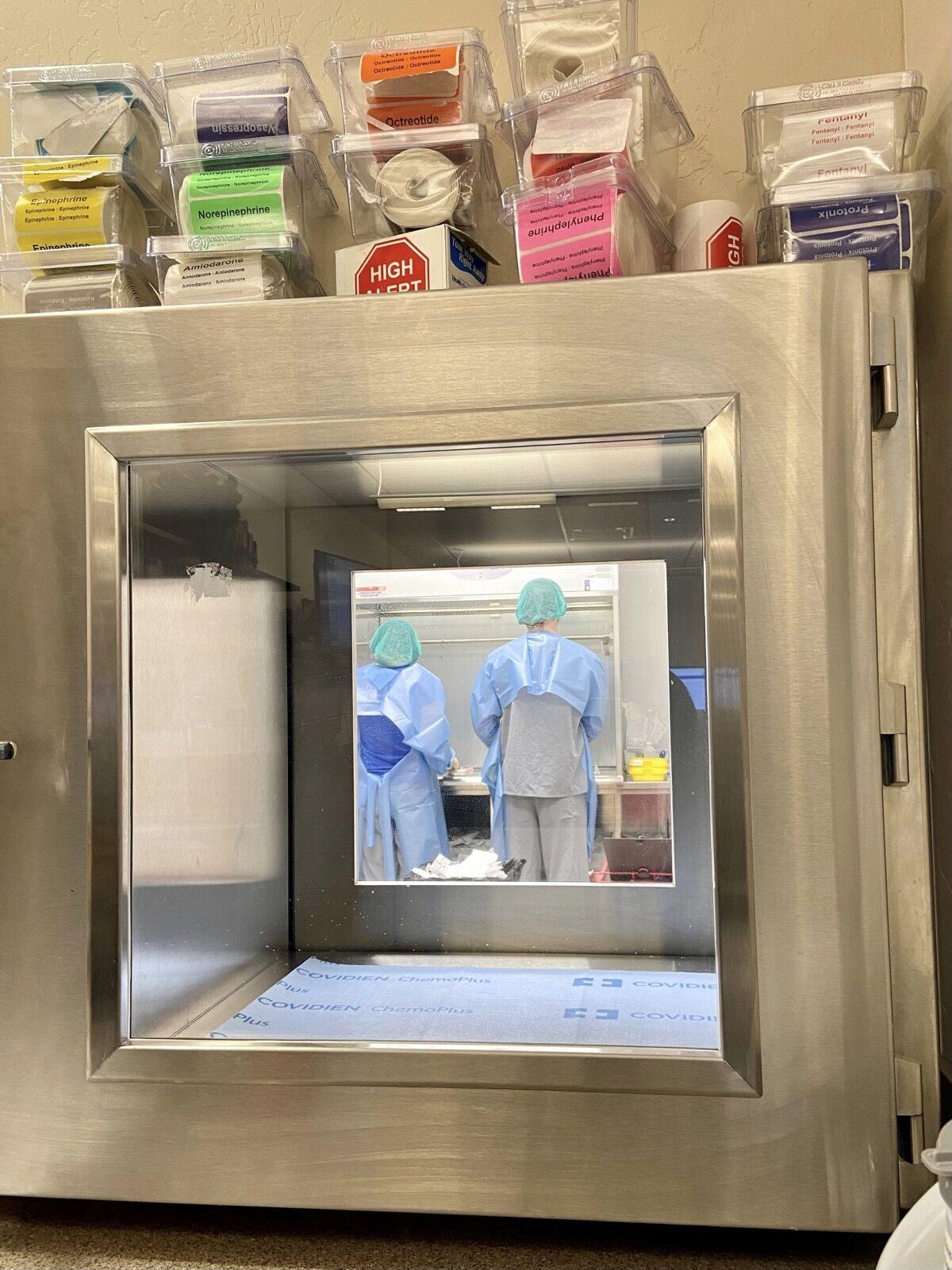 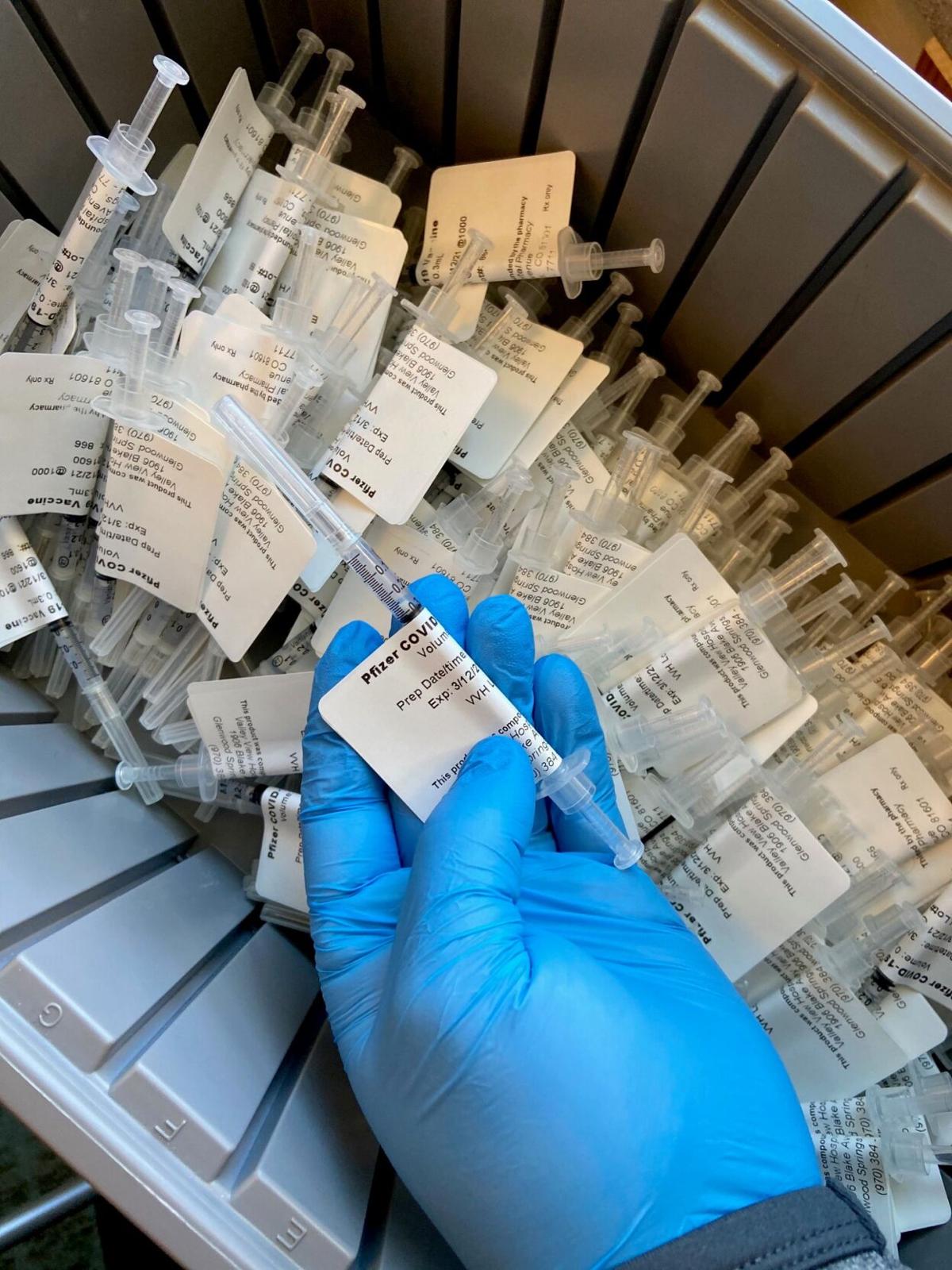 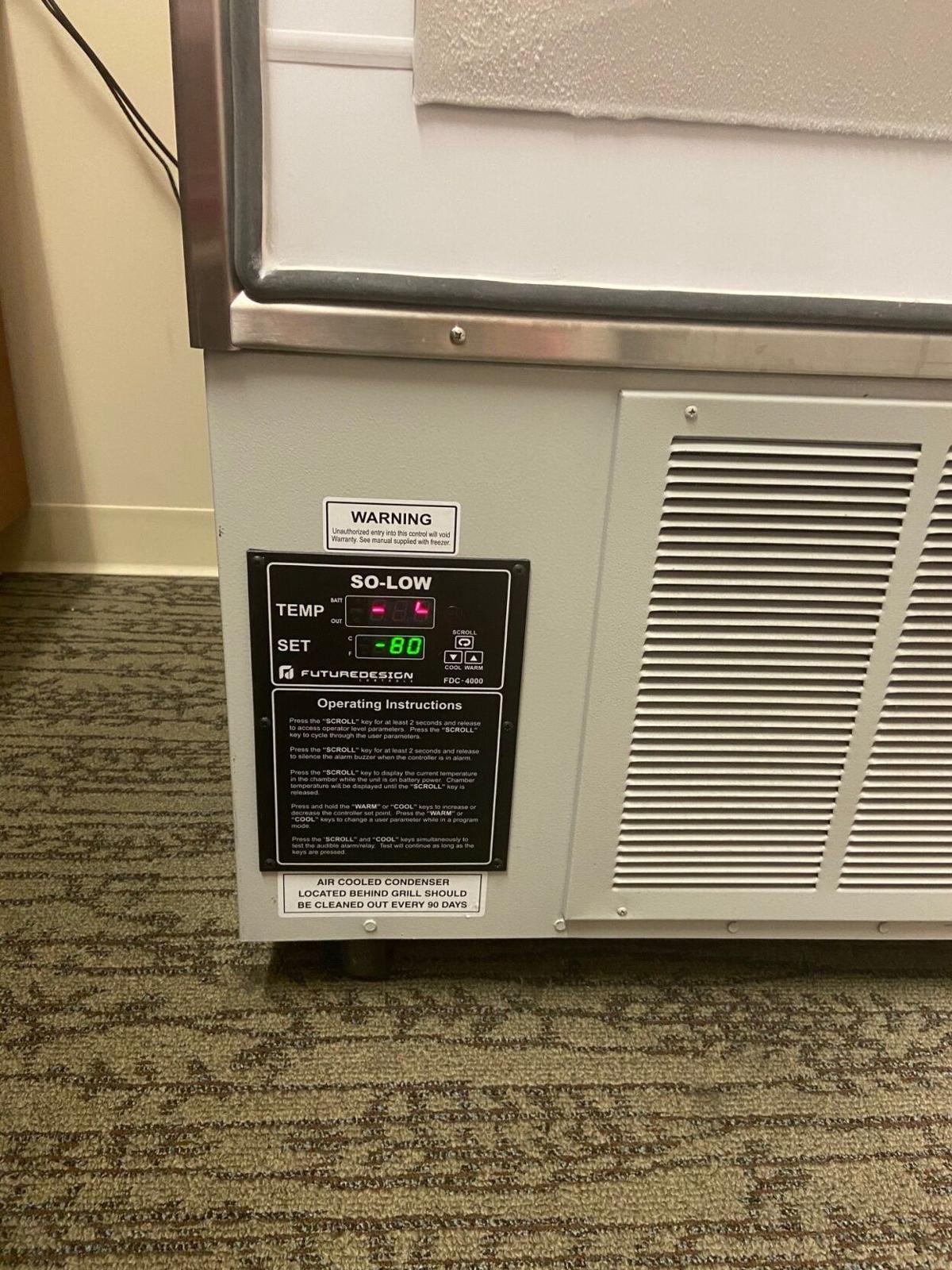 Pfizer’s “pizza box” might not include eight slices of hot, coal-fired pie but it does have 1,170 doses of ultra-cold, COVID-19 vaccine inside.

“You have to wear gloves because you will get burned,” Mark Russo, Valley View Hospital pharmacy director, said Friday afternoon as he pulled one of Pfizer’s so-called pizza boxes out of an ultra-low freezer. “They’re minus 80 [degrees Celsius].”

“We have to be really careful,” Russo said.

Friday, beginning at 4:30 a.m. in Valley View Hospital’s clean room, Russo and his colleagues start meticulously drawing six, sometimes even seven, doses of vaccine from each of the 195 vials contained within Pfizer’s pizza box.

“It’s a clean room, which is more sterile than an operating room,” Russo said of the highly-sterile and secure space. “They are in there for two or three hours drawing [vaccines] and then we have them take a break. They get that jump on the day and they’ll make 300 to 400 doses up ahead of time because we’re processing 174 patients an hour. So, we have to try to stay ahead of that.”

From drawing doses in the hospital’s clean room to administering shots in its conference rooms, Russo, in his 19-year career at Valley View Hospital had never witnessed, let alone taken part in an operation quite like vaccinating nearly 2,000 people in a single day.

Friday, beginning at 6 a.m. and lasting until 5 p.m., eligible individuals had their temperatures taken, were given hand sanitizer, and then maneuvered into Valley View Hospital’s conference rooms for their second dose of the Pfizer vaccine.

Russo, his colleagues at Valley View Hospital, and numerous community volunteers — once again — pulled off the monumental inoculation task on Friday and in turn protected close to 2,000 of their fellow community members from the virus. To date COVID-19 has killed over 550,000 people in the U.S. and more than 2.8 million people worldwide.

Valley View Hospital Chief Community Relations Officer Stacey Gavrell said in an interview Friday the hospital in Glenwood Springs would continue to host mass-vaccination clinics as long as they were needed.

“We’re trying to figure out what’s going to make the most sense for our community, knowing what’s on the horizon in terms of the variants, post spring break, and whatnot,” Gavrell said.

According to Gavrell, Valley View Hospital was in the process of assisting primary care practices so they could order COVID-19 ­vaccines, themselves.

“That makes sense because whether it’s a COVID vaccine, a tetanus shot or even your flu shot, so much of that immunization is in a ­primary care practice,” Gavrell said. “I would say we’re kind of in a transition phase right now. It has been all hands on deck for months now but it has also been really rewarding.”

In neighboring Pitkin County, local officials have discussed the possibility of concluding the county’s own mass-vaccination clinic around Memorial Day weekend. However, no such decision has been reached and despite having one of the most celebrated mass-vaccination clinics in the state, Pitkin County recently moved in the wrong direction on the state’s COVID-19 dial — from level yellow to the “high-risk” level orange.

On clinic days, Aspen Valley Hospital ­Director of Pharmacy John Anderson and between four and five of his colleagues start drawing doses of vaccine at 6 a.m. in a secure trailer, on site at the Benedict Music Tent parking lot.

“Once they get into a syringe there is a certain amount of time that they are viable. For Moderna you have up to six hours to still get that into the arm once you draw it up into a syringe but for Pfizer you only have an hour. So, we’re monitoring how many we’re drawing up to make sure it’s the same as the number of people that are coming in,” Anderson said. “We just have to keep monitoring.”

Despite all of the challenging handling rules, not a single dose of COVID-19 vaccine has gone to waste at Valley View Hospital or in Pitkin County, Gavrell and Anderson confirmed.

“We’ve drawn up over 15,000 doses since we started this back in December,” Anderson said of Pitkin County’s vaccination operation. “A lot of credit goes to a lot of different people.”

While mass-vaccination clinics occur in different settings in Garfield and Pitkin counties, the vaccines, themselves, arrive in the Roaring Fork Valley in similar fashion.

According to Anderson, Pitkin County’s doses of Pfizer vaccine arrive from Michigan, its Moderna doses from Mississippi, and its Johnson & Johnson doses (which Valley View has not yet received) from outside of Baltimore, Maryland.

Anderson said the vaccines’ temperatures are carefully monitored from the manufacturing site all the way to Pitkin County.

“They are actually in special coolers that were designed specifically for these [vaccines],” Anderson said. “They actually arrive just in a regular FedEx truck. They pull up and run them into the pharmacy.”