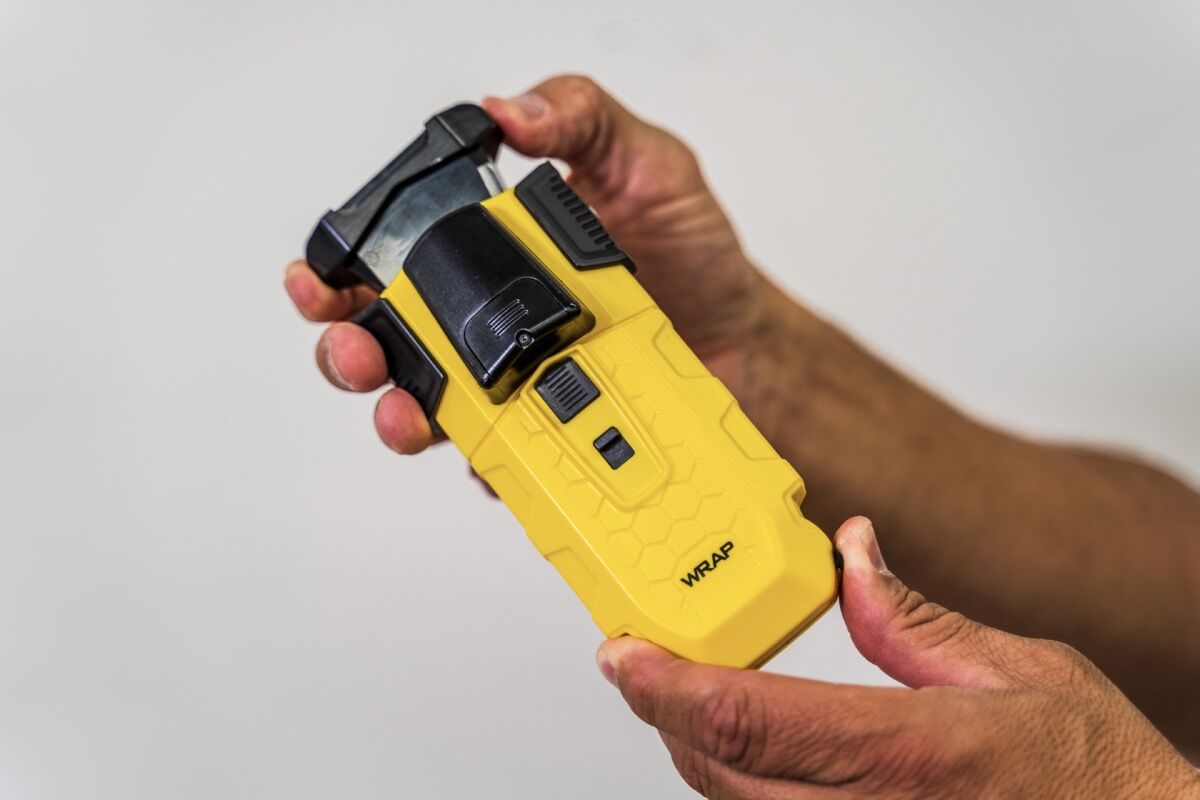 The BolaWrap unit is around the size of a large cellphone and can attach to the belt of a police officer. 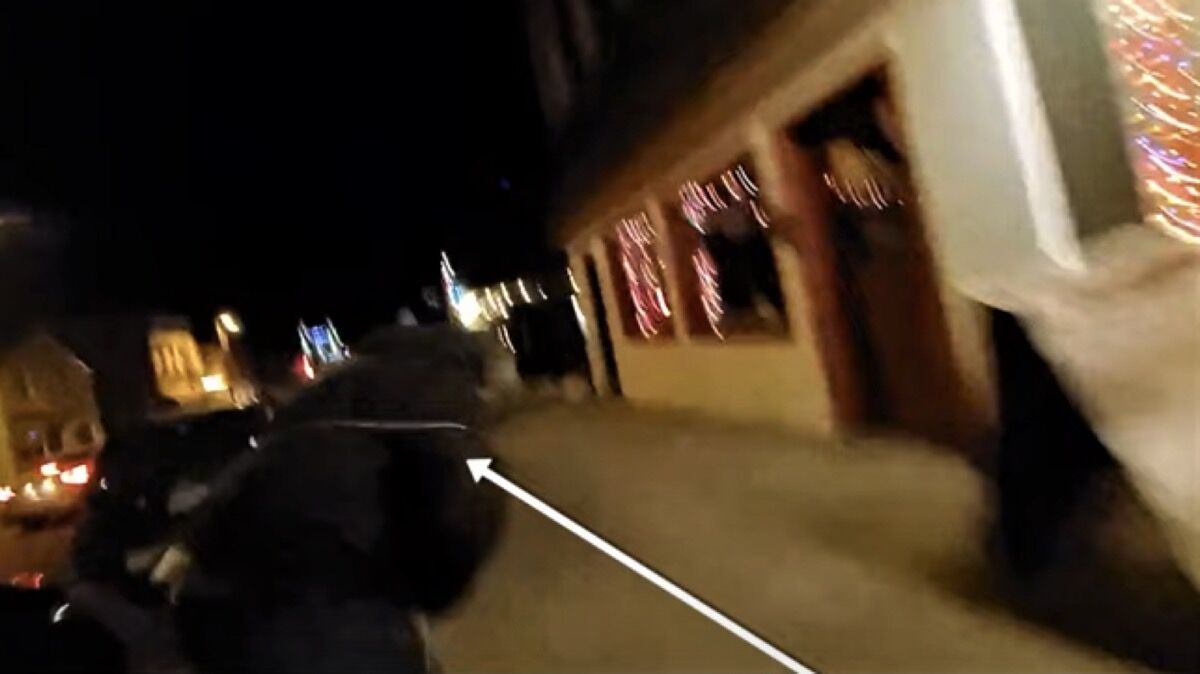 A screenshot of a recent BolaWrap deployment in Glenwood Springs, as captured from a police body camera. 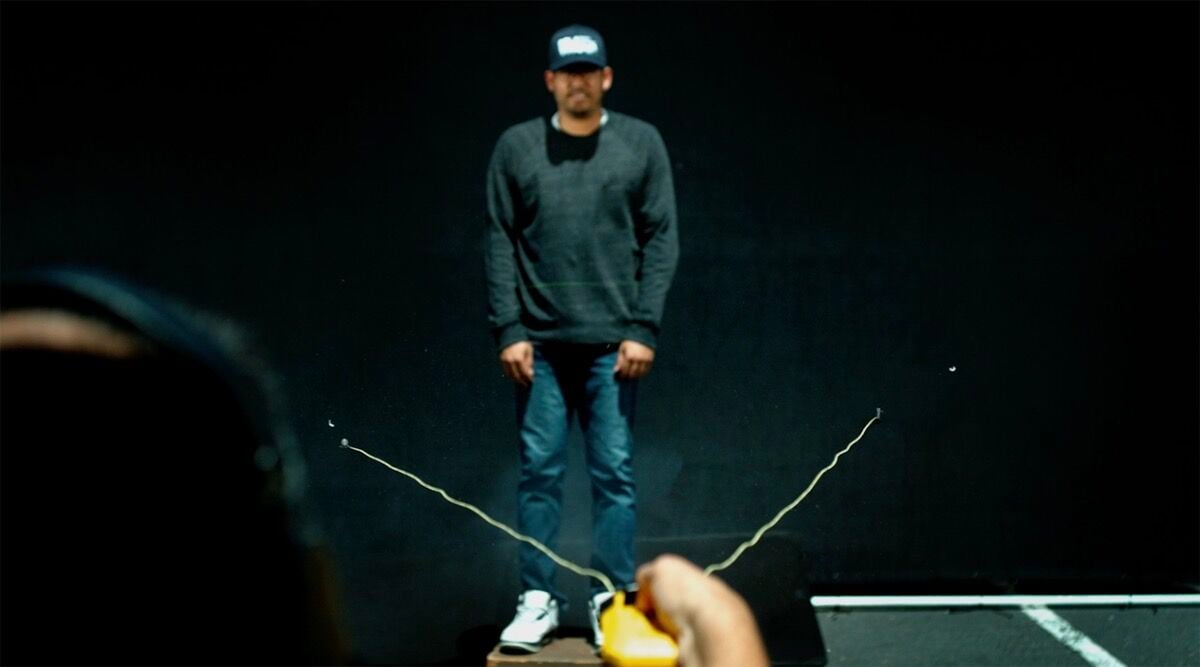 A demonstration of how BolaWrap works: The target must be between 10 and 25 feet away for the law enforcement tool to be accurate. 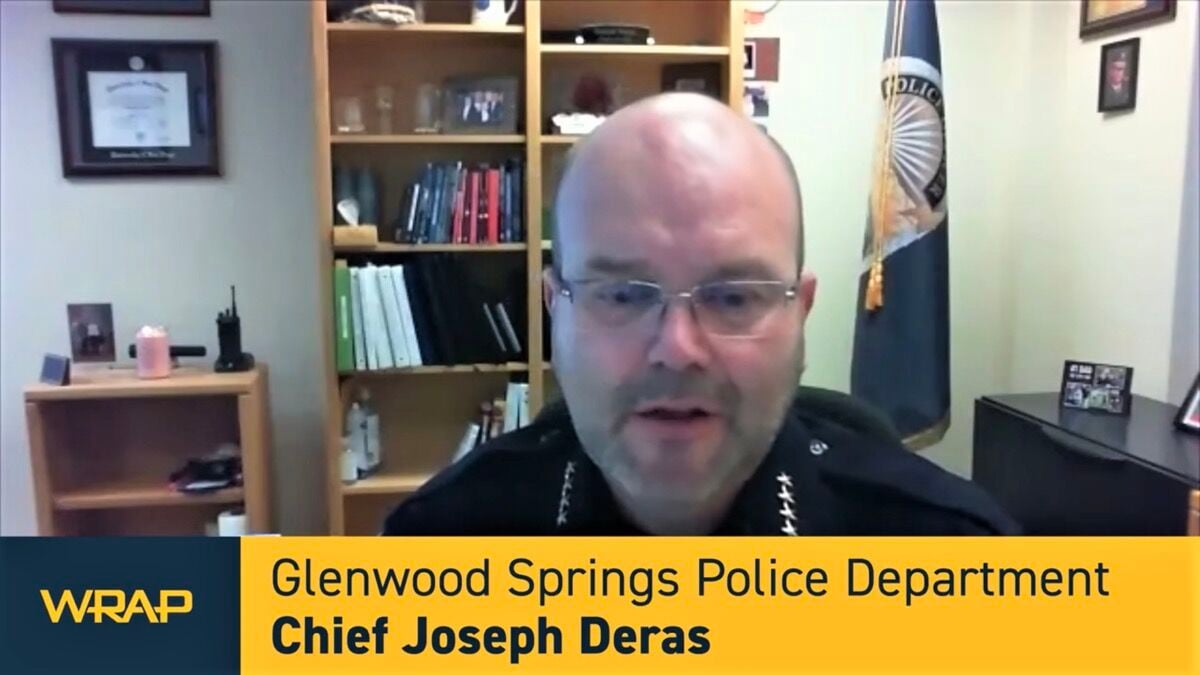 The BolaWrap unit is around the size of a large cellphone and can attach to the belt of a police officer.

A screenshot of a recent BolaWrap deployment in Glenwood Springs, as captured from a police body camera.

A demonstration of how BolaWrap works: The target must be between 10 and 25 feet away for the law enforcement tool to be accurate.

The man declines the officers’ requests, but communicates with them, saying, “I need help.” The officers attempted to make contact with him for several blocks following a business owner’s complaint that the man was vandalizing holiday decorations, smashing out lights in the downtown plaza.

As the man refuses their instructions several times and continues to walk away, one of the officers issues a call to action, shouting “Bola, bola, bola!” And suddenly, the man is subdued — first around the legs, then around the arms and upper torso — wrapped by a Kevlar tether cord that shoots from a handheld gadget several feet away.

An officer places handcuffs on him; the man says he doesn’t have a gun. Without further incident, he is placed into custody. The entire event can be viewed at youtube.com/watch?v=1MhhgRuiZX8.

The gadget, which police call a BolaWrap unit, is a “remote restraint device” marketed and sold by Tempe, Arizona-based Wrap Technologies Inc. It is not a lethal instrument and is designed to cause little or no discomfort.

In recent years, it has become increasingly used by law enforcement agencies across the U.S. and internationally — Pitkin County Sheriff Joe DiSalvo calls it “a tool we have just started researching” — in the wake of several highly publicized incidents in which police in other parts of the country have been held accountable for use of excessive force.

It’s used in situations in which police need to “de-escalate various encounters with noncompliant or resistive subjects,” Glenwood Springs Police Chief Joseph Deras said in a Wednesday news release. While it may seem unusual for a police department to issue an announcement about one of the tools or methods used to subdue a suspect, Deras wanted to highlight his department’s “effective and humane interaction with those who are either in distress or who choose to engage in criminal conduct.”

Deras said Thursday that his department’s use of BolaWrap is not new. In 2021, the city purchased six units at around $1,000 apiece, along with cartridges containing the Kevlar cord. The units are shared among his officers, and he would like to buy a few more. The Glenwood Springs Police Department has had to use BolaWrap to subdue subjects three times since obtaining the units 11 months ago, he said.

“We’ve had exceptional success with it,” Deras said.

Deras began serving as Glenwood Springs’ police chief in January 2020. Prior to that, he worked for nearly three decades in law enforcement in California.

“I was aware of this technology being used and tested in California and other parts of the country,” he said. “Before I came to Glenwood Springs I was able to evaluate what technology we had available to us to really minimize injury and risk to officers. And also for community members — in particular, when we’re dealing with people in mental distress.”

Deras said the criminal justice system “is not set up for police officers to be experts” in mental health. More often than not, the only outlet for officers has been to subdue a subject using various degrees of force and take them to jail. A high number of officer-involved shooting incidents nationwide have involved people in mental distress, he said.

“So this is a tool that I felt was another option for us so that we don’t find ourselves in situations like that and to contain the situation early in the contact so that it doesn’t escalate to higher levels of force,” he said.

In the Dec. 22 incident, according to Deras’ news release, officers noted that the man was making threats.

Specifically, he mentioned that he “wanted to be shot immediately;” he wanted someone to “come and kill the two officers;” and lastly, “he would kill the judge.” He also made unintelligible references to former U.S. Attorney General Janet Reno.

“His references to extreme violence raised concern for officers as they are dealing with someone who has vocalized homicidal ideations. That could create a very hazardous situation for all and fortunately the officers were able to safely end this situation without injury or further risk to others,” the release states.

In addition to the criminal charges for the vandalism in the area, the man also was arrested for an outstanding warrant from the city of Rifle for criminal trespassing.

Tom Smith, president and CEO of Wrap Technologies, said Thursday the company was created in 2017 and began shipping the BolaWrap product in 2019. It’s a public company (Nasdaq: WRAP).

Of about 18,000 law enforcement agencies nationwide, 700 are using BolaWrap. “Internationally, we’re in about 56 countries,” he said.

Smith is co-founder of Taser International (now Axon), which he started with his brother in 1993. Taser started the manufacture of electroshock weapons widely used by law enforcement to incapacitate subjects and suspects.

Tasers have been criticized for many years because of their ability to cause pain, and in somewhat rare instances, serious injury and even death.

“It’s been a rough 18 months on the domestic law enforcement community, with all the pressure on them from the tragic incident with George Floyd, the riots and protests to defund the police,” he said. “Internationally, it’s the same problem.”

Smith said within the law enforcement arena, technology doesn’t change quickly. He said when he learned of the concept that led to BolaWrap, he was excited to become a part of it.

“The last technology to really change law enforcement was the Taser,” he said. “All of those tools [like the Taser] are really pain-compliance tools. The BolaWrap was the first tool that I saw, in all my years, that really addressed that: to stop somebody without hurting them.”

Wrap Technologies doesn’t just make and sell the gadgets; it’s also involved in training law enforcement in its safe and effective use.

“We’re very excited about the difference that this is making and showing law enforcement that there is a tool like this available they can use to stop somebody,” Smith said. “The more you use it, the safer it is for the suspect and the officer. No other tool can say that.”