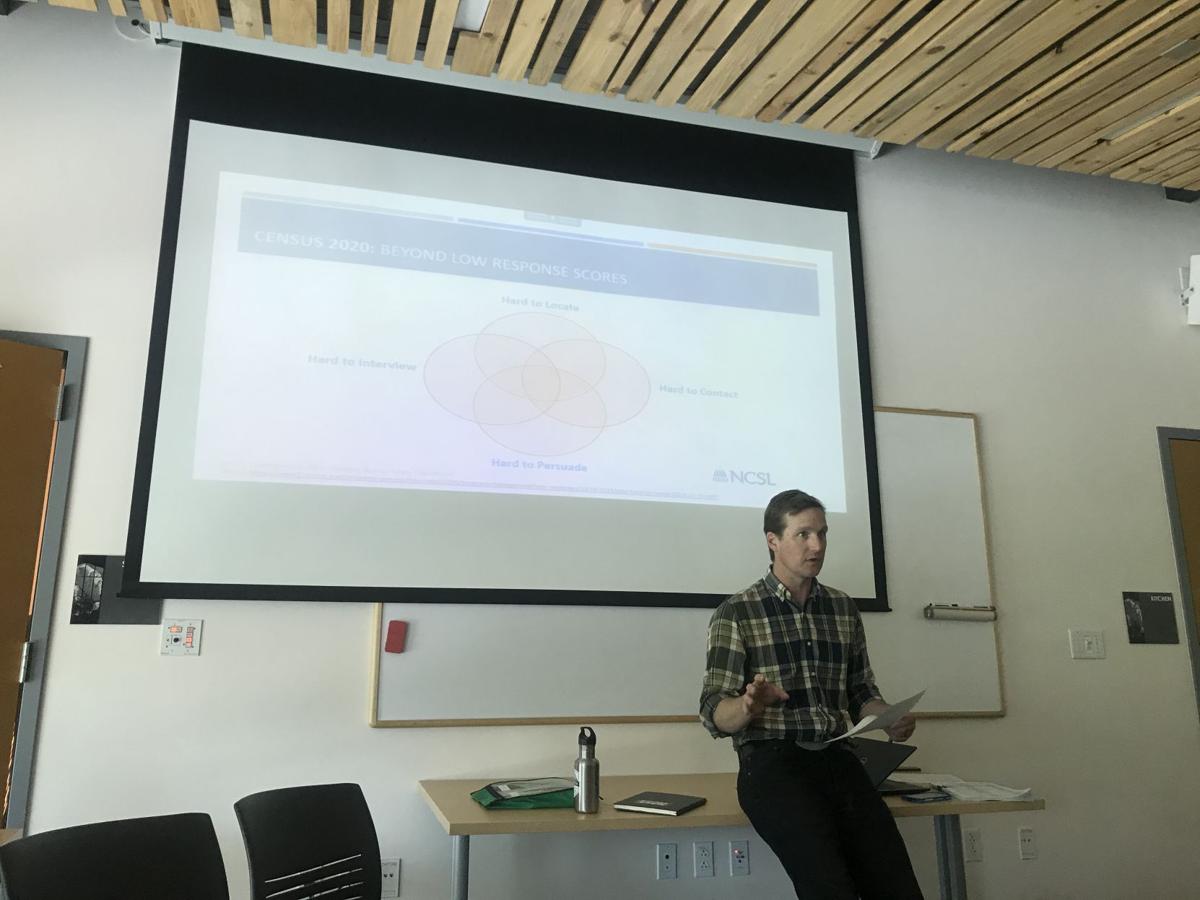 Phillip Supino, principal long range planner for the city of Aspen, shown here at Wednesday’s complete count meeting, is leading the charge to make sure all residents of the Roaring Fork Valley return their census forms next April.

The Aspen to Parachute Complete Count Committee is part of a statewide effort to avoid an undercount in the 2020 U.S. Census.

The Aspen to Parachute Complete Count Committee met for the first time Wednesday to learn more about the 2020 census and create a strategy to accurately count residents of the Roaring Fork Valley, New Castle and Parachute.

Brian Meinhart, a U.S. Census employee based in Grand Junction, presented a timeline of events and information about the 2020 census to leaders in the government and nonprofit sectors from Pitkin, Eagle and Garfield counties at the Carbondale Public Library.

As soon as next month, residents may start getting knocks on their door as census workers carry out the first stages of randomly verifying area addresses. Meinhart said they are also currently focusing on recruiting workers for the heavier lifting come spring when census mailings hit mailboxes and door-to-door check ups begin.

The local complete count committee is led by Phillip Supino, principal long range planner for the city of Aspen. He told the group that it will take the partnership of everybody in the room to reach all of the hard-to-count communities and achieve an accurate data set for who is living in the valley.

“If there is one thing I can stress right off the top it’s that the next nine months are going to be a process of what I hope is a successful support and outreach campaign for the census bureau,” Supino said.

Nan Sundeen, director of human services for PItkin County, said that an undercount could lead to an underfunded government. She said that services provided by her office, such as food assistance, are funded using per capita population calculations.

“All of our allocations are dependent on the numbers counted,” Sundeen said.

Former Aspen Mayor Mick Ireland has made a mapping tool based on the previous census data set to identify areas that may be undercounted.

“You lose about 4,000 dollars for every unaccounted person,” Ireland said.

Others who work directly with minority communities expressed concern that the current political climate has threatened participation in the demographics they serve.

“My community is one of the undercounted,” said Alex Sanchez, executive director of Valley Settlement, a nonprofit that supports the immigrant community in the Roaring Fork Valley.

Sanchez said that the Trump Administration has created a legitimate fear in communities of color that information will be used in discriminatory ways.

Meinhart stressed that it is against the law for the Census Bureau to share any information with any other branch of the government such as the IRS or Immigrations and Customs Enforcement.

Census workers will not be wearing a uniform as they go door to door to follow up with households that do not turn in their questionnaires, but they will have badges so the public can verify they are trained, official workers. The bureau will be sharing what those badges look like with local law enforcement so they can spot fake IDs.

The majority of households in the local area will not get a paper census form to fill out but instead a postcard encouraging them to go online to submit their forms. Local public libraries will partner to make sure those who do not have access to the internet can use their computers to participate. The form is also accessible via smartphone.

If households do not submit the forms online, four follow up reminders will be sent and eventually a paper form is also sent. On May 9, census workers will start knocking on doors of those who have not filled out their form. Meinhart said if members of the public do not want people coming to their home, the best thing they can do is turn in their census form before the May deadline.

Meinhart said it was important for the diverse representation in the room to be a part of determining the best way to reach the area’s hard-to-count population. He said communities can be hard to count for several reasons, including homes that are hard to access.

Jim Wahlstrom, senior planner for the town of Snowmass Village, said that in the 2010 census the town was undercounted. He said the accessory dwelling units popular on the property of second homeowners were not well represented. And the seasonal nature of the town means many residents aren’t around on Census Day, which is April 1.

“As you know for a ski resort community, a lot of employees leave in April and the census is starting in April,” said Wahlstrom.

Meinhart said the definition of a resident is six months plus a day in the home that is sent the questionnaire, but that workers will also make efforts to connect with transient communities such as homeless people, those that travel between RV parks such as retirees and van-lifers, and college students.

Supino will continue to convene stakeholders to craft a single message throughout the valley encouraging participation and stressing the importance of getting all residents counted. The information is due to the president by the end of 2020 and state and federal election districts will be drawn based on those numbers beginning in 2021.

Meinhart said because the numbers effect everything from the state’s representation in Congress to its allocation of federal dollars, his team is laser focused on getting 100 percent participation.

“Our goal at the bureau is to count everybody, once and only once, and in the right place,” Meinhart said.