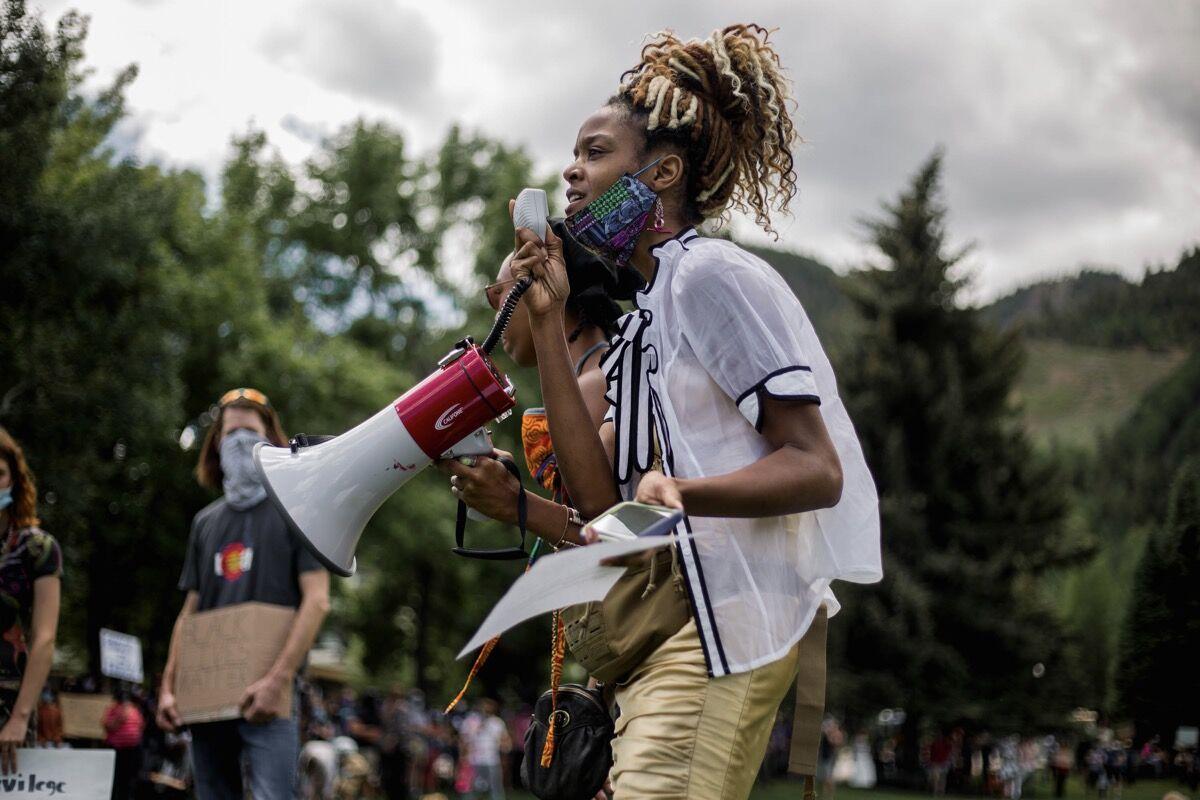 Sájari Simmons pictured with her 6-year-old daughter, Sâthja. Simmons has created a virtual anti-racism course as one way to sustain the momentum of the Black Lives Matter marches held in Aspen during the summer.

Sájari Simmons pictured with her 6-year-old daughter, Sâthja. Simmons has created a virtual anti-racism course as one way to sustain the momentum of the Black Lives Matter marches held in Aspen during the summer.

As Aspenites took to the streets this summer to join Black Lives Matter protests throughout the country, Sájari Simmons rose as one of the de facto leaders of the local movement. She has since spearheaded the group Roaring Fork Show Up, an organization built to support the local minority community.

Through her leadership, she was often asked the same questions from those who were interested in being an advocate to the Black community, or wanting to work for social justice beyond showing up for marches.

She then spent months organizing a course that would help provide history and education regarding the Black experience, as well as provide ongoing work individuals and organizations can do to include the Black community.

“All of this has been so organic. I built the training for individuals based off of all of the questions and indirect counsel that I was giving since June,” she said.

The 10-week course begins Dec. 28. Special VIP packages and pricing end Monday. The lessons are online and include social media elements for students to interact with each other and with Simmons.

Simmons has designed the course to cover difficult topics such as white fragility, empathy, workplace diversification and speaking to children about racism. She also wanted to make sure there were anti-rasict projects that participants could take with them and implement in their own circles.

“It’s so new of a thing that I can see people processing how they want to take part in it, or how they feel like they could actually gain or move the needle forward,” she said. “Once people actually go through the course, they will feel really good about ‘wow I actually produced a tangible action.’”

Even in a liberal community such as the Roaring Fork Valley, systems are in place that favor those who have always been in power. Simmons said she has experienced resistance to some of her teachings from people who already think they have mastered all there is to know about social justice and racism, without actually having consulted Black friends or neighbors about their lived experience.

“There are so many oversights that happen in those conversations where everyone is really just a sounding board,” she said. “People need to understand that there is a very important education piece and this is not something that we can just be intellectual about.”

Simmons said she has seen a resistance from those who don’t want to want to look inward or learn more than they already have, because they are uncomfortable admitting that they still have work to do.

“It’s almost like working out, but you still eat 12 donuts a day,” she said.

She also welcomes those who have not spent time thinking about racial justice or their place in the systemic power structures. She said Black history and the Black experience is not taught to children growing up, so there is unintended ignorance around issues of race in America.

“Sometimes those are the people that make the largest leap in action. Because when you are so far behind you realize the difference a little easier than someone who has been consciously trying to be an advocate for social justice,” Simmons said.

She sees education as a way of sustaining the BLM movement that seems to be a recurring fad that fades out of the public eye without much change on the local or national level.

“As the leader of a BLM association and ­organizer of local protests, I witnessed an inherent issue with the way our country has failed to offer real solutions to racism dating back to the Civil Rights Movement,” Simmons writes on the course registration page.

“This failure has left people of color and allies alike, feeling hopeless and confused when it comes to paving a better future. The issue is this: We protest in the streets, sign a few laws, and then… the energy fizzles. Our efforts lack sustainability. Without large rallies, people lose their sense of personal accountability. Without media coverage, people begin to think racism no longer exists.”

Simmons wanted to create something that would allow people to grow past the 10 course modules. Each week comes with a workbook that individuals can fill out for where they are in their current anti-racism journey, and as they evolve.

“That’s one of the really powerful things, because the workbooks are timeless. You can go through it again and again depending on where you are.”

Simmons is also in talks with area organizations for their leadership and employees to undertake the course. She said in her time in the valley she has seen a number of Black people move away to live in a community where they feel more welcomed.

“I think this is going to be most important for organizations that employ people. Because right now there is no real benefit for the Black ­community to even work in the Roaring Fork Valley,” she said. “It comes with so many struggles that it is not worth it, even if it comes with double the pay.”

But she does see a genuine interest in allies in the community who want guidance for ways to continue the momentum that the marches sparked this summer.

And with the large influence that the valley has beyond its borders, she hopes that establishing an anti-racist community locally will serve as an example for other communities to follow in the fight for equality.

“I think that once a good enough amount of people are going through this program in the Roaring Fork Valley, it will be automatic that the rest of the world is starting to see impact,” she said.

Simmons said even projects like the  little libraries that were placed around Aspen this fall are important steps forward to being a more inclusive community, as long as they are sustained.

“I’d like to see opportunities set in stone that will impact my children, that will impact the next Black family,” Simmons said. “I am wanting to see sustainability even if that looks small.”