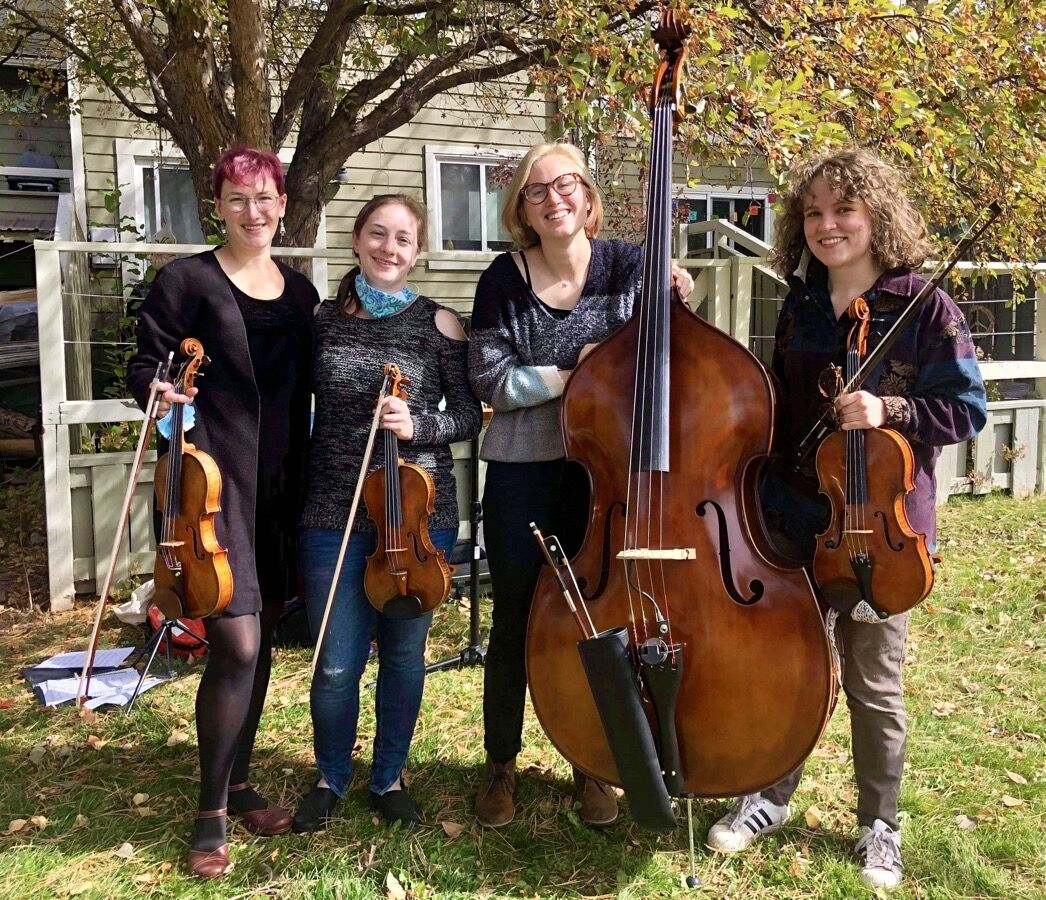 In addition to their teaching fellow duties, this year’s string players decided to start their own musical group, Sopris Quartet. Julia Foran plays the viola, Emily Acri and Delaney Meyers play the violin, and Jeanette Adams is on the double bass. 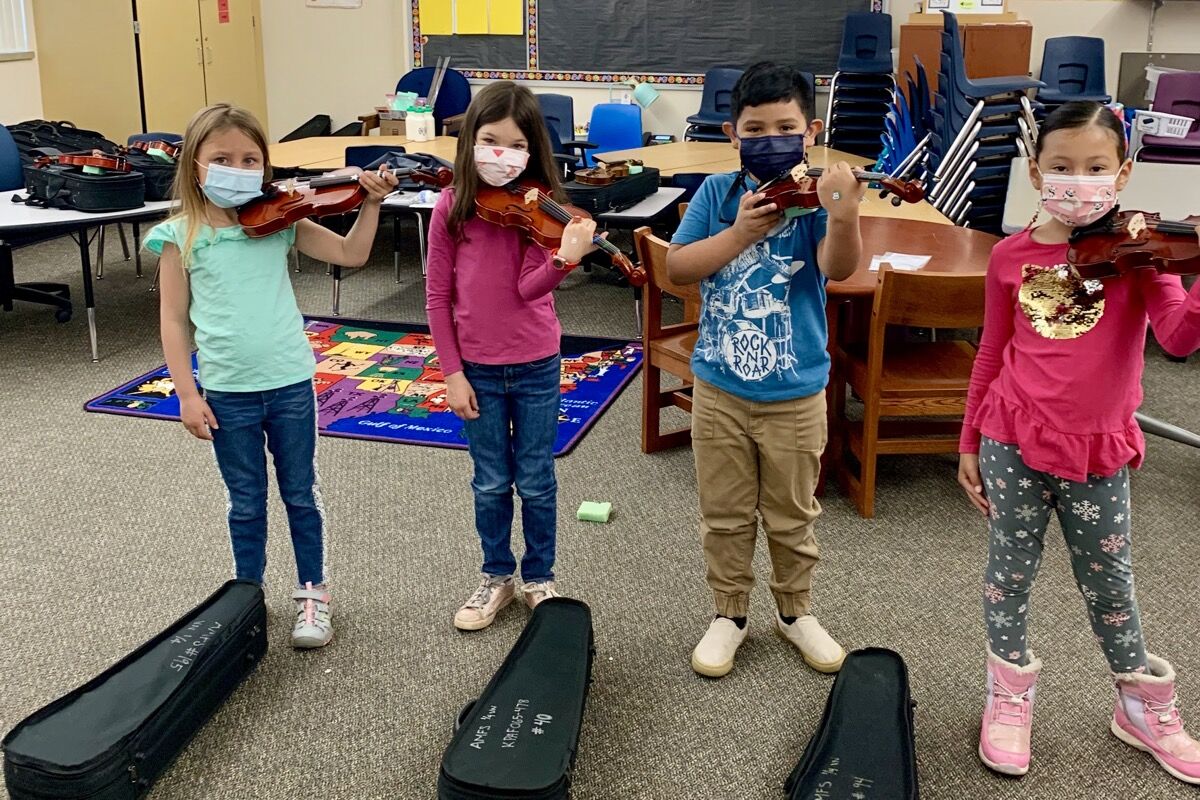 In addition to their teaching fellow duties, this year’s string players decided to start their own musical group, Sopris Quartet. Julia Foran plays the viola, Emily Acri and Delaney Meyers play the violin, and Jeanette Adams is on the double bass.

Every year, Aspen Music Festival and School partners with the AmeriCorps program “ArtistYear” to bring a handful of recent higher-education graduates from across the country to the Roaring Fork Valley. The Aspen area is one of only four locations — with Philadelphia, Queens and the Carolina Sandhills — that is part of the national program.

The artist fellows who are assigned to the valley spend the year teaching music and visual arts to students in the Roaring Fork School District.

“I think that everybody is capable of creating music,” said local string player Julia Foran, who is one of this year’s fellows. Foran, who grew up in the valley, has been teaching general music classes at Carbondale Middle School as well as string classes for students at Basalt Elementary School.

“So each of us has been paired with a partner teacher in a school somewhere in the valley,” she said. “Most of us are working with music teachers, but some of us are paired with a visual arts class or a first-grade teacher or an early language development teacher.”

The idea behind ArtistYear is to reduce inequity in arts education by making music and art classes more inclusive and accessible to all students. To this end, artist fellows work in schools that receive Title I funding to assist in meeting student’s educational goals. Title I is a federal aid program for schools that have a high percentage of children from ­low-­income families.

“We’re not exactly trying to make professional musicians or future symphony players or anything like that,” she said. “It’s more about helping kids learn how to connect to music.”

And with the pandemic, Foran says, the work they’ve been doing with the schools feels even more crucial than before.

“The most important thing this year is just the kids’ social and emotional health. And art is such an amazing tool for that sort of thing,” she said. “We’re just trying to connect with kids, make them feel important, help them express themselves. And it’s really fun.”

While pivoting to virtual music classes came with its own set of challenges, including the lack of reliable internet access, the move also had an unexpected silver lining.

“I really think that going online has helped us to limit that gap and reach more kids than ever before,” Foran said. “There’s not really a barrier of space or transportation. I can just sort of bring the music ­directly to them.”

“I don’t think they’ve ever turned away a student because of the cost prohibiting them from taking a class,” Foran said. “So whether that’s tuition or buying an instrument, we make sure that everybody can play.”

Foran says the program is one of an increasing number of student-focused music and arts initiatives popping up in the Valley.

“I can say from growing up here, just the difference in 10 years that I’ve seen with the amount of arts programming and music exposure that kids are getting,” she said. “I think it’s making a huge difference.”

As the school year comes to a close, Foran says she and the other artist fellows are grateful for the connections they made in the Roaring Fork Valley, including with each other. In addition to their regular teaching duties, this year’s string players decided to get together and start their own musical group called the Sopris Quartet.

“There are six of us fellows here doing work in the schools and arts classrooms, and four of us happened to be string players,” Foran said. “We were the perfect instrumentation for a string quartet, so we just started playing together and had a lot of fun.”

In the all-women group, Foran plays the viola, Emily Acri and Delaney Meyers play the violin and Jeanette Adams is on the double bass.

“We play everything from jazz and folk music to Haydn quartets, basically whatever we feel like playing,” Foran said.

While they haven’t been able to hold any in-person concerts yet, the Sopris Quartet recently performed on Grassroots TV as part of the Basalt Library’s “Music From the Library” — a virtual program created to keep music alive during the pandemic.

“We played all music by black composers,” Foran said of the performance in early February. “That was a really great opportunity for us to learn some new music and release a concert for the community.”

More recently, the quartet appeared on “Music From the Library: Spring for Sopris Strings,” which aired on GrassRoots TV Thursday evening (it’s now available on the Basalt Library website). The performance opened with a group of folk songs from Norway, Sweden and Denmark, followed by several Italian and American songs. The well-known bolero from Mexico, ‘Besame Mucho,’ closed the concert.

“Their performance as a group represents true ensemble,” said the library’s music program coordinator, Charlotte McLain. “They sound so seasoned for a quartet that has existed only an academic year.”

Last week, the Sopris Quartet went for back-to-back performances — the next day, on Friday, the foursome played at Steve’s Guitars in Carbondale. The live broadcast was available on Grassroots TV and is archived on the nonprofit’s website, grassrootstv.org.