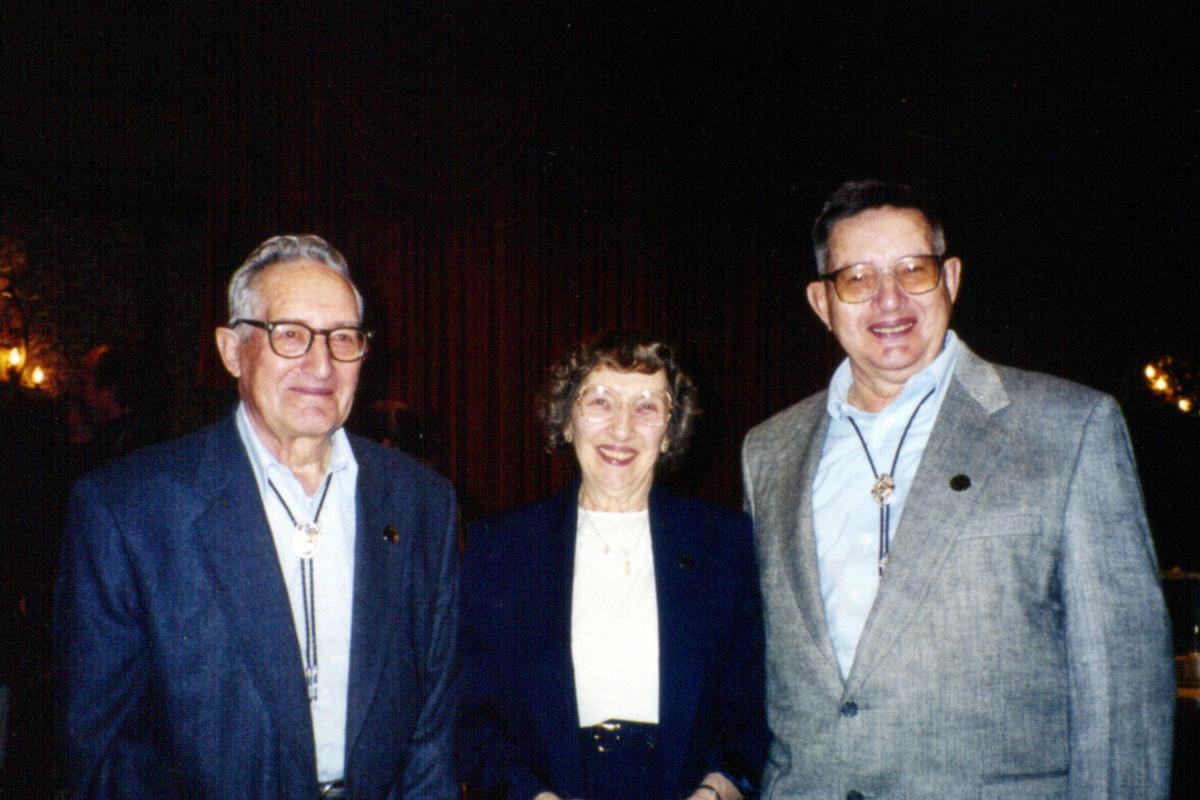 Frank Dolinsek, Josephine Dolinsek and John Dolinsek at the Aspen Hall of Fame Banquet, 1998, when John and Frank Dolinsek were inducted. Josephine, the last surviving of the siblings pictured, passed away earlier this month. 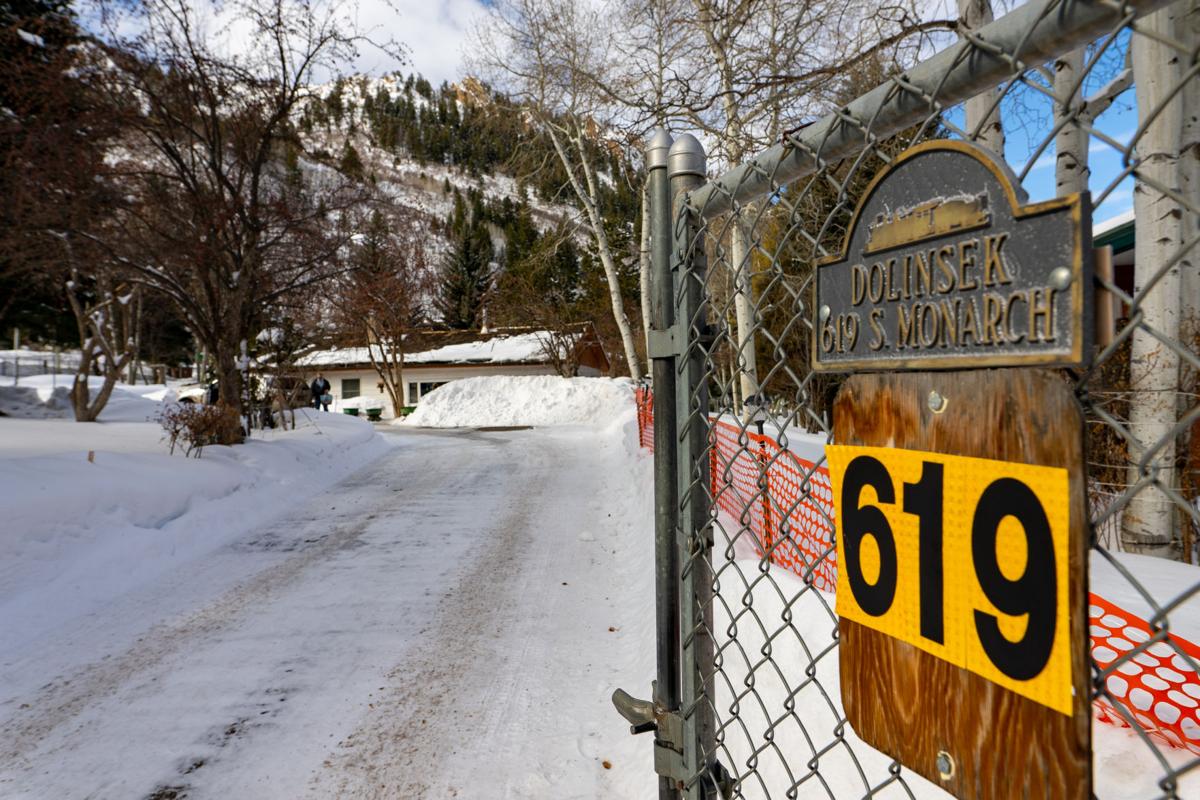 A look inside the fence at the Dolinsek residence at 619 S. Monarch St., which has been dedicated to the city for the creation of a new public park. 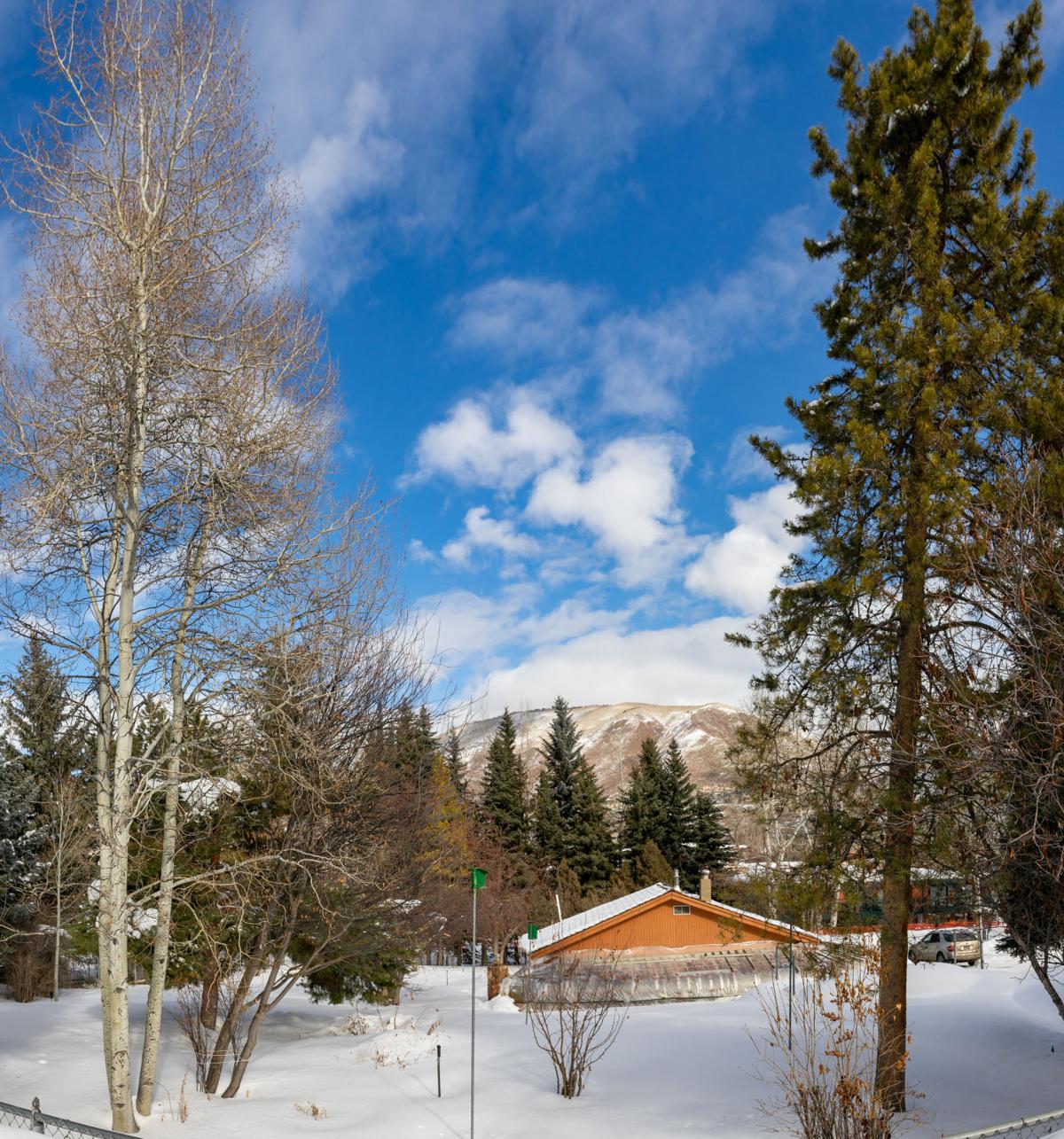 The Dolinsek property near the base of Aspen Mountain will anchor 1.5 acres of city-owned parkland when it is converted into the Dolinsek Gardens park. 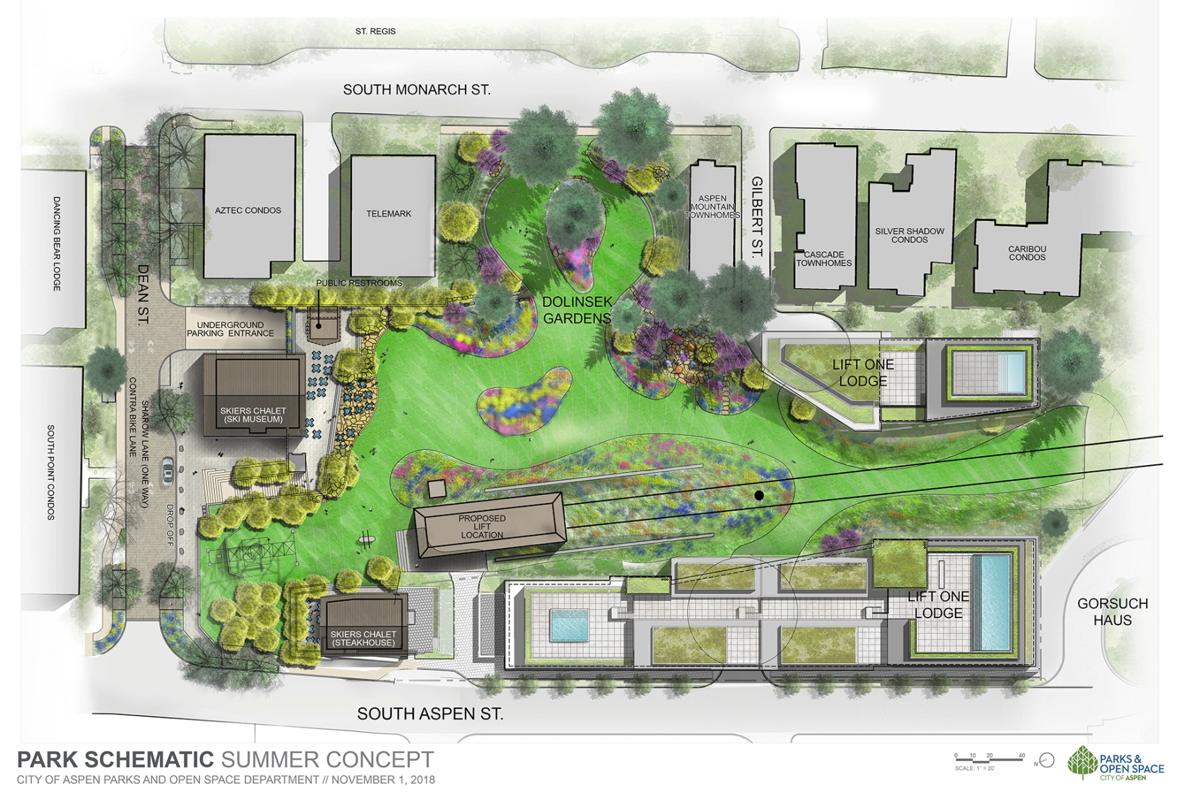 A schematic for the Dolinsek Gardens that will be adjacent to new development that is part of Lift One corridor redevelopment plans.

Josephine Dolinsek, who dedicated her family’s property at the base of Aspen Mountain to the city so that it may become a public park, passed away on Jan. 18. She was 98.

Dolinsek was honored in her obituary as “the matriarch of her large family and revered by all. All who knew her, knew her as caring, compassionate, fun, and the one to go to for that fact or name on the tip of your tongue.” She was one of five siblings born to Frank and Nellie Dolinsek and she graduated high school here in 1941. Her brothers Frank and John are in the Aspen Hall of Fame, owing to their long history in the community and their work to clear the first runs on Aspen Mountain and build the first chairlift, which ran near the family’s property at 619 S. Monarch St.

That land, consisting of a single-family home and attached greenhouse with a large yard including mature trees and extensive gardens, is something of an anomaly in Aspen’s heavily developed mountainside lodging zone. The family’s long-term wishes were for it to be eventually dedicated as a park for the use and enjoyment of the residents and visitors of Aspen. In 2014, after more than a decade of discussions with the Dolinsek siblings and their attorney, Richard Knezevich of Aspen, the city bought the .63-acre parcel for $2.5 million, which was a significant discount from what it could have sold for to a private developer. At the time, the county assessor valued the land at $5.18 million.

“It’s a great gift by the family to the city of Aspen,” Knezevich said at the time. “… It’s the most pure-of-heart transaction I’ve ever been involved with.”

The land transfer came with a conservation easement held by Aspen Valley Land Trust stipulating that the property could only be developed as a public park and that it could have no commercial application. That includes ski-lift towers or overhead cables, but the agreement allows that the land could be skied across in the winter.

The agreement also granted Josephine and Frank, who passed away in 2016, the right to live out their days on the land before the city took possession.

The family insisted upon the no-chairlift clause because of a desire for the property to be used as an open park providing a break from the hustle and bustle of the surrounding area. It connects with Lift One and Willoughby Parks, creating what will become 1.5 acres of uninterrupted parkland coming down from the slopes of Aspen Mountain.

“When considered in the light of the future developments in this area this parcel will become an important natural haven in an otherwise busy and heavily developed part of the city,” says a memo that Austin Weiss, now the city’s director of parks and open space, wrote when the property went under contract in 2014.

When the private developers behind two hotel proposals in the neighborhood crafted a site plan that would allow a new Lift 1A to reach Dean Street, passing close to the Dolinsek site, the family agreed to allow their land to be used for snow storage as a part of future snowmaking operations. That agreement gave Aspen Skiing Co. the comfort it needed that it would be able to maintain return skiing to the new chairlift, overcoming a crucial hurdle for the Lift One corridor plan, approved by voters in March 2019.

With Josephine’s passing, the city may take formal possession of the property and begin the work of converting it into a park. But Weiss said on Thursday that the city’s first priority is to give the family as much time as they need to wrap up their use of the home.

Jeff Woods, the parks and open space manager who has had a hand in parks development projects in the city for 23 years, has been taking a leading role on the project known as the Dolinsek Gardens, meeting with Josephine over the last 18 months. Weiss described that as a “rare opportunity for us to work with Josephine to engage her in the design of the park space that is going to honor herself and family.”

Weiss said that while concepts are still in their early phase, Dolinsek Gardens will be a “contemplative space” free from programming such as picnic shelters or playgrounds.

Woods said on Thursday that the city’s intent is to build on the aesthetic that the Dolinsek family has maintained on the land for a century.

“They were proud of the landscaping they had done over the years,” Woods said, describing the family as gardeners and as private people.

He said the city would “work around the existing trees and flower beds to enhance what they did and allow the public to see what a legacy family could do with the land.”

“I think we can create something that is magical,” he said, that will honor the Dolinseks forever. The parkland also will speak to the history of Aspen since it will anchor an open space corridor that includes the remnants of the original Lift One, which opened in 1946 when it was the world’s longest chairlift.

Woods said he first became familiar with the Dolinseks in the late 1990s, near the beginning of his career with the city. Even at that stage, they knew they wanted the land to be preserved as open space after they were gone, he said.

“Most people would say we are sitting on a gold mine. They never looked at it that way,” he said.

It was a long-term commitment to earn their trust, Woods said, and he was helped in that when the Dolinseks learned he had worked with Annie Denver to create the John Denver Sanctuary and Wetlands near Rio Grande Park to honor the locally based musician who passed away in 1997.

The family was concerned about the impact that nearby hotel proposals would have on the character of the neighborhood. Woods said he told them that they could not stop the hotels, but “what I could promise is that we would never come onto land with bulldozers.”

The family exemplified the values of Aspen before it became a ski mecca, Woods said.

“They were old school, not modern Aspen at all,” he said. Regarding Josephine, “There was a calmness about her.”

According to her obituary, Josephine received her nursing degree from Mercy Hospital in 1946, and RN in 1948, after which she worked at the VA hospital until 1951, when she was commissioned as an officer in the U.S. Air Force. As a military nurse she lived in Iran, Spain, the Philippines, India, Hawaii, Japan, Portugal and Germany. She earned the rank of major and retired as a surgical nurse after 20 years in the U.S. Air Force with many awarded commendation medals. Later she retired from nursing and returned to Aspen in 1989 to help her brothers Frank and John take care of their mother Nellie. A memorial mass will be held today at 10:30 a.m. at St. Mary Catholic Church, where she was a lifelong member.

The land where she lived will eventually play host to skiers in the winter and picnickers in the summer. Woods said it will be largely free of pavement, with a ribbon of bluegrass running through. Native perennials and aspen and spruce trees will be included in the landscaping.

The city has the unique opportunity to design a park that will functionally be part of a ski run in the winter. Woods said that while that is a radical concept in the United States — where ski areas tend to feel industrialized — many European resorts provide a framework for how a ski area can become a park as it winds into town.

“Aspen is unique,” he said, since the town and ski area are so intertwined. The Dolinsek Gardens could become a “new model for what a ski area can do in a community. …We have an opportunity to do something that maybe has never been done in the U.S.”