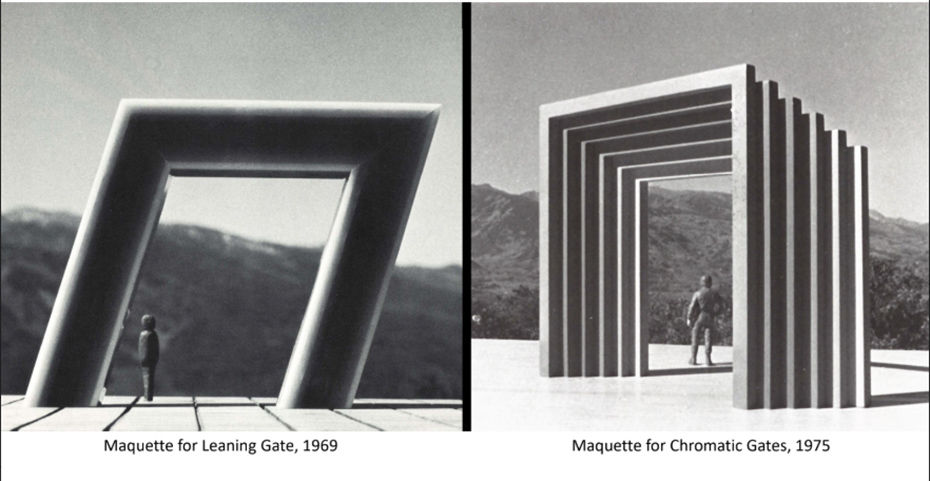 In his final decade, Herbert Bayer began designing “gates” as ways to connect public and private spaces. Sketches of his, placed among the mountains of Aspen, will be brought to life as the entrance to the new Resnick Center for Herbert Bayer Studies at the Aspen Institute. 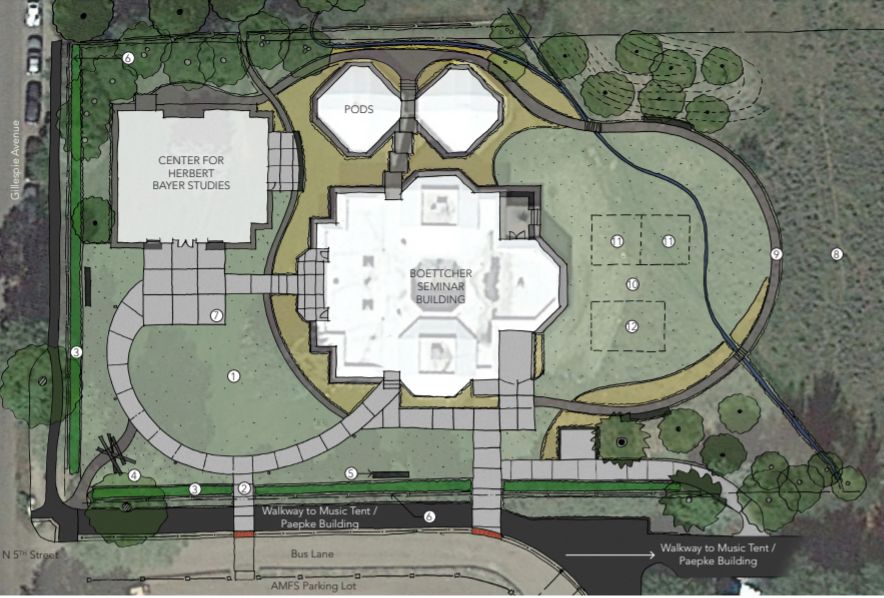 The pathway from the Boetcher building to the Resnick Center for Herbert Bayer Studies at the Aspen Institute will follow the fibonacci sequence spiral, an homage to Bayer’s fascination with the pattern that is found throughout nature. 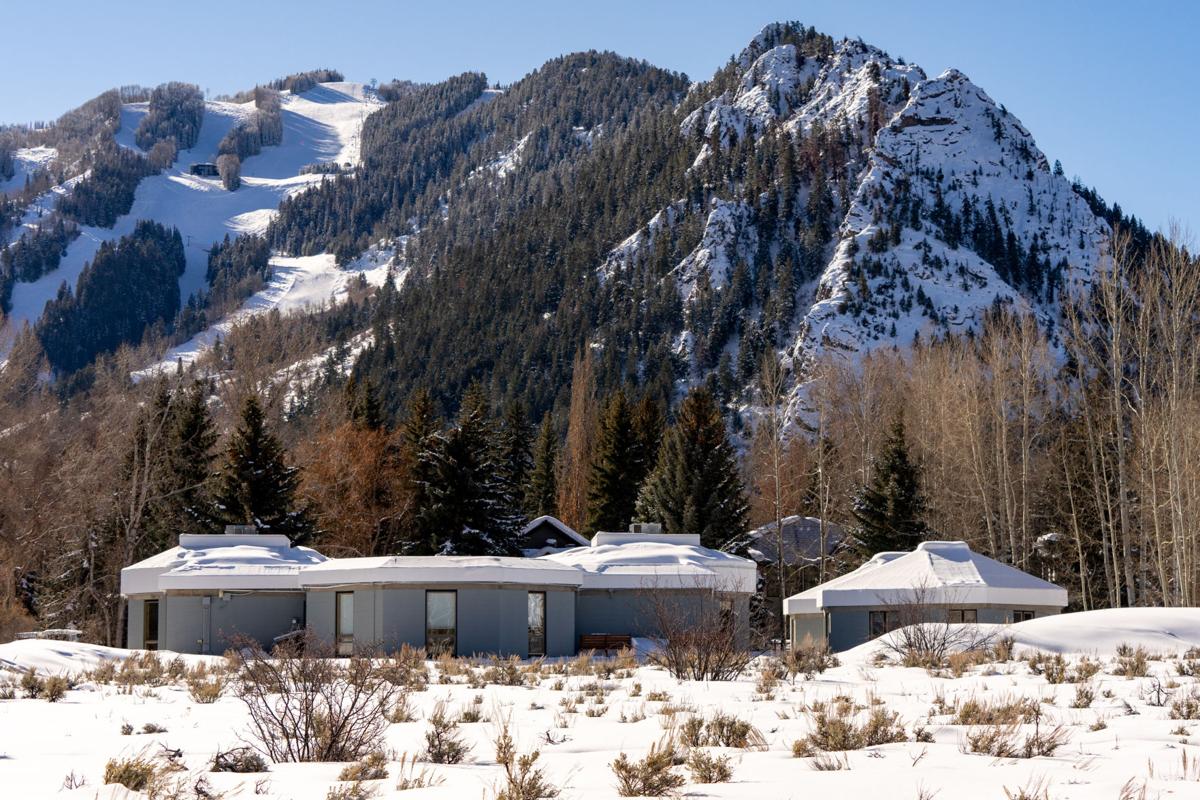 The Aspen Institute’s Boettcher building was the last contribution to the Aspen Institute Campus designed by Herbert Bayer. A new center, built adjacent to the offices, will honor the life and work of the Bauhaus artist.

On Tuesday, the Aspen City Council approved the construction of The Resnick Center for Herbert Bayer Studies at the Aspen Institute. The new facility will showcase the works of Bayer, who designed the institute’s campus, and was influential in spreading the Bauhaus art movement to America.

The center, designed by local architect Jeffrey Berkus, will be built on the south side of  campus, adjacent to the Boettcher building, which is the last element Bayer created for the institute, in partnership with Fritz Benedict, another grandfather of the Aspen Idea. Berkus also designed the Doerr-Hosier Center and the Madeleine K. Albright Pavilion on the Aspen Meadows campus.

The project was instigated by a $10 million donation from local philanthropists Lynda and Stewart Resnick, co-owners of The Wonderful Company, shortly after the culmination of the Institute’s celebration of the 100-year anniversary of the Bauhaus school.

The center will be free and open to the public, and programmed with educational opportunities for school children and visitors to learn more about Bayer’s life, art, and impact on Aspen. On Tuesday, President and CEO of the Aspen Institute Dan Porterfield told city council that the location and purpose of the new building will connect the think tank to the local community

“This reimagined corner of the Aspen Meadows Campus will become a new bridge connecting the Aspen Institute and the city of Aspen,” Porterfield said. “In fact, I see this project as a once-in-a-generation opportunity to create an inspiring permanent resource that preserves and showcases the aesthetic heritage of the institute and the greater Aspen community.”

There will be a permanent collection of 13 pieces donated to the institute by Britt Bayer upon her death in 2018, as well as additional holdings acquired over time and rotating exhibits of pieces on loan. Britt Bayer, the wife of Bayer’s stepson Javan, donated pieces that span Bayer’s six-decade art career.

“A lot of other family members or collectors have expressed interest in doing the same because of this project,” Porterfield said.

“The campus itself is actually a total work of art,” Porterfield said.

Bayer created paintings and tapestries specific to the campus, and used his design background to create posters that marketed and branded Aspen during the time that the resort was growing into its own. There are also private homes throughout Aspen designed by the architect.

“It really is that legacy of aesthetic brilliance that gives us the feeling that we have a responsibility to preserve and celebrate Bayer’s work in a facility that benefits both his genius, and then the enduring importance and relevance of it today,” Porterfield.

He told the council that no current facility on campus has the capabilities needed to house and preserve such history, such as a temperature-controlled archive and storage area.

There will be 11 galleries in the 7,465-square-foot center. Since the Resnicks’ gift, other institute trustees have joined in to help fund the project, and galleries will be named to reflect the donors.

The artifacts on display in the interior are not the only homage to Bayer, however. Art scholar Bernard Jazzar has spent the last 15 years studying Bayer’s works, reading his notes, and meeting with family. He told council that not only did Bayer influence Aspen, the town also had a lasting effect on him as well. The artist left in 1975 after the completion of the Boettcher building, when his health began to fail.

“What better way to honor him than to place the building right next to the one he left in ‘75. Reluctantly, I might add, based on his notes,” Jazzar said. “He so missed Aspen, the town he loved so much and felt home to him.”

Jazzar said it was around this time that Bayer became enraptured by the Fibonacci sequence, a mathematical pattern that can be found all over the natural environment.

“This was an occupation of his — how do you show the beauty of the universe through this beautiful equation?” Jazzar said.

The spiral shape that the Fibonacci sequence creates on a graph is reflected in the walkway between the Boettcher Building and the new Resnick Center for Herbert Bayer Studies, according to renderings presented at Tuesday’s meeting.

“The paths that he creates between the structures are very important,” Jazzar said. “He never separated his work as a designer from his work as an artist.”

A diagonal path leading from Gillespie Avenue to the buildings is an homage to Bayer’s connection between the Institute’s Paepcke Auditorium and the Koch Building seminar rooms.

To greet pedestrians using this pathway, there will be a  “gate,” designed by Bayer but never built before he passed away, in 1985 at age 85 in Montecito, California. His son Jonathan gave approval to the institute for that sketch to come to life as the entrance to the property. The brightly colored series of archways are rotated to also reflect the Fibonacci sequence.

While some neighbors expressed discontent with the chromatic sculpture, former Aspen Mayor John Bennett spoke in favor of the display during public comment this week.

“I just frankly think it would be fun to walk by,” he said.

John Sarpa, who lived in a Bayer-designed home, also spoke in favor of the project as a way to preserve the strong influence the artist has on creating the culture of Aspen.

“How lucky are we to have someone we can honor in a long-term way,” he said.

Sarpa, who has been behind the development of iconic Aspen hotels himself, said it has been 30 years since the institute has had a conversation about creating a new building, and there likely won't be another addition for a generation.

“This may be one of their last shining lights, building-wise” Sarpa said.

Painter Dick Carter, a former artist assistant of Bayer’s, told the Aspen Daily News that last year’s Bauhaus centennial was the first time many of the younger generation and newer residents got to find out about Bayer’s influence on the town.

He said the study center will help cement that legacy.

“He is such an important figure to art in general, but specifically because of his relationship to Aspen he is incredibly important. He has a huge influence on the way the town looks and certainly the way the institute grounds look,” Carter said. “People need to know more about his complete body of work, and the importance of his presence in the valley.”

Carter also spoke of Bayer as a valuable Aspen community member, and exemplar of the Aspen Idea.

“He was a perfect gentleman, and well-spoken, and well-mannered,” he said.

Carter supports the center as a way to respectfully curate Bayer’s many artistic mediums with an added appreciation for his life before, during and after Aspen.

“That’s going to be one of the great things about this study center. It will provide the public with a really comprehensive view of who he was as an artist, and as a community member,” he said.

As a 25-year-old budding artist in Aspen, Carter said when he first heard Bayer was in need of an assistant, his reaction was “who is Herbert Bayer?”

But, once the center is up and running in 2021. “Hopefully it’ll be a thing where no one will ever say ‘Who’s Herbert Bayer?”

This week: Pitkin County leads the state in issuing a stay-at-home order, the first reported death associated with COVID19 is reported. Mainstay summer events Food & Wine and the Ideas Festival are canceled, and area businesses grapple with the forced halt to daily operations. Members of the…