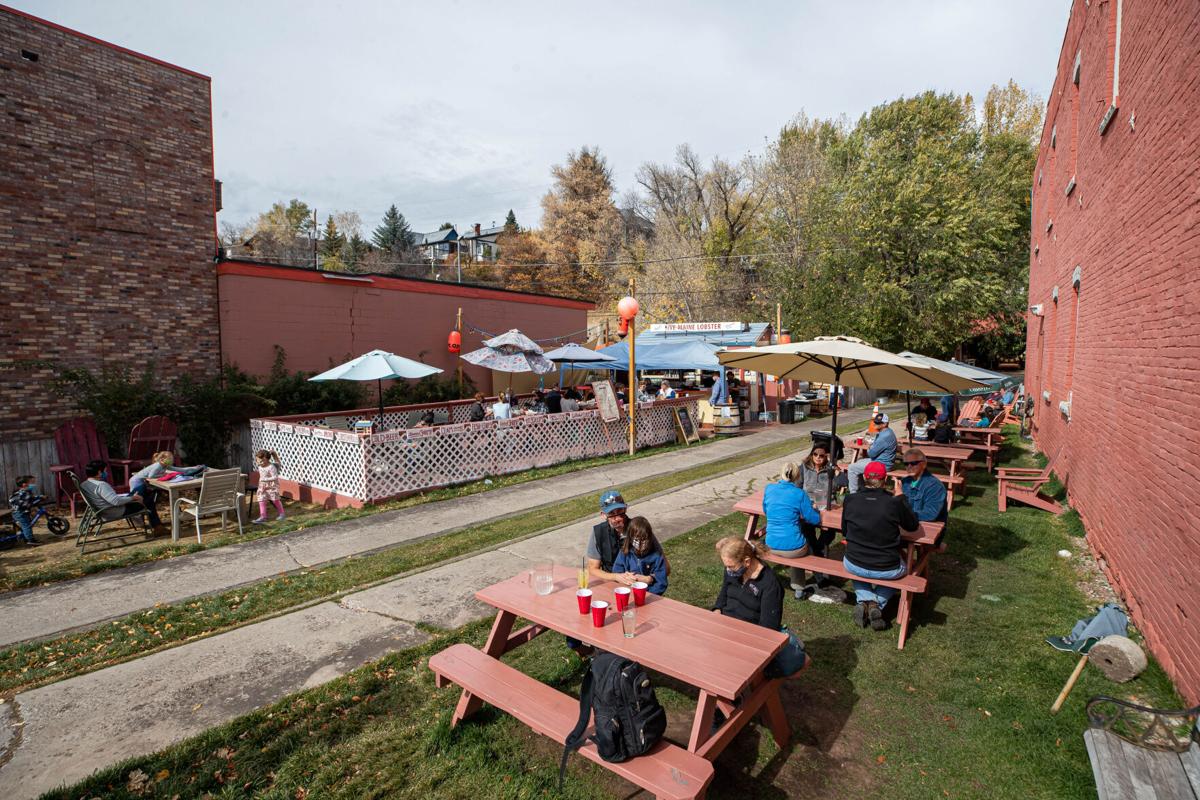 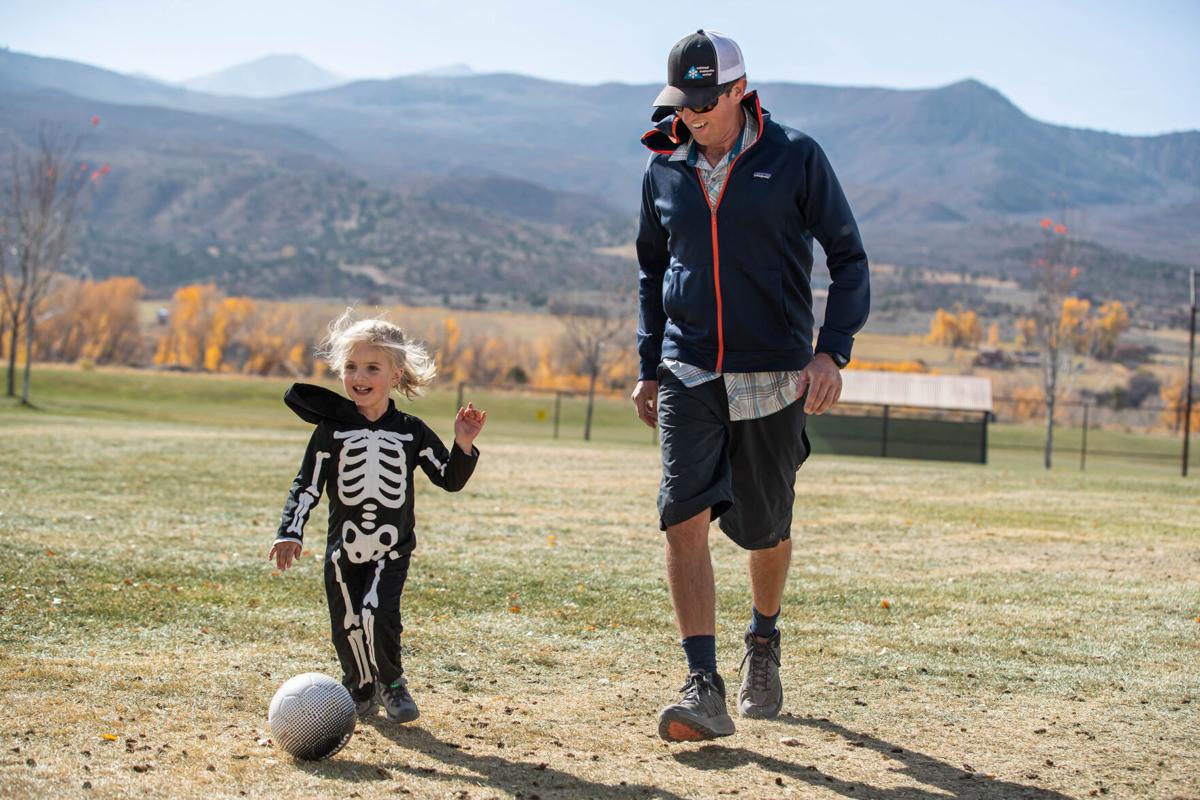 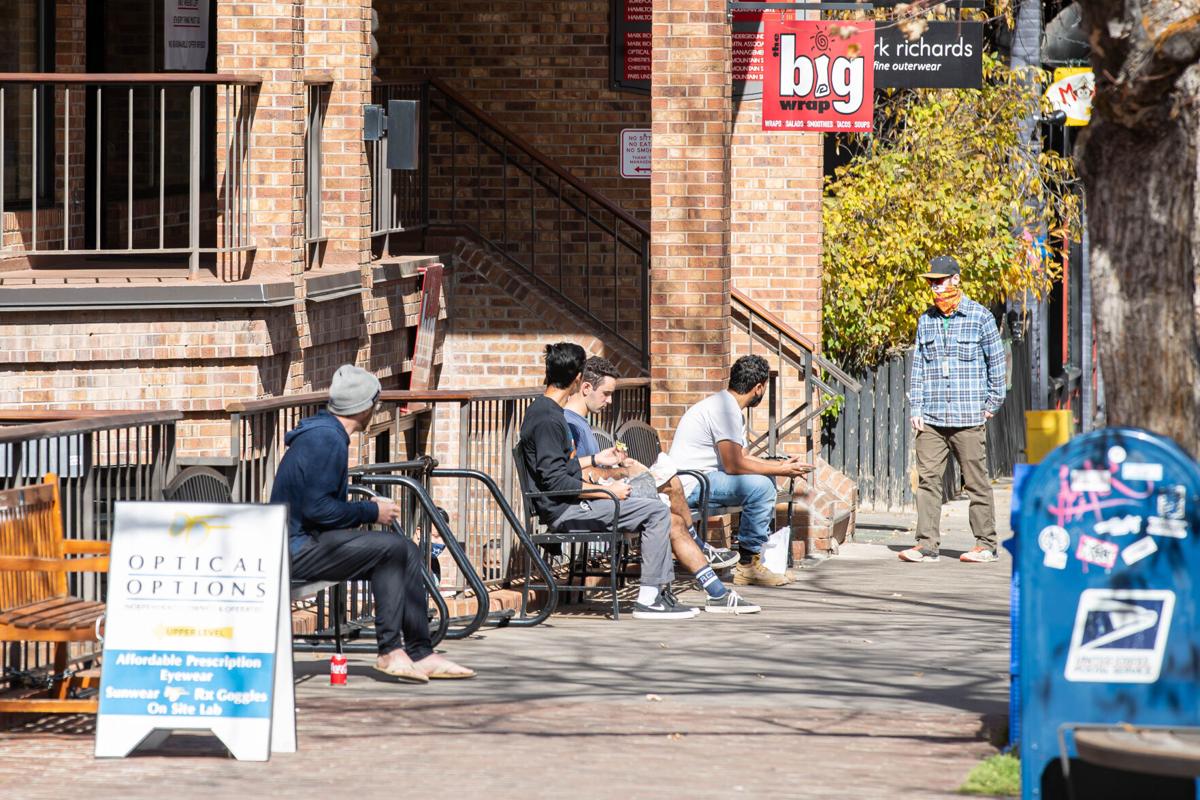 Young men eat their lunch outside of Big Wrap in Aspen on Tuesday afternoon. 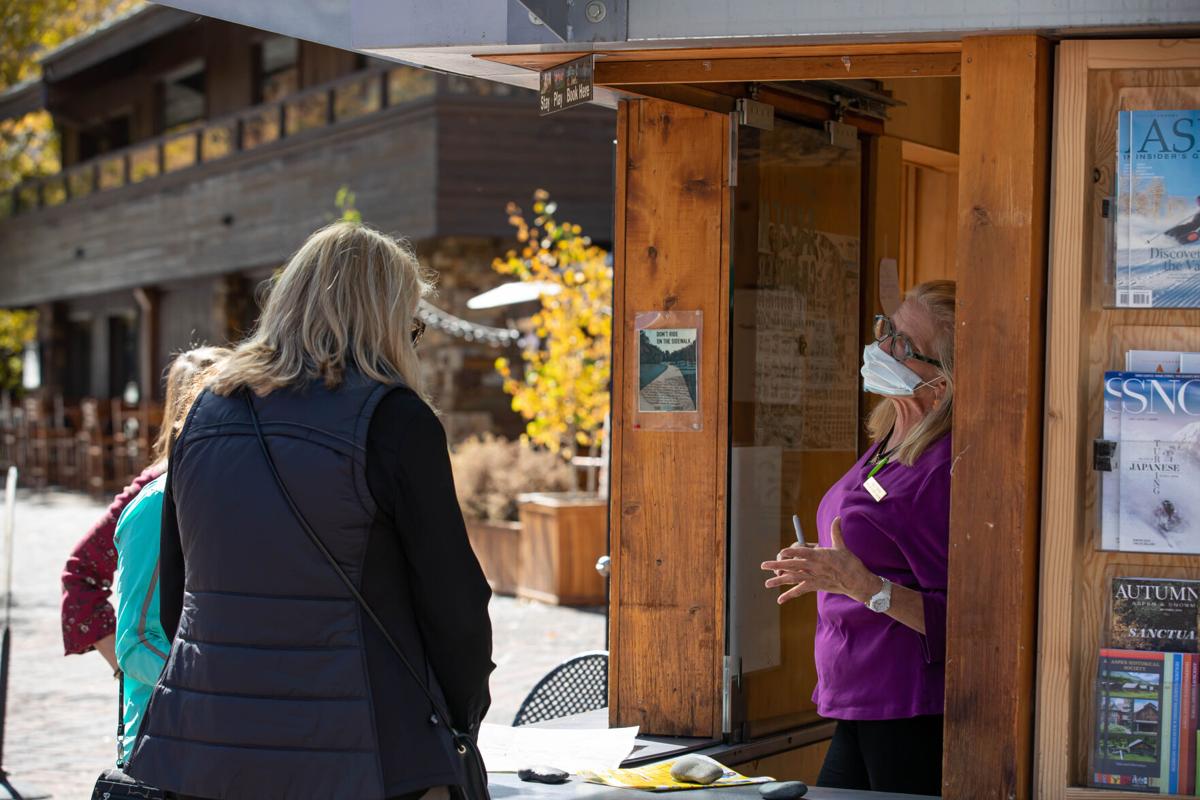 Women get advice from the ACRA member information booth on Oct. 20 in Aspen. 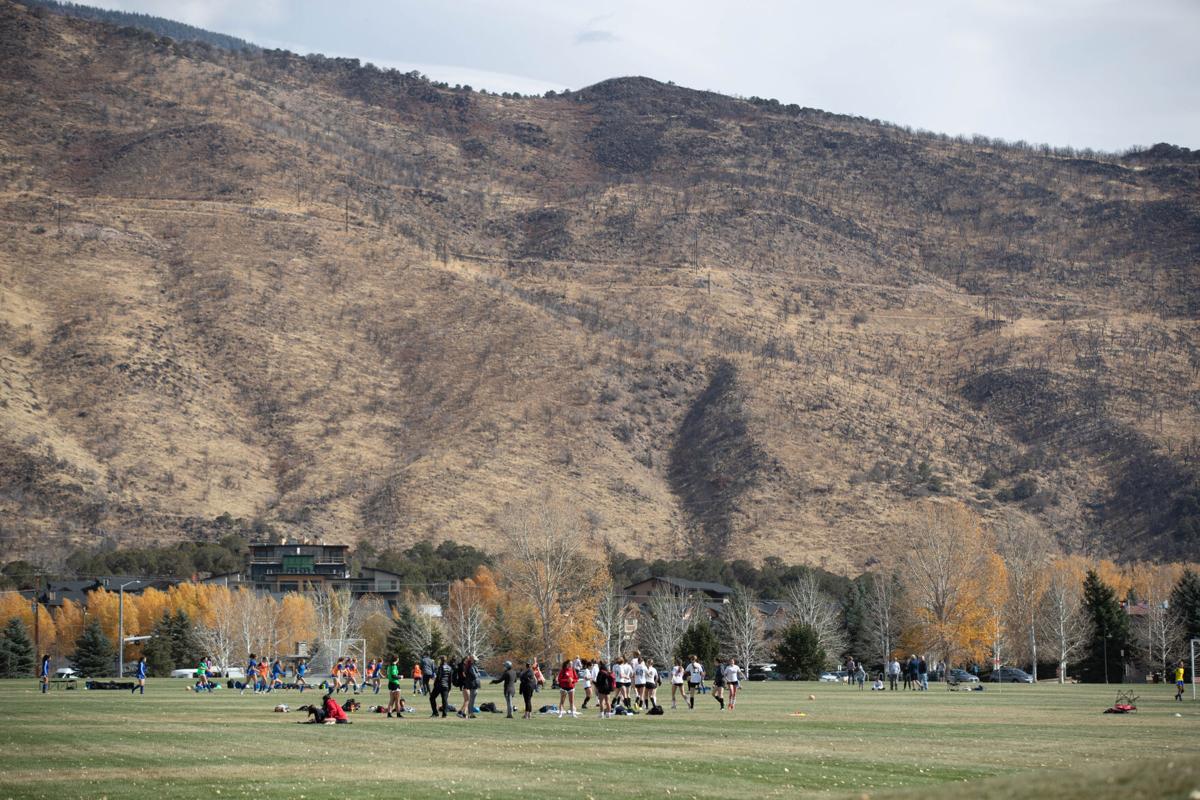 Young men eat their lunch outside of Big Wrap in Aspen on Tuesday afternoon.

On Oct. 15 the 2020 national decennial census came to a close, putting an abrupt cap on a year-and-a-half-long effort to count all residents of the Roaring Fork Valley. Through politics, a pandemic, natural disasters and an ever-changing end date, the 200 partners of the Aspen to Parachute Complete Count Committee maintained their efforts to accurately account for the entire local population.

In planning an outreach strategy in late 2019, Brenneman devised a long list of in-person events to educate the community on the importance of the census. On March 8, four days before the launch of the census, Gov. Jared Polis declared a state of emergency. The closing of ski resorts and stay-at-home orders followed.

“We had to change course with so many of our activities,” Brenneman said. “The census was the last thing on anybody’s mind during that whole period.”

A2PCCC is an organization made up of eight towns, three counties and an extensive network of nonprofits, local businesses, and individuals. Brenneman estimated that 80,000 people were represented through the network. The state rejected a proposal requesting funding for the local effort, leaving local jurisdictions to cobble together $140,000 for all outreach strategies.

“To me looking back on it, it really was an unprecedented regional effort ... it was just this great cross section of the community being represented,” she said.

The population counts reported during the census are then used to calculate the allocation of public funds for the next decade. The data also influences the district maps that determine public representation in the Colorado statehouse and in Congress.

“It was a very neutral project that highlighted the common good of our entire community. It supported everyone, no matter what walk of life you were from, what race, what ethnicity what socioeconomic class. The census supports everyone with the money that it brings to the community,” Brenneman said.

The Roaring Fork Valley has almost every traditionally underreported demographic residing throughout the area. Former Aspen Mayor Mick Ireland served as the data manager for the local effort. Ireland used voter registration data from his time in political campaigns and compared that information with the results of the 2010 census.

He noticed there were discrepancies when overlaying the data. Some neighborhoods showed significantly higher registered voters than the reported population count, indicating underreporting in 2010.

“I went to the city and said they are going to miss some neighborhoods unless we are really diligent here,” Ireland said.

Even before the piling disasters began in 2020, the team knew the Latinx population would be particularly difficult to reach due to early threats from the Trump administration that citizenship questions would be on the survey.

“Trump was promoting fear that they wouldn’t be counted, that they could be tracked,” Ireland said.

America does have a history of using the census to racially profile the population, including the roundup of Japanese Americans in internment camps in 1940. Congress has since passed laws creating severe penalties for disclosing census data, and all census staff take a lifetime oath to protect personal information.

“However people were still concerned and I can’t blame them. You can’t count on an administration that calls you rapists and thieves to protect your privacy in the census,” Ireland said.

The A2PCCC invested in Spanish-language printed materials to leave on doors during the in-person enumeration process and sent bilingual workers to make contact in neighborhoods with a high percentage of Hispanic households.

The committee also identified trusted members of the community to act as a liaison to their own communities to stress the importance of filling out the census.

“One of the keystones of the campaign was the trusted voices campaign,” Brenneman said. “It was utilizing the community leaders as the voice box of the census.”

Part of the work of the team that went door to door was to explain that the census is meant to count all residents, regardless of citizenship status.

Ireland said he knocked on a door at one point of a couple who said they had not filled out their forms because they are not American citizens.

“I said well, that doesn’t matter, How long have you lived here? They said ‘Oh, 20 years.’ They were really thrilled to be able to participate, thinking that they couldn’t,” he said.

The cutoff date for being counted in the 2020 census was Oct 15. The date was debated numerous times, with a supreme court ruling finally determining the end date. While the Census Bureau has offered real-time data on response rates through the process, the population numbers and other more specific and localized data will not be made public until reviewed by census staff and President Trump.

Ireland said the politics that played into the rushed wrap-up of the process will likely also end up in court.

“There will probably be a challenge to the census count because they’ve cut it off earlier and that means your Latinos and your black people and low-income people are going to get missed,” he said. “The president wants to accelerate the count so that those people would never be counted. He wants the census data turned over to him by the end of the year so he can edit it and somehow put a spin on it before sending it to congress for reapportionment.”

The reapportionment process is what leads to new congressional and state districts being formed. Districts are meant to each hold similar numbers of residents, which means as the population shifts, the lines must be redrawn.

Over the last decade Colorado’s population has grown enough that the state is expected to gain another seat in congress from another state whose population has diminished. Ireland does not expect Pitkin County’s numbers to have a significant effect on statehouse boundaries. He said, within the state there is more likely to be a shake-up in urban areas.

“A lot of the smaller rural counties will probably be found to have shrunk in population because there are no opportunities and people aren’t moving there,” he said. “Where the big shifts will be are on the Front Range where more seats will be allocated to the high growth areas, Boulder, Fort Collins, Denver itself and the suburbs, and Colorado Springs.”

Reapportionment relies heavily on the assumption that the count is accurate and swatches of the population were not, in fact, missed. In a media briefing last week, census officials issued statements of full confidence in the process despite endless challenges as the count went on.

COVID-19 presented hurdles both in the danger of viral exposure that would be typical of the door-to-door followup ups in past years. Additionally, census workers tend to be older, retired citizens who have the time to take on the temporary positions of traveling through neighborhoods and knocking on doors, but that is an especially vulnerable population to COVID-19 and so that workforce was no longer available.

Beyond the pandemic, the Roaring Fork Valley suffered midsummer fires that made travel and outdoor activities unadvised.

“We’ve dealt with a wildfire season that is arguably one of the worst on record in the Western United States, creating atmospheric conditions so severe that the air quality in at least one Western city was measured as the worst in the world,” said Tim Olsen, associate director for field operations for the U.S. Census Bureau “And we’ve also experienced major civil unrest that gripped our nation in every state and nearly every city while we were conducting census field operations.”

Nevertheless, Michael Cook, chief of the public information office of the U.S. Census Bureau, said the citizenry stepped up and filled out their census surveys on their own, without any follow-up from census workers. He said 67% of the county self-reported, the majority of which submitted their information via the internet. The 2020 census is the first to have an online option.

The Census Bureau is reporting that 99.9% of the population has now been accounted for through the door-to-door follow up process. Locally, though the A2PCCC worked diligently, the street team is not as confident in those numbers.

“It will be really interesting to see what the numbers are because there is a general sense in the committee that maybe the numbers aren’t as complete as the bureau thinks they are,” Brenneman said.

After a year and a half of planning and execution, the local impact of the A2PCCC is now in a holding pattern. The new population numbers will not be released until next year, and the state legislature will oversee the process for redistricting.

Ireland suspects that previous trends will continue in the newest data set. Aspen’s local population has been on the decline in the two previous census counts.

“You’ve heard over and over again that the West End is going dark and stuff about changing populations, but that is not a basis for making policy. You need to quantify it,” Ireland said.

He said the decline of local families reported in the ‘80s and ‘90s resulted in large gains for the local workforce housing program. These days, he suspects the local population shift is not caused by the second-homeowner trend seen in the last decades, but instead is due to the short-term rental trend shifting the tenants of apartment buildings in the core.

“I suspect we will see population declines in those blocks, the way you saw it in the West End but for a separate reason,” he said. “You no longer have the $2,500 [a month apartment] that you can’t rent because it’s more lucrative to put that into vacation rentals. Thats a big, big policy.”

The city’s finance and community development departments have just launched tracking software and mandate all short-term rentals obtain businesses licenses as the first step toward regulating the market.

Even with a successful count, Census Day asks residents to report where they are living on April 1. The COVID-19 disruption included transitioning large portions of the workforce to remote work, and small resort towns throughout the country saw families relocate to live in their vacation homes once school and jobs all went online.

Technically, any increase in the local population would then not be counted until the next census, in 2030. But, the growing population will be relying on the federal aid that is allocated on a per-person basis, just as public transportation and social services are.

Brenneman said inherently, it is impossible to know if you missed residents that you didn’t know about. But at this point, local governments will have to stand by and wait to receive the final counts and the corresponding public dollars.

“Anecdotally everyone knows that more people have moved to Colorado and that our population has grown since the last census in 2010. But exactly how much is uncertain,” she said. “We are hoping that the numbers are as correct and complete as possible so that Colorado can get the federal funds to support our communities.”