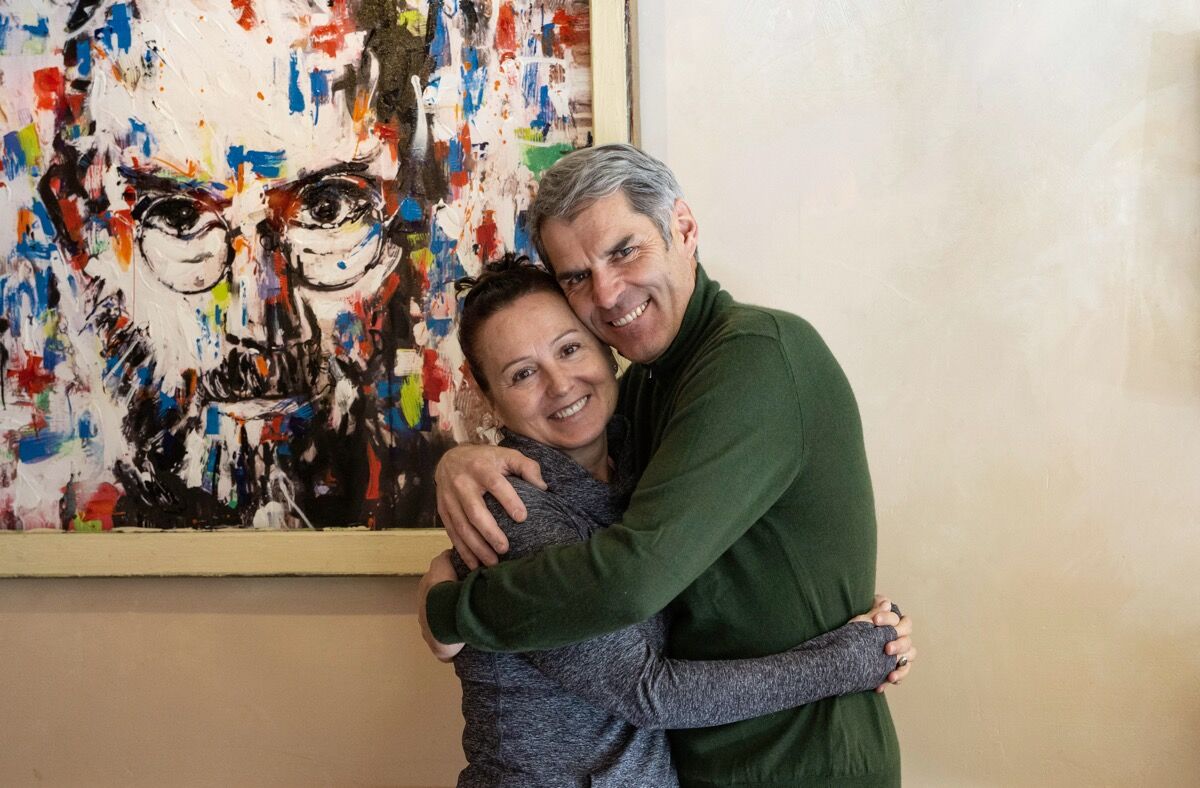 Husband and wife and L’Hostaria proprietors Tiziano and Enrica Gortan embrace in front of a painting of the late Apple founder Steve Jobs in their restaurant space on Wednesday, the same day Tiziano announced the restaurant’s pending closure. 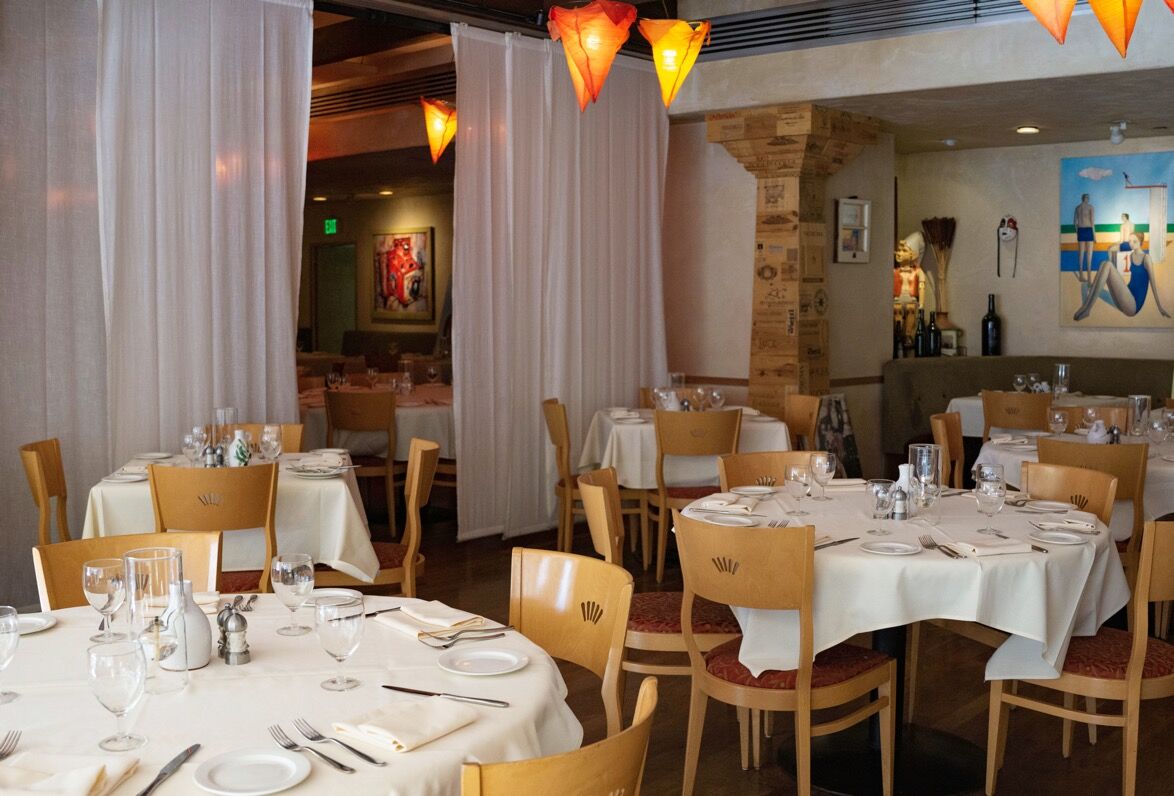 The empty dining room at L’Hostaria Ristorante Wednesday at about 3 p.m., before the establishment opens for dinner service. Despite the restaurant being closed, a string of supporters stopped by the establishment to wish proprietor Tiziano Gortan well after he announced that Nov. 5 would be his last day in business.

Husband and wife and L’Hostaria proprietors Tiziano and Enrica Gortan embrace in front of a painting of the late Apple founder Steve Jobs in their restaurant space on Wednesday, the same day Tiziano announced the restaurant’s pending closure.

The empty dining room at L’Hostaria Ristorante Wednesday at about 3 p.m., before the establishment opens for dinner service. Despite the restaurant being closed, a string of supporters stopped by the establishment to wish proprietor Tiziano Gortan well after he announced that Nov. 5 would be his last day in business.

One of Aspen’s most beloved and longest-running local establishments, L’Hostaria Ristorante, is saying ciao after 25 years of nourishing the community.

The Italian restaurant and bar, locally referred to fondly as simply “L’Host,” will close for good on Nov. 5, owner Tiziano Gortan announced Wednesday.

In reflecting upon the past quarter century, the Italian native said he feels “honored and humbled to have had this opportunity.”

“At the beginning, it was more like an American dream — I’m going to go to Aspen, open a restaurant, sell it, make money,” Gortan said Wednesday. “But that changed drastically after my first five years.”

As fans and regulars are quick to point out, L’Hostaria is more than a restaurant or bar; it’s a local living room that has supported myriad organizations throughout its 25-year run.

Be it hosting lively events that wholly benefit local nonprofits, inviting school staff for a faculty dinner or serving as a home away from home to the Italian ski team while competing in the World Cup, creating a sense of community — and then giving back to it — has always been at the heart of L’Hostaria.

“Not only is Tiziano an amazing restaurateur, he is also an exceptional philanthropic individual,” said Doug Paley, a longtime resident, L’Hostaria regular and Mountain Rescue Aspen rescue leader.

Paley recalled an event that L’Hostaria hosted in support of Mountain Rescue, which he said “will never be forgotten.”

“Tiziano and his amazing staff were a significant part of my Aspen experience over the last 22 years,” Paley said. “L’Hostaria was a place to connect and share stories and adventures. … Its closing will leave a void in the hearts and stomachs of locals and visitors alike.”

If the number of messages, calls and people stopping by the restaurant well before it opened for dinner service Wednesday afternoon is any indication, many are preemptively feeling that impending void.

“This is the biggest compliment I can get,” Gortan said of the outpouring, including former employees from decades ago.

But Gortan’s cup is full, and while certainly bittersweet, the pandemic also created an opportunity to re-evaluate priorities.

“The restaurant business in Aspen has always been changing and evolving, but the last 18 months have brought a new level of stress that made me realize I need to step back and take care of my health and my families both here in Colorado and in Italy,” Gortan wrote in his announcement, posted to the L’Hostaria social media pages.

Gortan served as an avid voice for the restaurant industry amid the pandemic. In January when local restaurants were shut down due to COVID-19, he and local photographer Jim Paussa launched a photo project that aimed to illustrate the closure’s impacts. Gortan displayed the end result — a beautiful yet chilling exhibition portraying half of the estimated 1,200 faces who comprise the local restaurant industry – on the walls of the L’Hostaria dining room.

“Most people don’t realize how many people work in a restaurant,” Tiziano’s wife, Enrica Gortan, pointed out Wednesday. “We really wanted to show the impact.”

A chef by trade, Gortan began working at L’Hostaria when it opened under Dante Medri and Cristina Sartori in 1996, when Gortan was 27 years old. In 2002, he and his wife bought the couple out and have remained the sole proprietors to this day.

“L’Hostaria would not be here without the dedication and partnership of Dante Medri and Cristina Sartori. We give a huge thank you to their work during the first five years of our business together,” the Gortans posted on social media Wednesday afternoon.

When approached with an offer to sell the restaurant mid-September, Tiziano began to envision a life with his family that didn’t involve waking up at 3, 4 or 5 a.m. thinking about the business.

“I tried to avoid [the feeling] — I tried to set it aside, but if you know that is your truth, you can’t lie to yourself. The number 25 is the end of an era, and it just became very clear,” he said. “My feeling is that I did everything for myself, for my family, for my staff, for my community, and I reached something inside where it was time to say, I’m done. And it became very clear in my mind.”

After a proper closing party — with details to be announced — the two look forward to a well-deserved vacation, traveling and spending time with their two daughters and family in Italy.

“It’s been an amazing ride and an amazing experience, especially for two young kids who came from Italy and barely spoke English,” Enrica said.