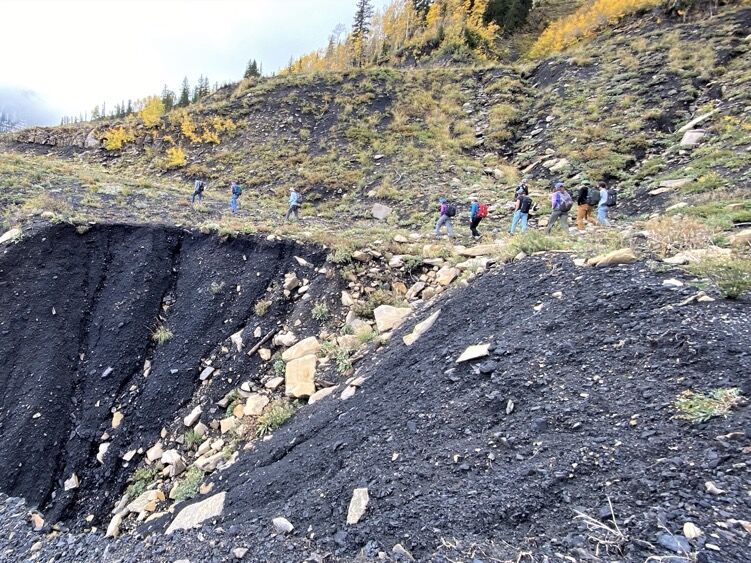 Engineers, Pitkin County commissioners, geologists, climate activists and others traverse a section of the road leading to the Coal Basin mines during a recent site visit. A collapsed section of the hillside reveals coal, rock and soil. 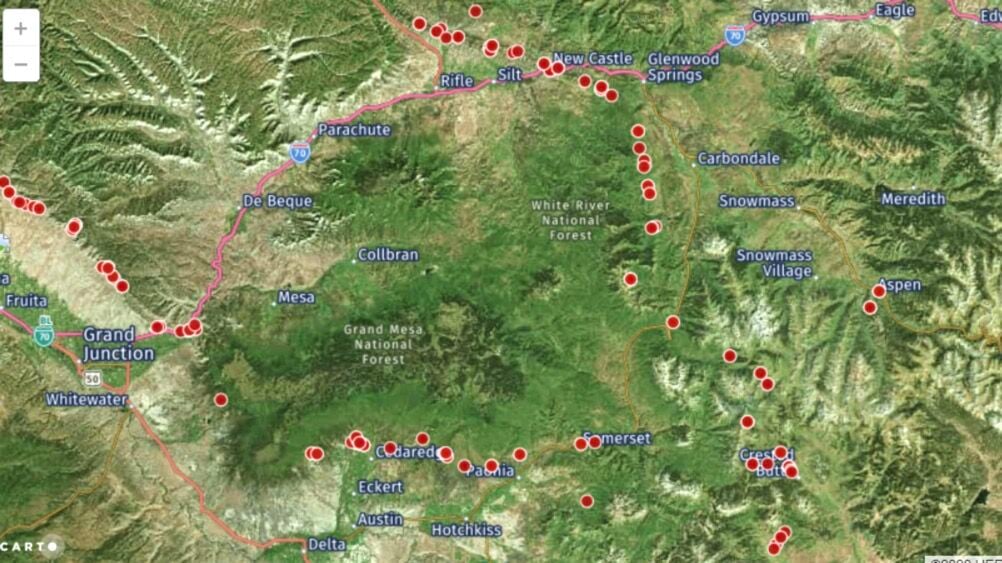 The dots on this map depict abandoned coal-mining sites throughout the Western Slope. 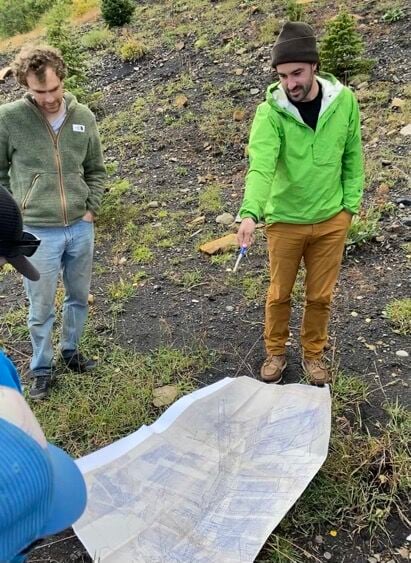 Chris Caskey, co-team leader for the Coal Basin Methane Capture Project, looks over a map illustrating the vast mine-tunnel network under his feet. 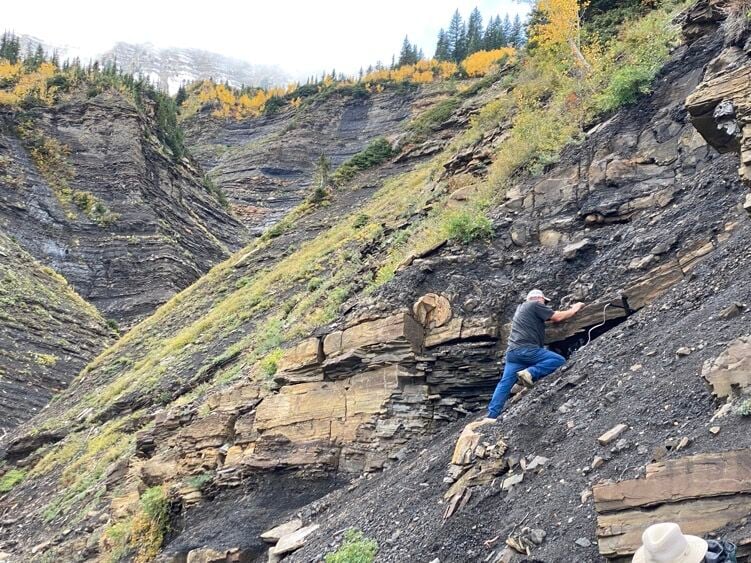 Independent contractor Eric Edwards measures methane being released from one of the Coal Basin mine portals. 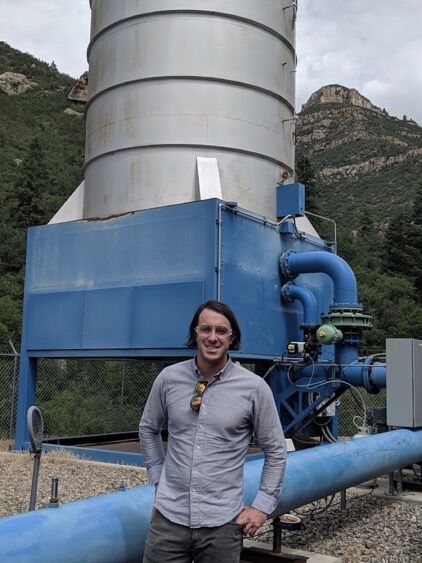 Chris Caskey, co-team leader for the Coal Basin Methane Capture Project, also manages an initiative in the Colorado coal-mining town of Somerset that turns methane into electricity for Holy Cross Energy. Here, he stands next to the methane oxidizer that burns excess methane not needed for energy production. 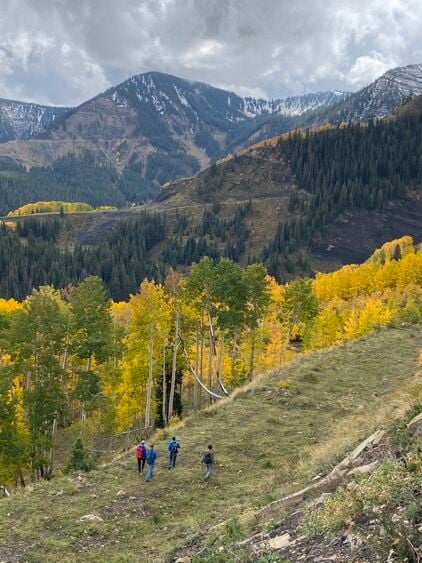 Coal Basin contains many wide roads that were built to accommodate trucks serving the mines of yesteryear.

Engineers, Pitkin County commissioners, geologists, climate activists and others traverse a section of the road leading to the Coal Basin mines during a recent site visit. A collapsed section of the hillside reveals coal, rock and soil.

The dots on this map depict abandoned coal-mining sites throughout the Western Slope.

Chris Caskey, co-team leader for the Coal Basin Methane Capture Project, looks over a map illustrating the vast mine-tunnel network under his feet.

Independent contractor Eric Edwards measures methane being released from one of the Coal Basin mine portals.

Chris Caskey, co-team leader for the Coal Basin Methane Capture Project, also manages an initiative in the Colorado coal-mining town of Somerset that turns methane into electricity for Holy Cross Energy. Here, he stands next to the methane oxidizer that burns excess methane not needed for energy production.

Coal Basin contains many wide roads that were built to accommodate trucks serving the mines of yesteryear.

Pitkin County commissioners passed a resolution last week that could be viewed as an opening salvo in a new battle against the greenhouse-gas emissions resulting from the ongoing release of methane at abandoned coal mines just west of Redstone.

“Destroy the gas!” might as well be the rallying cry from a group of like-minded parties with an informally titled mission called the Goal Basin Methane Capture Project. The stakeholder group includes, but is not limited to, Pitkin County, Holy Cross Energy, the Community Office for Resource Efficiency, the Roaring Fork Transportation Authority and Delta Brick and Climate Solutions.

Delta Brick, which is officially based in Montrose, has received two grants from CORE to conduct preliminary studies on emissions at the mines in the Coal Basin area and to develop a framework for solutions to the problem. The magnitude of the problem is considered severe, according to a memorandum from Zach Hendrix, climate action manager for the county.

“This complex of abandoned mines is releasing 1.3 million cubic feet of methane daily, which annually is equivalent to 41% to 143% of the greenhouse-gas emissions of all human activity in Pitkin County. Capturing and destroying the methane from abandoned mines can reduce their greenhouse potential by 25 to 86 times,” the memo says.

Generally, there are two primary options for destroying the methane. The costliest would be to pipe the gas from the defunct mining site — which lies in a mountainous area without paved roads at an elevation above 10,000 feet — to a facility at a lower elevation. There, the gas could be converted into electricity for use in the Holy Cross power grid.

Another option would be to flare off, or burn, the methane into the atmosphere near the site itself. While this would have a negative impact on the environment in the short term, it’s seen as a far better alternative than doing nothing and allowing “fugitive methane,” as it is called, to be released into the atmosphere at a rate that represents a greater greenhouse-gas effect than all of the human-caused emissions in the county.

However, there are federal regulatory hurdles that stand in the way of action. County officials and members of the stakeholder group are working collaboratively to address them. They’ve reached out to U.S. Sens. Michael Bennet and John Hickenlooper for assistance in the matter.

While the initiative has the support of the Pitkin Board of County Commissioners — three of the five participated in a Sept. 30 site visit to the mine complex to gain a better understanding of the issue — Commissioner Greg Poschman has been its most vocal advocate. He said he’s been trying to relate the “sense of urgency” surrounding Coal Basin methane release in order for the project to gain the support of decision-makers in Washington, D.C., and the Roaring Fork Valley community.

“This is like a cancer,” Poschman said, “and we need to cut it out.”

On the Western Slope alone, there are dozens of abandoned coal mines where methane is being released into the atmosphere, contributing to climate change.

But the local stakeholder group is targeting the Coal Basin because it’s believed to have one of the biggest releases of methane of any mine complex in the region. If preliminary studies on the release near Redstone prove that deep pockets of methane exist, they hope the solution — whatever that may be — will serve as a “pilot project” for similar initiatives across the state.

Project co-leader Chris Caskey of Paonia, a scientist and owner of Delta Brick and Climate Solutions, points out that there are other ongoing efforts in Colorado to destroy methane or convert it to other uses. He assumed managerial duties for one such effort in the coal-mining town of Somerset, located in Gunnison County. That project got underway several years ago, largely through the influence of CORE and with financial support from Aspen Skiing Co.

That project, which involves converting methane to electricity, did not have the regulatory hurdles that Coal Basin faces because it involved methane mitigation within a working coal mine — not one that has been defunct for three decades.

The obstacles, Caskey explained, are rooted in the fact that underground gases are the responsibility of the Bureau of Land Management while the land at Coal Basin falls under U.S. Forest Service jurisdiction.

In the federal government’s view, going into an abandoned coal mine for the purpose of capturing the gas for flaring or some other use (such as power generation) is an activity that’s on par with oil-and-gas production. Methane capture project stakeholders don’t want their efforts to inadvertently open up a rural area to energy leases and production.

As the county’s resolution states, “Pitkin County and the BOCC are in support of the creation of a federal and state regulatory framework that allows for fugitive methane from abandoned mines to be destroyed or used for electricity generation so long as it is not captured or extracted for resale as a natural gas commodity.”

Unfortunately, Caskey said, “There are no good rules on the books for how to clean up methane.”

Until about a week ago, the local stakeholder group was looking to prioritize a request to the U.S. Department of Interior to create “a new regulatory framework” that would allow the Coal Basin initiative and other methane capture ­projects at abandoned coal-mining sites to proceed.

However, according to Poschman and CORE Executive Director Mona Newton, the direct request to Interior Secretary Deb Haaland is being intentionally set aside, for now, following consenus reached on a new strategy: one in which Colorado’s U.S. Sens. Bennet and Hickenlooper will ask the Interior Department to issue an edict that would allow the Coal Basin project to proceed under the Federal Lands Policy Management Act.

That’s the short-term strategy, Poschman said, developed in part because the two senators will wield more influence than a letter to Haaland from commissioners and other project partners. The long-term strategy still involves working with Interior and others to change federal laws to allow methane capture and destruction at abandoned coal-mining sites without opening the door to oil-and-gas development, he said.

“Changing the rules could take two or three years,” Poschman said. “We want to start this now. So we hope to get support from our senators to influence Interior through the FLPMA.”

More alphabet soup is in the picture, as there could be a requirement to conduct an environmental study through NEPA, or the National Environmental Policy Act, before the project can proceed.

At Wednesday’s meeting and discussion of the resolution, Pitkin County commissioners informally expressed a willingness to undertake a NEPA study on a potential Coal Basin methane capture project, if required. It likely would be funded by the county and handled by a third-party contractor.

Poschman said there may be some in the community who would protest a methane-destruction undertaking in the Coal Basin — a project is likely to involve heavy machinery, vehicles and pipelines — because they see it as a pristine, rural area. But the recent site visit proved that the area was a center for industrial activity for many decades, as evidenced by the tools and mechanical debris left behind by mine operators and workers.

The quality of the site restoration, conducted several years after the mine closed in the early 1990s, was poor, according to Poschman. Caskey was more diplomatic, saying the state handled it in a way in which the minimal requirements were met: The portals to the mine complex were closed to prevent people from being able to get inside — but nothing was done to prevent methane from being released into the air.

“The Coal Basin is not a pristine area now,” Poschman said. “We have a global threat to deal with, and we have to make hard choices.”

“It’s an invisible problem,” said Caskey, “but the solution is going to be very visible.”

Much more to do

Newton, executive director of CORE, also participated in the site visit at the end of September.

She pointed out that discussions surrounding methane release aren’t new. She said former CORE director Randy Udall was part of the impetus behind the Somerset project.

There’s much more data on methane emissions for Caskey to gather in the Coal Basin before any decisions can be made, Newton said. Meanwhile, CORE is involved in the effort to lobby federal decision-makers to obtain project approval.

“Right now, we need to do more intensive data gathering to find out if there’s as much methane [underground] as we think there is,” Newton said.

She said while methane destruction projects are a priority, they aren’t less or more important than other environmental efforts, such as the one targeting greenhouse-gas emissions from buildings.

“Buildings do represent 62% of community emissions,” Newton said. “We need to keep tackling those every day. But [methane capture] ranks right up there.”

Poschman said getting past the regulatory hurdle is first and foremost on his mind right now.

“Drilling [to the gas] and mining it might be the easy part compared to [getting approval],” Poschman said.

At Wednesday’s brief BOCC discussion surrounding passage of the resolution, other commissioners expressed their support and some thanked Poschman for stressing the need to act fast on the methane issue.

“I think it will make a big difference, not just for our community but counties throughout Colorado,” Commissioner Patti Clapper said.