The White River National Forest has issued documents approving a plan to harvest timber from in and around the burn scar left behind by the 2018 Lake Christine Fire.

The federal agency announced on Thursday that it has released the final environmental assessment (EA) and draft decision notice/finding of no significant impact (DN/FONSI) for the Basalt Mountain Salvage and Rehabilitation Project, located on the Aspen-Sopris Ranger District in Eagle County.

The final EA describes the proposed activities in detail and analyzes the potential environmental effects of implementation. As identified in the draft decision notice, the project will authorize timber harvest on approximately 2,205 acres, including 2,087 acres of salvage in the Lake Christine Fire burn area and an additional 118 acres for defensible space adjacent to multiple structures in Cattle Creek.

Harvesting constraints built into the design of this project to protect resources are expected to reduce the actual treated area considerably. Of the 2,205 acres contained in units 100 and 300, the Aspen-Sopris Ranger District estimates that between 400 to 700 acres would likely be harvested. In addition, the decision will realign and improve approximately 1.1 miles of the Mill Creek Rim Trail in response to public feedback. 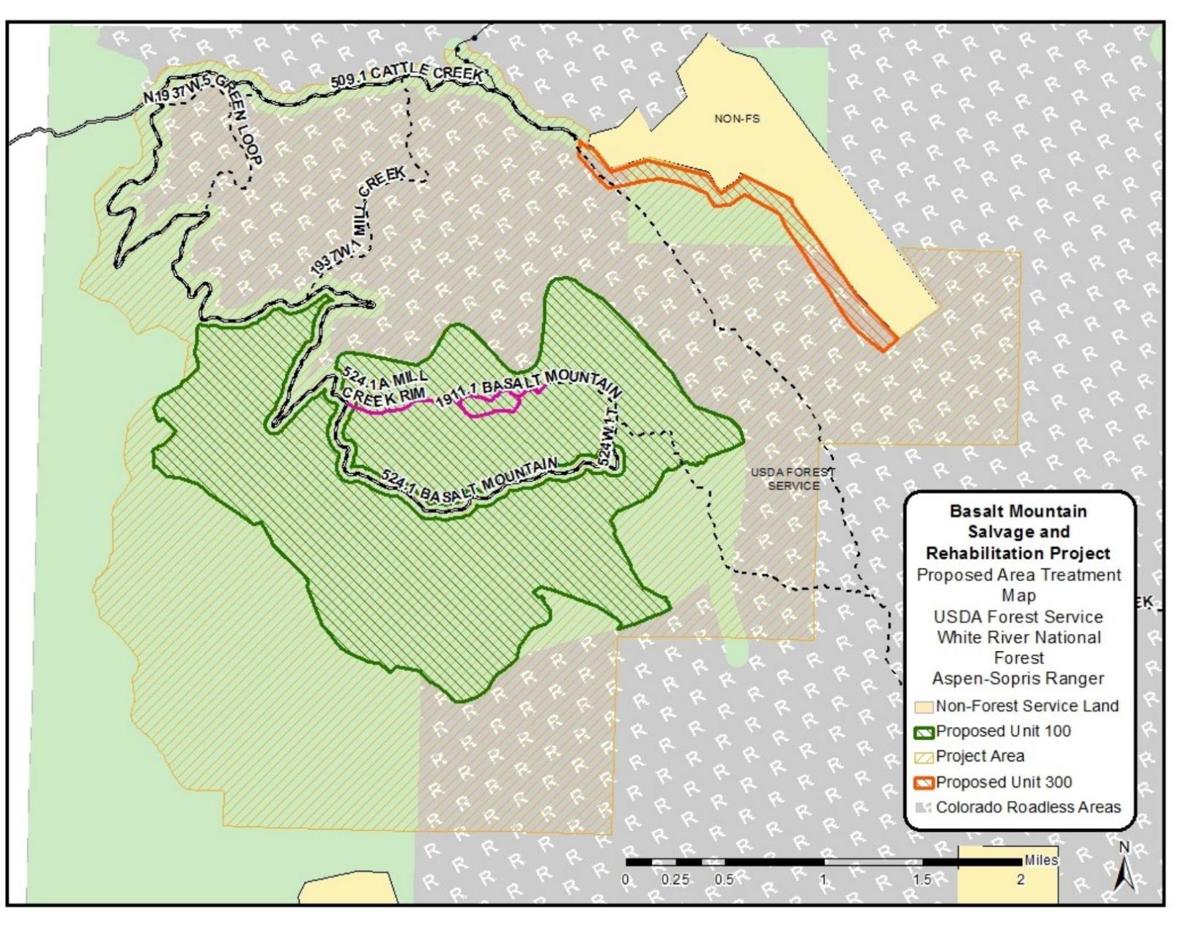 “The selected alternative best meets the purpose and need of the project while balancing effects to natural and social resources,” said Curtis Keetch, acting district ranger on the Aspen-Sopris Ranger District, in a news release.

“The Forest Service carefully considered comments from members of the public and developed site-specific design features to minimize negative effects associated with logging activities. For example, to protect soils and streams, the proposed action restricts harvesting activities in areas with high burn severity, as well as areas with moderate burn severity and slopes greater than 25 percent.”

The release of this draft decision initiates the 45-day objection period. Individuals who submitted timely and specific written comments during the combined scoping and comment period that began on Nov. 29, 2018, will have eligibility to file an objection to the draft decision notice.

The final EA and draft DN/FONSI are available for download on the White River National Forest website at https://www.fs.usda.gov/project/?project=55031. Hardcopies may be reviewed at the Aspen-Sopris Ranger District, in Carbondale. Objections, including attachments, must be filed via postal service, email, hand-delivered, or messenger service to: Objection Reviewing Officer, Planning Department, U.S. Forest Service Rocky Mountain Region, 1617 Cole Blvd., Building 17, Golden, CO 80401; fax to (303) 275-5134; or email to SM.FS.r02admin-rev@usda.gov. Office hours for hand delivery are Monday through Friday from 8 a.m. to 4:30 p.m., excluding holidays.