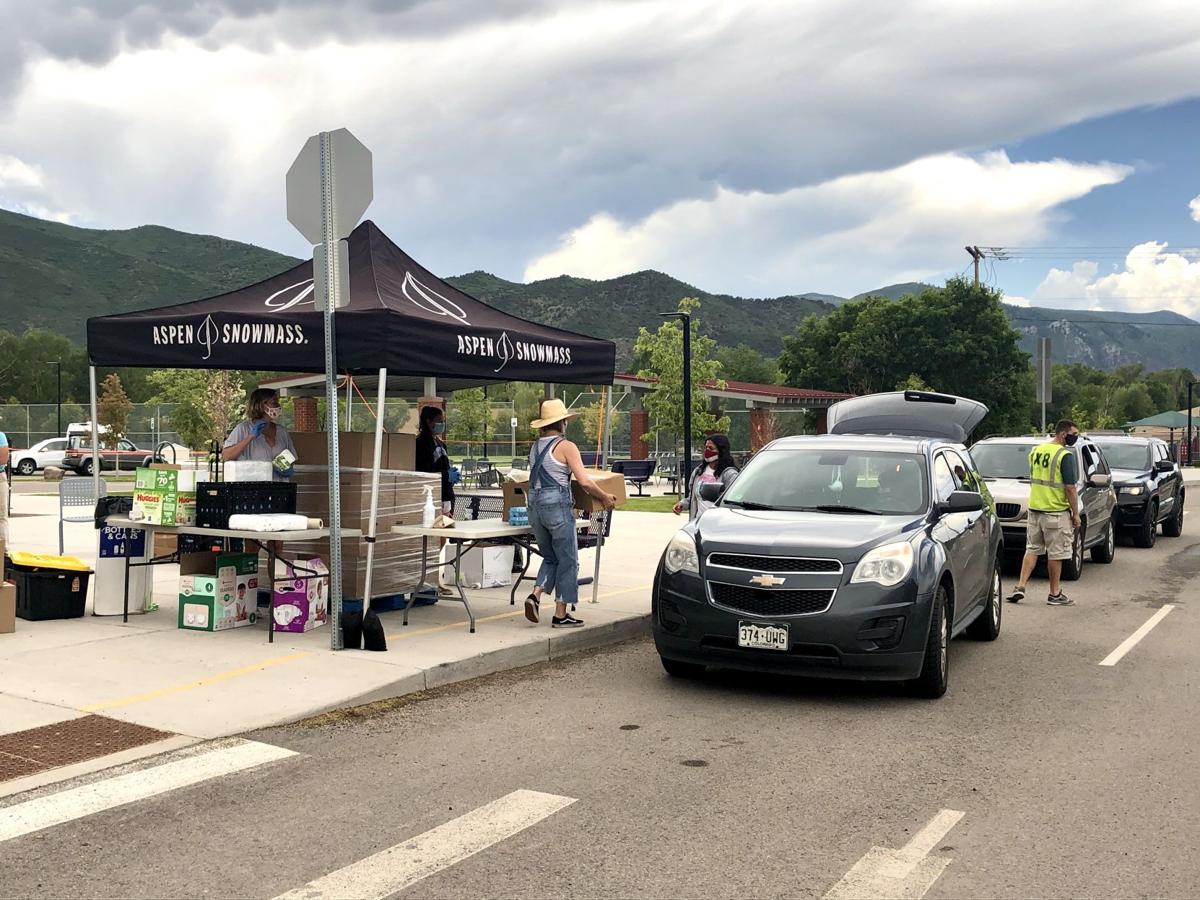 Volunteers distribute various food items and fresh produce last Thursday at Basalt Middle School. The giveaway, a joint effort of Food Bank of the Rockies, LIFT-UP and Aspen Skiing Co., has been underway for the past 15 weeks as a response to the local economic downturn caused by the COVID-19 pandemic. 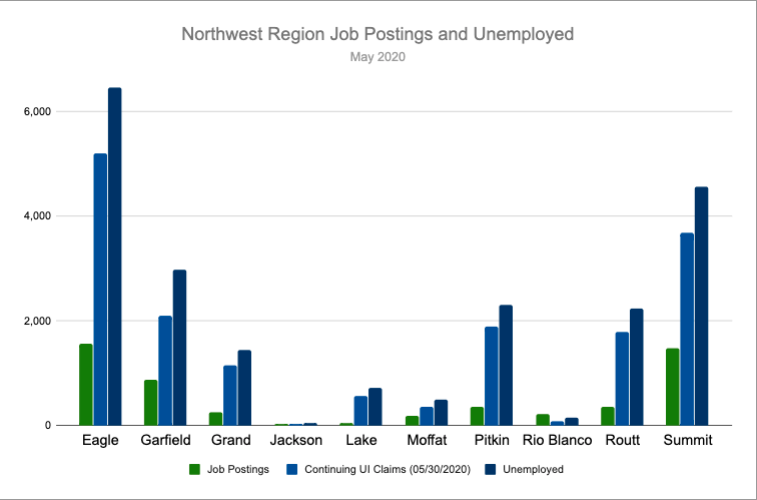 This graphic, provided by the Colorado Workforce Center, shows that due to COVID-19, state claims for unemployment benefits and the number of jobless workers far exceeded the tally of job postings in May within the center’s 10-county northwest Colorado region.

Volunteers distribute various food items and fresh produce last Thursday at Basalt Middle School. The giveaway, a joint effort of Food Bank of the Rockies, LIFT-UP and Aspen Skiing Co., has been underway for the past 15 weeks as a response to the local economic downturn caused by the COVID-19 pandemic.

This graphic, provided by the Colorado Workforce Center, shows that due to COVID-19, state claims for unemployment benefits and the number of jobless workers far exceeded the tally of job postings in May within the center’s 10-county northwest Colorado region.

Pitkin County no longer holds the dubious distinction of having the highest unemployment rate of Colorado’s 64 counties.

Due to the COVID-19 economic downturn resulting from mandated business closures and the early shutdown of ski resorts, the local jobless rate was 23.1% in April, besting all other counties. Prior to the pandemic, the county enjoyed a low unemployment rate over the last several years of less than 3%.

Pitkin improved slightly in May, according to data released by the state labor department June 19. The 20% rate last month was the third highest in the state behind San Miguel County’s 22.1% and Gilpin County’s 21.4%. San Miguel is home to Telluride Ski Resort and Gilpin’s economy is centered around the casinos and hotels of Central City and Black Hawk.

Local and regional unemployment, the pandemic’s impact on the tourism economy and the near-term needs of individuals and businesses are expected to be topics of discussion at a work session of Pitkin County commissioners on July 21. Jessica Valand, director of workforce development for the northwest region of the Colorado Workforce Center of the labor department, has been invited to participate in the discussion and will present data not only on the economic situation in the upper Roaring Fork Valley, but also the other nine counties that fall within her jurisdiction.

“I’m interested in creating a platform for the discussion and seeing what ideas come up,” she said. “I want to see the [Colorado Workforce Center] data, so we can have discussions about what is happening and what they forecast for the future in terms of how to support individuals and businesses.”

When the pandemic began to affect the county from a public health and economic standpoint in late March, Sundeen and other county officials worked to beef up a government-operated economic assistance program to help struggling individuals and families. To date — with funding assistance from municipalities and private sources — the county’s economic relief fund has provided nearly $2.3 million to Pitkin residents for housing, utility bills, food and other needs based on 2,075 total requests in March, April, May and June.

The number of requests and ­overall amount of corresponding payments peaked in April at 1,005 and $1.07 million respectively. Now that more workers and families have been approved since April for state unemployment benefits and other forms of local, state and federal government assistance — nonprofits and private donors also have stepped up to the plate — the county’s relief program is not ­experiencing nearly as much demand as it did two months ago.

For example, through Friday, applications for aid this month numbered 29 and only $34,421 in funding had been approved. Sundeen said she expects June’s figures to rise this week, but noted that fewer and fewer requests are being approved because qualifying for funds has become harder, given that so many ­people are getting state unemployment benefits and related federal stimulus dollars that amount to an extra $600 per week. The county has been focusing on those in the community who need the most help, she said.

The $600-a-week federal stimulus to workers, however, is designed to end on July 31 — and that could spell problems for the individuals and families who have been laid off from their jobs and won’t be returning to them anytime soon because of the recession.

Sundeen said part of the conversation on July 21 will revolve around planning for long-term support of those affected by the economic slowdown, which is hitting tourism-dependent sectors of the economy ­particularly hard.

“We’re pretty much a one-industry town, and the lack of diversity hits hard when there is a downturn,” she said.

There may be a need for more local job-training and skills-building programs, she added, to help shift some of the affected workers into whatever jobs may be more readily available in the near future.

“We want to know what the [Colorado Workforce Center] is projecting,” she said, “and what are the [employment and financial relief] needs going to be going into the fall and winter.”

In other words, the coronavirus recovery period will be a time of looking at things differently.

“I don’t have any specific plans but I can tell you that we see the need for assistance is going to last longer,” Sundeen said. “We’ll be trying to come up with the ‘next steps’ for whether we provide economic assistance, or our partners do, or both.”

Valand said her office has a lot of data relating to what is occurring within the region now, but it’s not so much in the business of providing future projections.

“I’ve been speaking to counties on how many people are unemployed, what does their economic mix usually look like, and what sectors of the economy have been hardest hit by COVID based on where the unemployment claims are coming from,” she said. “My basic plan is to provide a snapshot of that data and offer some considerations as they start planning into the fall and winter as to what the impacts might be.”

Valand said in May, Pitkin County officially had 2,309 unemployed workers, which translates into the aforementioned 20% jobless rate — twice as high as the state’s 10.2% unemployment rate last month.

“When we look at any county with unemployment rates above the state average, they are almost universally tourism-based economies,” she said.

Valand said 69% of the revenue that comes into or is generated within Pitkin County is related to tourism, a percentage similar to Summit County.

“We know when we look at the unemployment claims filings, the industries that have had the most filings week by week during this crisis have been tourism-based,” she said, “hotels, restaurants, lodging, ski resorts. So it’s not surprising that the counties with the highest unemployment rates also are the ones that have the highest percentage of revenue dependent on tourism.”

What will be challenging going forward, Valand added, is figuring out what types of businesses within a particular county or region will remain open and how great the demand for their services will be.