A Marble-area landowner has agreed to reclaim earth-moving work performed last summer along the Crystal River and submit a new plan for thorough review, according to Gunnison County officials.

Contractors for Marble Airstrip LLC pulled their heavy equipment from the site 2 miles west of Marble earlier this month. Meanwhile, a major water-engineering firm in Colorado was hired by the property owner to rectify the issue with the county.

“We have yet to reach a full resolution with the ­applicant. That will take some time, with the amount of work that was completed,” Sean Pope, a planner with Gunnison County, wrote to the Aspen Daily News in an email last week.

He said Wright Water Engineers have taken over negotiations with Gunnison County on behalf of Marble Airstrip. The property owner was previously represented by ERO Resources.

“They are going to submit an initial plan in the coming weeks to get the site ready for winter,” Pope wrote. “After this, they will have time to do more analysis over the winter and submit for a final plan in spring of 2023. One of the main challenges is to establish the condition of the site before the work took place, then, once this is established, to find a way to ensure the net impact of the work results in 0.0 foot of change — ‘no rise’— in the floodway.”

Marble Airstrip was issued a stop-work order, also known as a red tag, on Aug. 12 for earth moving along the banks of the Crystal River to stop erosion at the airstrip property. ERO contended the intended work qualified for a federal “non-notifying Nationwide Permit” and it gave the U.S. Army Corps of Engineers a “courtesy notice” in December 2021. The work was acknowledged by the Corps.

An inquiry in August by a citizens’ conservation group called the Crystal Valley Environmental Protection Association triggered a closer review by the U.S. Army Corps of Engineers and Gunnison County. The Corps determined the work exceeded what was allowed under the Nationwide Permit. In addition, Gunnison County officials determined the work must go through a more robust county review and permitting process. The county red tag said the work violated its land-use regulations on general standards for development in sensitive wildlife areas and protection of water quality. The county also said an application for a permit for floodplain development was necessary.

The Crystal Valley Environmental Protection Association voiced its concerns after members pointed out the extent of the work along the Crystal River in July and August, according to John Armstrong, the group’s president. He said Friday that he was glad to hear Gunnison County is expanding its review, but he questioned why it is taking so long to require the remediation.

However, Armstrong also said he is not concerned about instability of the riverbank or the threat of high water resulting from the work undertaken so far by Marble Airstrip, based on aerial photographs he has seen of the site.

He said the bigger-picture issue is to ensure projects such as this are properly reviewed to make sure instability and downstream flooding doesn’t result from the work.

“Who knows what the ultimate product would have been?” he said.

The group is also concerned about loss of wildlife habitat if the work isn’t performed correctly.

ERO initially responded to Gunnison County that it appeared the project was exempt from county regulations on protection of water quality because the project was able to proceed under federal rules. ERO also said the work appeared to qualify for an exemption from a county floodplain development permit because it was necessary to alleviate flood hazards and protect the property from erosion.

“Extreme weather events during the 2021 ­monsoon season and ongoing spring runoff have resulted in extensive erosion of the adjacent (eastern) riverbank and opposite (western) riverbank, causing many large conifer trees to topple into the river, ponding water and pushing river flows toward the airstrip,” ERO wrote. “Several hundred feet of bank, levee and bank protection were removed by the river over the past one to two years, putting the airstrip at risk of inundation and erosion.”

An application for a reclamation permit listed Marble Airstrip LLC’s mailing address as the same post office box in Bentonville, Arkansas, as Walton Enterprises LLC. The LinkedIn page for Walton Enterprises says it is a “family-led, private family office supporting the personal, philanthropic and business activity for multiple generations of Sam and Helen Walton’s family.”

The contact address for Marble Airstrip has since been changed in documents submitted to Gunnison County.

Pope said the hope is a plan of action for reclamation will be settled in coming weeks. 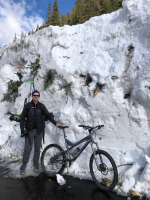