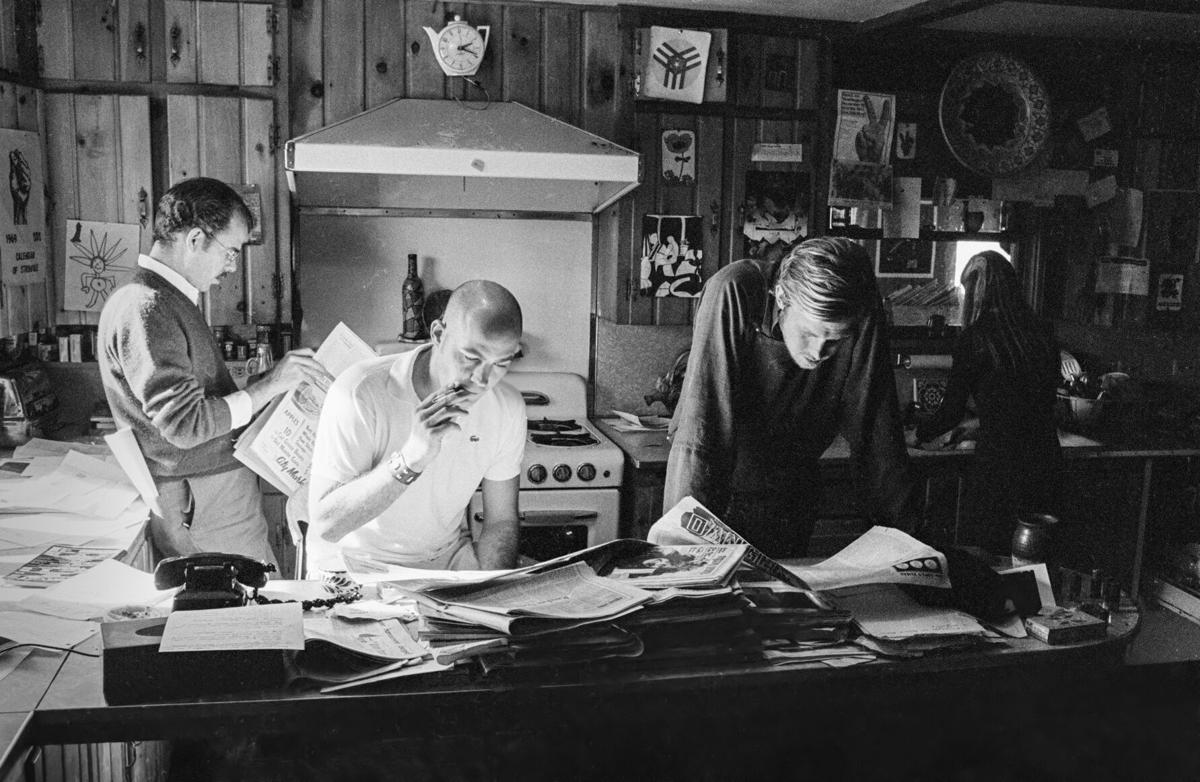 Hunter Thompson in the kitchen of his Owl Creek home, surrounded by friends, scouring the pages of local newspapers. 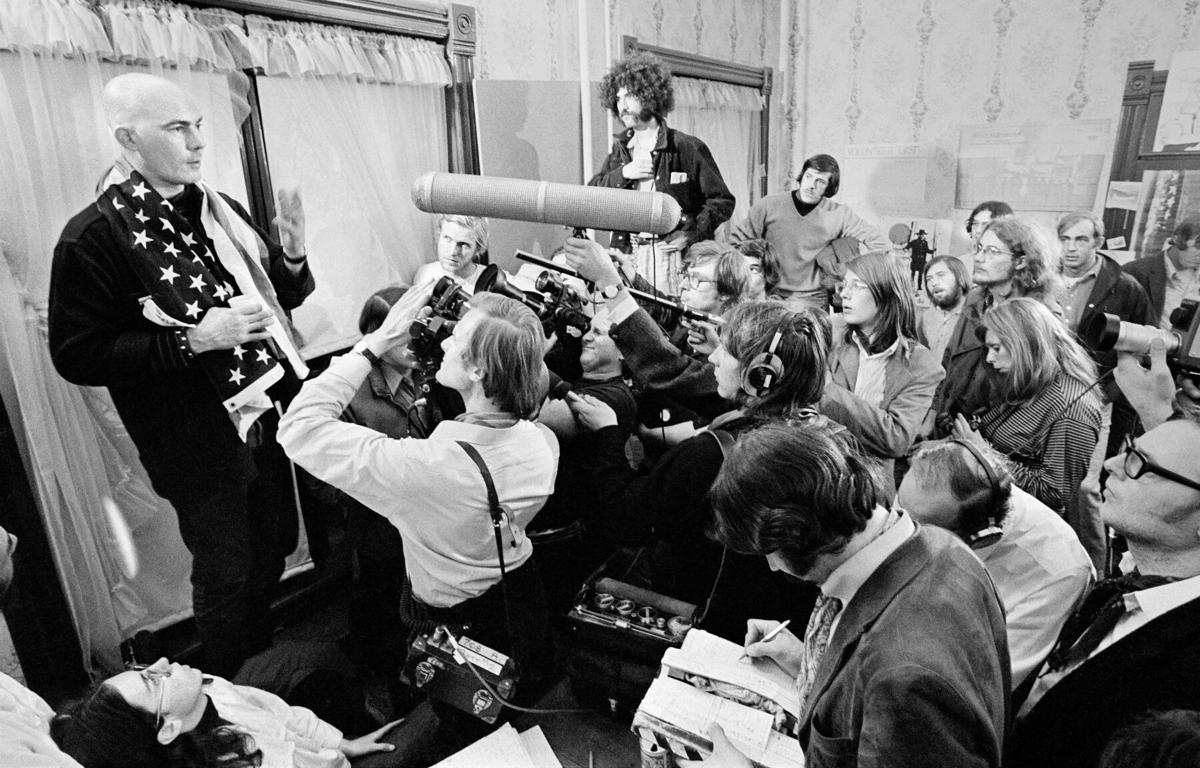 A crowd of local media packs around Hunter Thompson as he gives his concession speech, formally acknowledging his failed political attempt at gaining the Pitkin County sheriff title in 1970. 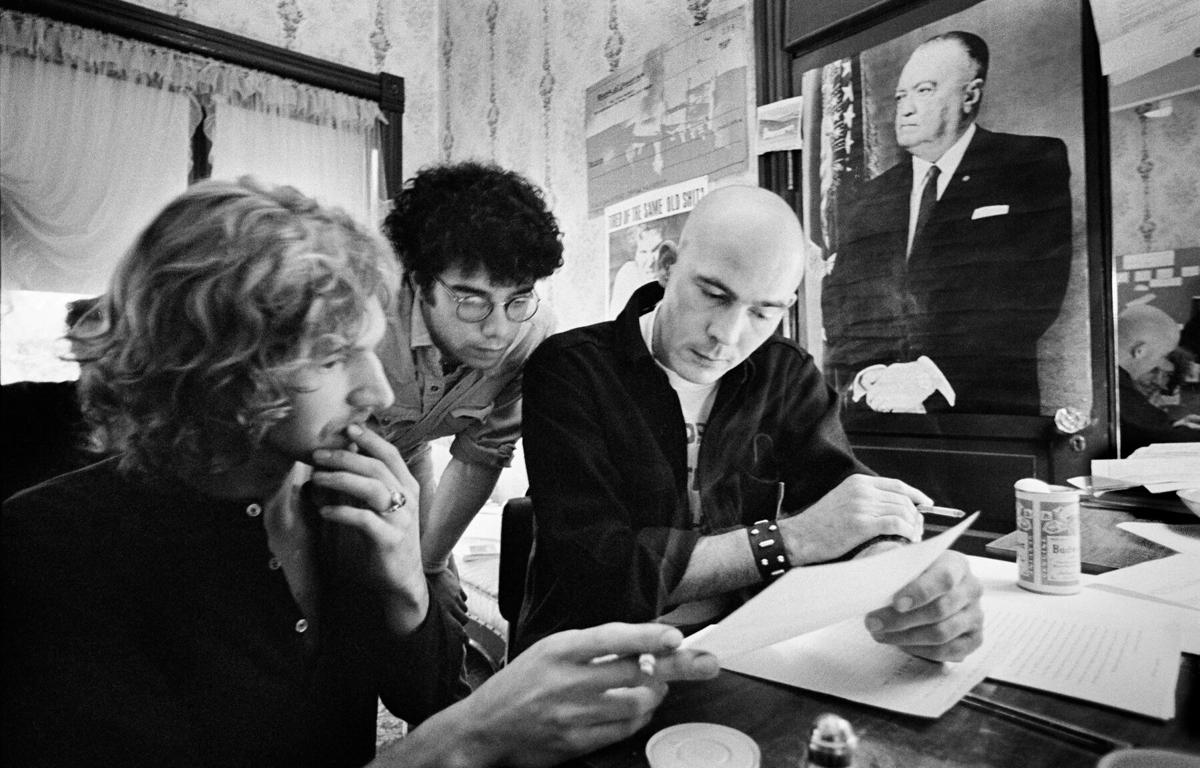 Hunter Thompson and supporters of his campaign for Pitkin County sheriff reviewing a draft of a newsletter. 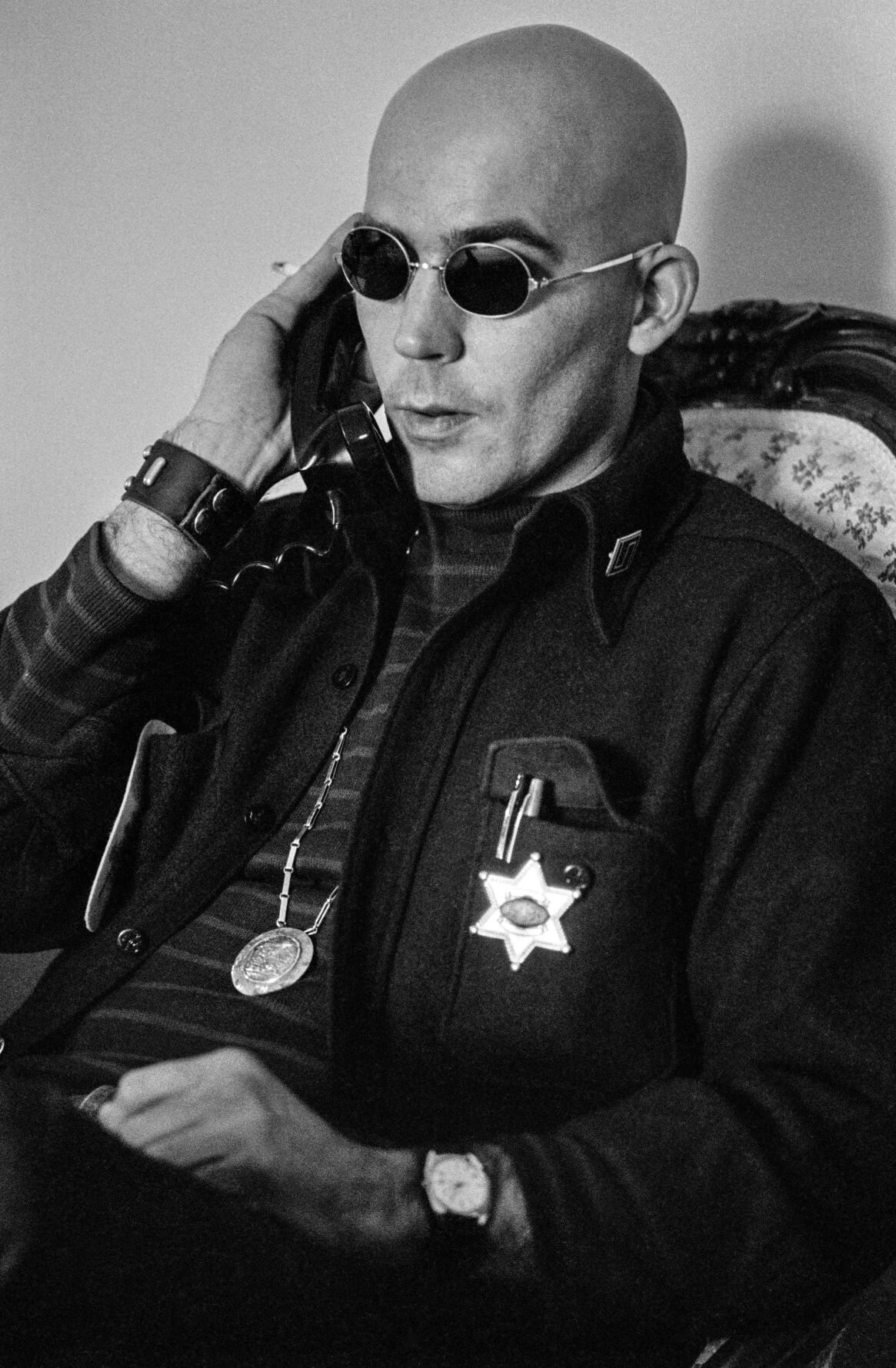 Hunter Thompson poses in shades, sporting a badge, during his campaign for Pitkin County sheriff in 1970, which hinged on a platform of “freak power.”

Fifty years after Hunter S. Thompson’s campaign for Pitkin County sheriff, the late journalist’s influence on Aspen’s cultural and political landscape lives on, while his platform is in many ways still relevant today.

Thompson did not secure the most ballots on the night of Nov. 4, 1970 — the incumbent establishment won by nearly 500 votes — but he mobilized a new generation of activism and sparked a movement that would persevere decades beyond his short-lived political tenure and untimely death.

“Although the battle was lost, the war was won,” said Daniel Joseph Watkins, a Thompson authority and co-director of the highly anticipated new film, “Freak Power: The Ballot or the Bomb.”

The documentary follows Thompson’s wild and irreverent campaign and will premiere to an already sold-out audience at the art museum this evening in conjunction with Aspen’s first-ever “Freak Power Day.” Featuring original scoring and a polished production team, the 90-minute film will release to the masses on Amazon next Friday.

The 1970 campaign for sheriff of Pitkin County was “one of the most substantive and captivating periods of Hunter Thompson’s life — as well as one of the least known,” Watkins writes in the “Freak Power” book.

He called the film by the same title a natural outgrowth of the book after uncovering reels of footage from the campaign. The Gonzo Gallery owner penned and published the book in 2015 alongside fellow Aspenite and artist Ajax Phillips, who also co-directed the film.

Now popularly known as a gonzo journalist, common mythology in the industry claims that the term “gonzo” was first applied to Thompson’s work, and it was Thompson who owned the word and turned it into part of the mainstream vernacular.

Contrary to the caricatures attached to the man — think Raoul Duke in “Fear and Loathing in Las Vegas” — Thompson was more than an acid-induced lunatic tripping balls in Bat Country.

Among Watkins’ goals with his gallery, book and film? To show the world a Thompson they may not know.

In his later years, Thompson became a countercultural icon for his literary style and his well-publicized antics, which often overshadowed his early contributions to political thought, Watkins writes in “Freak Power.”

“Freak Power: The Ballot or the Bomb” portrays the endeavors of a young, impassioned journalist who is described on the campaign trail as “all business.”

“This movie is going to be powerful because it’s going to show a different side of Hunter that is really the serious, significant, substantial part of who Hunter was and why he became famous,” Watkins said in an interview outside the gallery on Wednesday.

Apart from a piece on Joe Edwards’ 1969 campaign for mayor of Aspen — titled “Freak Power in the Rockies” that ran in Rolling Stone magazine — few of Thompson’s musings on Aspen were ever published.

Set amid the Nixon era and a period of polarized politics in the U.S., “Freak Power” opens to a scene documenting scores of young Aspenites piling into the Isis Theatre to witness the debate between Thompson and incumbent Sheriff Carrol D. Whitmire.

As former Pitkin County Commissioner Joe Edwards recalled of the event in the film, “Small-town sheriff just wanted to talk about speeding tickets or something.”

Thompson, meanwhile, dominated the debate with progressive ideals that resonated with a generation of freethinkers, intellects and spiritually disenfranchised citizens averse to participating in local government — also known, by definition at the time, as “freaks.”

While the “Freak Power” platform focused more seriously on regulating development and running the “greedheads” out of town, decriminalizing drugs and disarming the Sheriff’s office, it also included more flippant measures, such as changing the name “Aspen” to “Fat City” to detract investors, sodding the streets to rid the downtown area of traffic and banning hunting and fishing to nonresidents.

“Hunter was going to try to move the conversation by taking outlandish positions,” Edwards says in the film.

As Whitmire publicly dismissed the “freaks” as a viable movement, Thompson embraced the term and all that it represented.

“To deviate from the style of government that I deplore today is not only wise but necessary,” Thompson is documented saying.

A vociferous critic of Nixon and his administration, Thompson felt compelled to enter the political fray after covering the 1968 Democratic National Convention in Chicago.

“I went to the Democratic Convention as a journalist and returned a raving beast,” Thompson famously scribed in an essay at the time.

Disgusted and energized, the Woody Creek resident convinced local “hippy lawyer” Joe Edwards to run for mayor of Aspen, as Thompson lived outside city limits. The agreement was that if Edwards was elected mayor, Thompson would run a vicious campaign for sheriff in 1970.

Among Thompson’s colorful campaign art, which became an integral part of his race, was an advertisement: “Hunter Thompson is a moralist posing as an immoralist. Nixon is an immoralist disguised as a moralist.”

“Hunter Thompson’s ­combination of law enforcement, criminal justice and the environment in his campaign was a new hybrid that had never been seen before,” former Pitkin County Sheriff Bob Braudis says in the film.

Braudis began his political career in 1970, volunteering for the Freak Power campaign. His job was to register his long-haired ski bum friends, Braudis said in an interview Wednesday. That experience became critical to his own career, he noted.

A self-proclaimed punk from South Boston, Braudis credits Thompson for inspiring and, in part, informing his 24-year-career in public service.

“Hunter was often my North Star,” Braudis says in the film, particularly in the areas of public safety and policymaking.

Edwards, who went on to become a Pitkin County commissioner alongside fellow freak Dwight Shellman, echoed this sentiment.

“We accomplished a lot of what we envisioned in the area of development,” Edwards says in the film. “The more relaxed, friendly, community service-oriented type policing that Hunter was advocating did come to pass — and [has] existed with peace in the valley for the last 30 to 40 years.”

The film perfectly illustrates this, with two side-by-side photos of the sheriff’s deputies sitting on the steps of the Pitkin County courthouse. The first, circa 1968, shows five uniformed deputies, all sporting cowboy hats and holding guns. The photo from 1981 shows a larger, relaxed group of men and women — some of whom are wearing jeans.

“I’m not so sure [Thompson] wanted to lead,” local artist and “Freak Power” crew member Travis Fulton says in the film. “I think he wanted to create in other people the desire to take over their own government.”

Fulton in 2017 found in his barn an old canister of film, labeled “Hunter Thompson for Sheriff.” It ultimately led to the creation of the film.

“Once we saw the breadth and the beauty of the footage, we decided to make the movie,” Watkins said.

All told, 45 reels of film — including five that had never been developed — were digitized for the making of “Freak Power.” The film archive also includes 5,000 photos from “Freak Power” photographers David Hiser and Bob Krueger.

While the pandemic delayed the production of “Freak Power” and plans for the festival circuit, the timing of the film’s release — weeks before one of the most divisive, contentious elections in U.S. history — is as relevant as ever.

“We felt like the issues that Hunter talks about — trying to protect the environment, trying to have more community-based law enforcement and trying to transform politics through engagement — were really important,” Phillips said. “And especially right now, because I think a lot of people feel very frustrated with the political system in the U.S. right now.”

“Freak Power” producer Mimi Polk Gitlin noted the parallels between Black Lives Matter and the younger generation driving the movement with issues of racism and police brutality in the late 60s and early 70s.

‘Everyone will feel something’

Setting aside Thompson’s legacy for a moment, Braudis needed to gush about the accuracy and execution of the film, which he witnessed “from seed to screening.”

“Watching the movie took me back to 1970. As I watched the evolution of the edits, the final product, I think, is perfect,” Braudis said Wednesday. “I think it’s so well done that everyone who sees it will feel something.”

Braudis also credits the award-winning team that Watkins and Phillips curated, which includes Gitlin — who produced “Thelma and Louise” and “The Breadwinner” — film editors Angus Wall — whose credits include “The Girl with the Dragon Tattoo” and “The Social Network” — and Will Znidaric, of the documentary, “Winter on Fire.”

“Freak Power” will continue to stream on other platforms, including Apple and Google Play, shortly after its Oct. 23 release on Amazon.

As part of the informal, inaugural “Freak Power Day,” Mayor Torre will formally rename Aspen “Fat City” for the day, during a noon proclamation outside the Pitkin County Courthouse. In Thompson’s honor, the streets in front of the Gonzo Gallery, 601 E. Hyman Ave., will be sodded. The Freak Power team will also activate a voter registration area outside the gallery.

“Hunter helped galvanize political engagement and made it sexy and fun in a way that most people are totally incapable of making local politics interesting,” Phillips said.

The community is encouraged to dress up in ’60s- and ’70s-inspired attire today as part of the day’s festivities, which will continue with the film’s sold-out screening at Aspen Art Museum. Celebrating Thompson’s legacy and sharing the film with Aspen before releasing it to the world was important to the “Freak Power” crew, Phillips said.

“Hunter S. Thompson is an inspiration to a lot of people about getting off your couch and doing something. His campaign for sheriff was exactly the kind of citizen initiative that is inspired and inspiring,” Torre said Wednesday. “He talked about an Aspen that is of the people, for the people and by the people — and I agree with that.”

Where: The Pitkin County courthouse and outside the Gonzo Gallery. A sold-out screening of “Freak Power: The Ballot or the Bomb” will later screen at Aspen Art Museum

When: Today. Mayoral proclamation will take place at 12 p.m. at the Pitkin County Courthouse. Freaky shenanigans will follow outside the Gonzo Gallery.

What: “Freak Power: The Ballot or the Bomb’”

Where: Amazon. The film will be added to other streaming platforms in the near future.