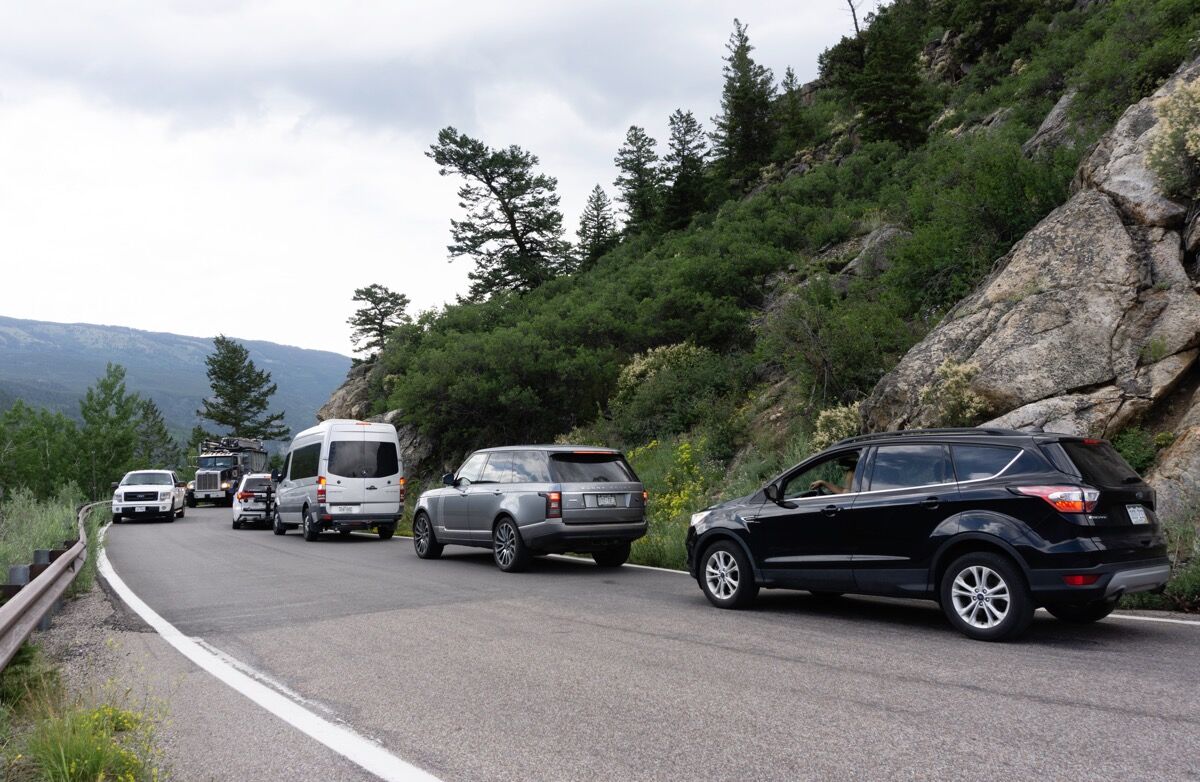 Traffic crawls along Independence Pass Wednesday afternoon. On Tuesday, the mountain pass closed briefly — for about five minutes — because of a mudslide. After reopening, caution was advised for travelers. 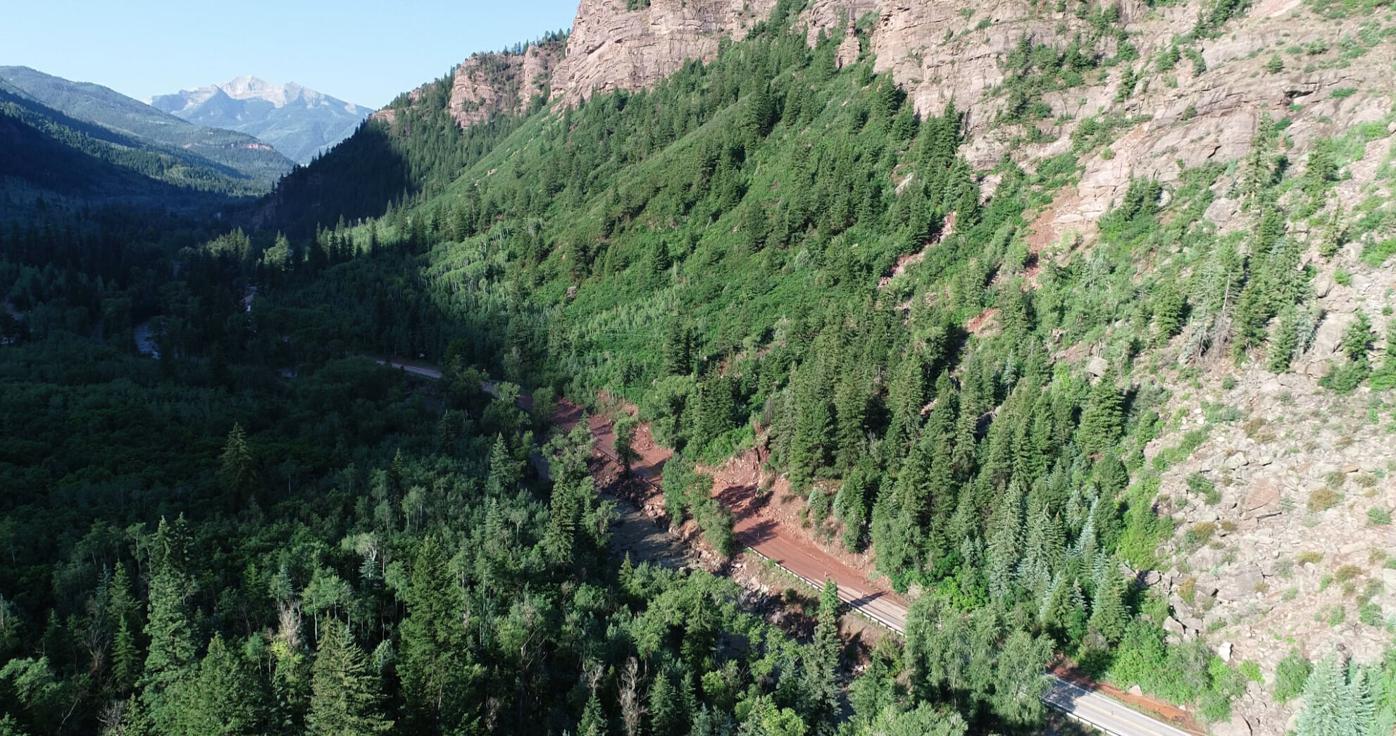 The mudslide that shortly after midnight Wednesday morning closed Highway 133 in both directions just north of Redstone Boulevard, photographed by drone.

Traffic crawls along Independence Pass Wednesday afternoon. On Tuesday, the mountain pass closed briefly — for about five minutes — because of a mudslide. After reopening, caution was advised for travelers.

The mudslide that shortly after midnight Wednesday morning closed Highway 133 in both directions just north of Redstone Boulevard, photographed by drone.

Interstate 70 through Glenwood Canyon remained closed Wednesday after multiple mudslides made their way onto portions of the critical roadway late Tuesday night.

“There is no estimated time of reopening,” Elise Thatcher, Colorado Department of Transportation Region 3 communications manager, said in an email shortly after 4:30 p.m. Wednesday. “We’ll continue to review clean-up progress and the weather over the next hour [and] throughout the evening.”

I-70’s east and westbound lanes through Glenwood Canyon were completely shut down Tuesday beginning at 8:45 p.m. due to a flash flood warning being in place.

Later that night, and into the early morning hours Wednesday, five mudslides occurred in Glenwood Canyon — three on I-70’s eastbound lanes, one on its westbound lanes and another on the Bair Ranch exit’s off ramp.

Thatcher confirmed that no vehicles were trapped in the mudslides when they flooded sections of roadway with water, mud and small rocks.

“Between the unrelenting weather forecast and the impacts we are seeing throughout Colorado, CDOT is asking travelers to take extra precautions, plan for additional time and double-check conditions before traveling,” Shoshana Lew, CDOT executive director, said in a news release issued Wednesday afternoon.

South of Carbondale, a section of roadway along Highway 133 near McClure Pass was also hit by an “8-foot mudslide” Tuesday night, the news release stated. Highway 133 opened Wednesday with one lane of alternating traffic.

Last August’s Grizzly Creek Fire, which ignited along I-70 through Glenwood Canyon, charred more than 32,000 acres. The fire’s significant burn scar, ­coupled with strong pockets of rain recently, have forced I-70 closures periodically this summer.

The region’s immediate and extended weather forecasts — although good news for the drought-stricken land — indicate even more mudslides might be headed onto I-70 through Glenwood Canyon.

“The rain rates are expected to exceed a half inch in the stronger cells. So if they fall over Glenwood Canyon, then there could be a concern for debris flows,” Erin Walter, a meteorologist with the National Weather Service Forecast Office in Grand Junction, said Wednesday. “That’s what we’ve been monitoring the last few days and we’ll just continue to monitor.”

According to Walter, Glenwood Canyon’s forecast calls for a 70% chance of rain on both Thursday and Friday afternoon.

“The next two days seem to be a very active [weather] pattern,” Walter said Wednesday.

The chance of precipitation then drops to 50% on Saturday and to around 40% on Sunday, before ramping back up again next week.

“These types of storms are really difficult to pinpoint,” Walter explained. “These cells have a tendency to develop rather quickly. … It’s a pulsey situation.”

I-70’s closure presented challenges to residents, tourists and countless truck drivers trying to make their way into the Roaring Fork Valley. In an email Wednesday evening, City Market spokesperson Jessica Trowbridge said the company was anticipating a three- to four-hour delay for deliveries to its locations from Glenwood Springs to Aspen.

“Our teams are monitoring the situation and are working diligently to get products to all impacted stores as quickly as possible,” Trowbridge said.

Independence Pass, which serves as an alternate route in and out of the Roaring Fork Valley, prohibits large delivery trucks from maneuvering its at times steep, narrow and winding portions of roadway.

Jimmy Yeager, owner of Jimmy’s An American Restaurant & Bar in Aspen, also said in an email Wednesday that I-70 closures through Glenwood Canyon had caused “a massive headache” for suppliers who had to make the trek from Denver.

“They are doing their best not to make it our problem,” Yeager said. “We have seen only minor disruption — and in keeping with the proper perspective from what we’ve gone through over the past 16 months, this is a trivial inconvenience for us and our guests.”