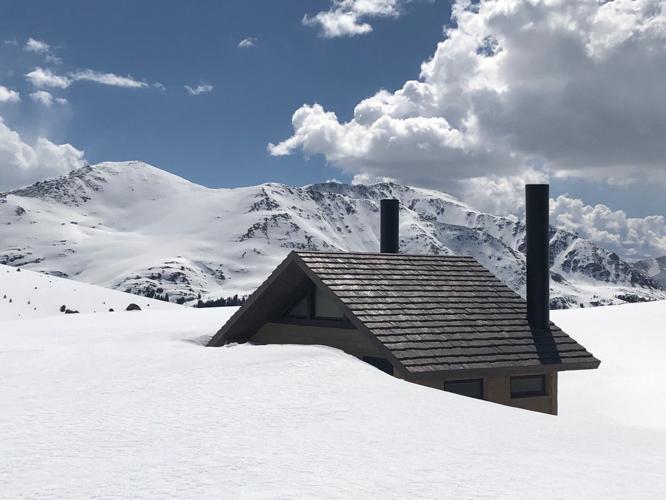 The bathrooms at the summit of Independence Pass remain nearly buried by snow on Tuesday. Due to historic conditions on the pass, Colorado Department of Transportation crews will need more time to get the iconic roadway open. 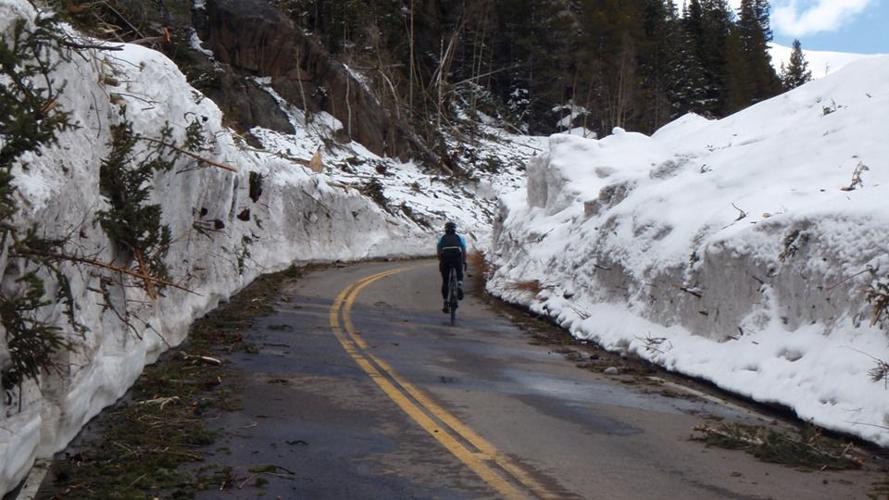 A cyclist makes their way on path cleared through avalanche debris near the Braille Trail pullout on Independence Pass on Saturday. “I’ve never seen anything this dramatic and powerful in the mere 36 years I've lived and cycled in Aspen,” wrote the photographer in a Facebook post accompanying this image. “The power of the mountains is never to be underestimated. If one does, they may lose everything.” 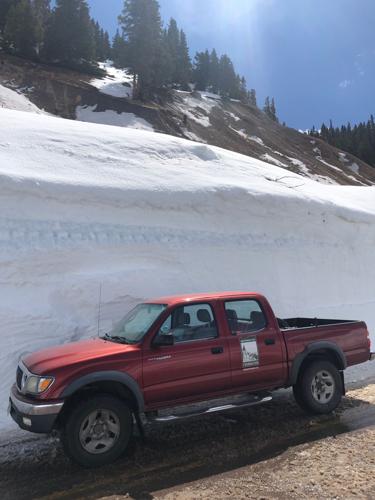 The snowbank nearing the summit of Independence Pass towers over a vehicle on Tuesday.

The annual spring opening of Independence Pass is likely to be delayed into the first week of June, which would be more than a week later than normal.

“I am guessing we are into the first week of June to get the pass opened,” Colorado Department of Transportation spokeswoman Tracy Trulove said Tuesday. ”Our guys will shoot for that,” she added, when asked if the pass could open around the weekend of Saturday, June 1.

The last time the Continental Divide-spanning pass opened late was in 2008, following another epic winter. That season saw an opening that was roughly a week behind schedule, according to records referenced by Independence Pass Foundation director Karin Teague. The pass, which connects Aspen and Twin Lakes via State Highway 82, is normally scheduled to open the Thursday before Memorial Day weekend, which is a week from Thursday.

Teague traveled to the summit with CDOT workers on Tuesday. Crews clearing the roadway take pride in opening the road on time and would like to do so again this year, she said.

“Were it not for the really unprecedented avalanche year, I think they would,” Teague said.

CDOT crews reached the summit in a snowcat on Monday, according to Teague, and the road is clear of snow about halfway up the top cut. But an opening next week is not in the cards this year, after a winter that saw a snowpack that was in the neighborhood of 140 percent of average for much of the season.

Teague said she was astounded by the depth of snow in the higher reaches she saw on Tuesday.

“The amount of snow, even up top where it is usually wind-scoured, and the heaviness of the snow — it is just so wet; it is really unusual up there,” Teague said. “ … It is quite the sight.”

Besides the deep snowpack, additional work has been required to clean up numerous winter slides that buried the roadway in avalanche debris that’s littered with boulders and snapped trees. According to Trulove, there is even more snow on the east side of the pass, with one slide path burying the road some 40 feet deep.

Avalanche danger remains a pressing concern, especially as temperatures warm and the deep, heavy snowpack referenced by Teague starts to move. She noted that slide paths on the left-hand side (for those traveling up the pass) just before the upper Lost Man trailhead that normally slide still have yet to run.

CDOT crews, with the assistance of Colorado Avalanche Information Center experts, will conduct avalanche mitigation using explosive charges dropped from a helicopter on May 22. That is the day before the normal targeted opening. If those mitigation efforts, on more than a dozen known slide paths, produce more avalanches that run to the road, CDOT’s job could take longer. Conversely, a long stretch of sunshine and above-average temperatures could hasten the work.

“They are making incredible progress cutting through the snow and getting the road clear, but some of the slopes still need some attention,” Teague said.

Trulove noted that once the pass does open, crews will be on the lookout for collapsing snowbanks. With snowbank walls topping 15 feet in some stretches, warming temperatures can cause the banks to fall onto the road.

“It will be an interesting season on the pass,” Trulove said.

Erik Skarvan of Aspen, a local cycling enthusiast, was excited to hear that one of the continent’s iconic roadways, which tops out at 12,095 feet above sea level, will see more car-free time this season. Skarvan has climbed up the pass on his road bike about 10 times over the past three to four weeks, he said, pushing farther with each ride and reaching the lower Lost Man trailhead on Saturday.

He noted that the road last weekend was reportedly clear past the Independence ghost town and many cyclists were taking advantage.

“As others have been saying, this is historic,” Skarvan said of this winter’s snowpack and avalanche activity. Some of the trees destroyed in the March cycle that produced the largest natural avalanches were at least 100 years old, meaning it had been at least that long since slides that powerful had ran in the given slide paths.

After all the epic powder days, “there are a lot of implications you are starting to see unfold,” he said.

A debris field that came down from Green Mountain, just past the Braille Trail pullout, has been cleared from the road, but the trees and rocks mixed in with the remnants are exposed in the snowbank, Skarvan said.

The boulders that have fallen onto the road as temperatures warm have also caught Skarvan’s eye on his rides. He said he has been hugging the right side of the road while keeping an eye on the slopes to the left to watch for falling rock. He has observed the rocks collected into piles by CDOT crews for removal, particularly in the few hundred yards beyond the closure gate.

“CDOT should get huge love for all the extra work they are having to do,” he said. Same applies to the U.S. Forest Service and other entities dealing with the post-winter cleanup. The work can be costly, difficult and dangerous, Skarvan noted.

The Independence Pass Foundation’s primary fundraiser, Ride for the Pass, is on for Saturday. The ride takes advantage of the still-closed road with cleared conditions to Independence ghost town, a 10-mile, 2,300-vertical foot climb. The ride starts at the winter closure gate, 5 miles east of Aspen, at 10 a.m., and registration is $45 for individuals and $75 for families. Register online at http://www.independencepass.org/ride-for-the-pass or stop by the Limelight hotel between 10 a.m. and 7 p.m. on Friday.

Same-day registration is available at the start on Saturday but costs $5 more, and riders must be signed up by 9 a.m. if they want to be timed.

“The road is totally clear and beautiful all the way to the ghost town, and there is no avalanche danger anywhere in that stretch,” Teague said. “It is a beautiful time to ride the road — the snow and the mountains are pretty glorious.”

The forecast is calling for falling temperatures and the chance of snow and rain over the weekend. Teague noted that participants in the ride can send a bag of warm clothes up to the top of the course. That way, they can enjoy the warmth provided by cardiovascular exercise on the way up, with extra layers waiting at the top to stay toasty on the way down.

A post-race party and raffle follows at 1 p.m. at the St. Regis.