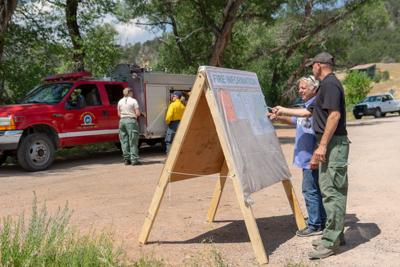 The Lake Christine Fire has grown to 11,459 acres, according to the incident report issued Sunday at 5 p.m.

According to the morning incident report on July 22: “The Lake Christine Fire moved into heavy, beetle-killed fuels Saturday and produced a very large smoke column. The fire has pushed predominantly to the north; creating new spot fires short distances ahead of the fire and establishing in thick stands of heavy mixed conifer.

“As the fire heads toward Cattle Creek, it is transitioning from thick timber fuels to aspen and Gambel oak. Firefighters used SEATs (single engine air tankers) to place eight loads of retardant around the cabins in these lighter fuels where it more effectively slows the fire’s growth. In addition to retardant, they have placed sprinklers and trimmed vegetation to protect the structures and provide more defensible space. These preparations will enable them to introduce fire to protect the structures if it becomes necessary.”

Other areas of the fire have not seen significant growth over the past few days.

Potential for flash flooding exists if a predicted storm produces significant rainfall, according to the report.