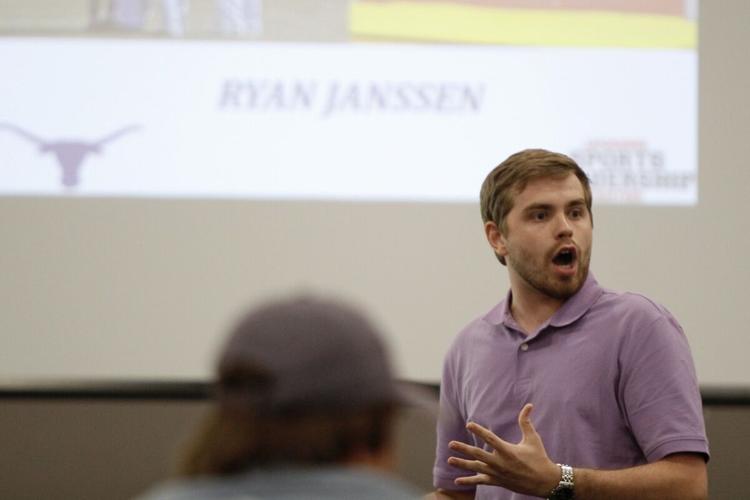 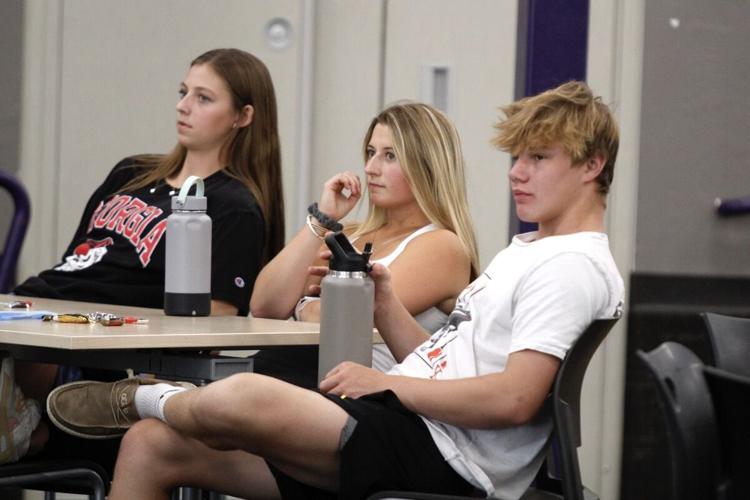 Ryan Janssen yelled at the student athletes to go while spritzing them with a water bottle — while their peers attempted to distract them and disrupt their progress. The task at hand was to find a number on a scrambled grid.

Janssen is a leadership facilitator for the Janssen Sports Leadership Academy, which works for major Division I athletics programs like University of Michigan and Louisiana State University. On Wednesday afternoon, he was in front of around 20 Basalt High School students in the commons area of the school, helping to develop leaders across the BHS varsity sports programs.

“As important as it is to practice your physical abilities, it’s just as important … to practice how you’re communicating with your own teammates and coaches,” Janssen said. “So what we’re trying to do is develop how you can be better leaders and make it a little bit more quantifiable.”

BHS Athletic Director Jason Santo first heard about Janssen during a conference in the spring. He saw a presentation from Janssen’s father, Jeff Janssen, the leader of the company and generally the one working with the higher-end clientele. Ryan, however, lives in Denver — his father is based in Raleigh, North Carolina — and, with a smaller portfolio, he’s proved to be a more affordable, accessible option.

So Santo, who has already invested in a new weight room and the Western Slope’s first prep football video board since being hired in 2019, spent between $3,000 and $5,000 on a summit featuring Janssen and copies of the elder Janssen’s book, “The Team Captain’s Leadership Manual.” Santo is hoping to get his students to engage with learning about leadership well into the semester and beyond. He said the school will be hosting study sessions covering chapters of the book and talking with students about leadership going forward.

“We’re going to keep doing this until [they] understand and get what leadership is,” Santo said. “It’s not just sports. It’s our whole building culture — which is strong, getting stronger — that we just want to keep growing. We have so many young kids who need this.”

Janssen spoke to the players and then the coaches separately, giving the same basic presentation with some tweaks. The coaches, for example, were not sprayed with water bottles.

He spoke of how it is easy to lead in good times and be encouraging, but how teammates often struggle to be critical of each other and come down on each other when need be. The water-spraying exercise was meant to demonstrate that.

He gave the example of University of Arizona freshman walk-on Josh Pastner, who was essential to the Wildcats’ basketball state championship in 1997 despite playing very few minutes. Pastner is now the head coach at Georgia Tech. Santo introduced the presentation with discussion on legendary football player Tom Brady and the high school standout he beat out for the University of Michigan starting job based not on performance but leadership.

Santo initially asked coaches to select players they wanted to appear at the summit. He then hand picked additional names to invite. The invitees spread across all four classes and the majority of the school’s sports. About 40 RSVPs were received, but during the final weeks of summer break, enticing students was a tough prospect. Janssen opened by asking how many people wanted to be there. Three raised their hands.

But he found as the presentation went on, the students became more engaged and open minded to the subject matter.

“I think it’s very beneficial because a lot of people overlook high school sports as more like a social gathering than an actual competitive team with determination and stuff like that,” Basalt volleyball player Karsyn Dombrowski said. “I think if we can have like 20 of us on the same board, I feel like we can have more of a competitive environment that actually wants to win.”

Dombrowski added that the ability to lead a team will not only make the team better but improve her chances of playing at the college level, which she hopes to do.

Still, she admitted that she probably wouldn’t have attended if she weren’t Santo’s teacher’s assistant and her parents being adamant about her going.

The school is looking at future speakers on leadership and keeping the discussion going beyond the one-hour summit from Janssen. Competitions begin for varsity sports in a couple weeks with, Santo hopes, a new outlook on being competitors and leaders on their teams and in day-to-day life.

“We’ve seen growth in all of our programs, our coaches have done an amazing job,” Santo said. “But we have three coaches that have been here longer than me. The time was here to say, ‘It’s yours. How do you want to build your program?’”