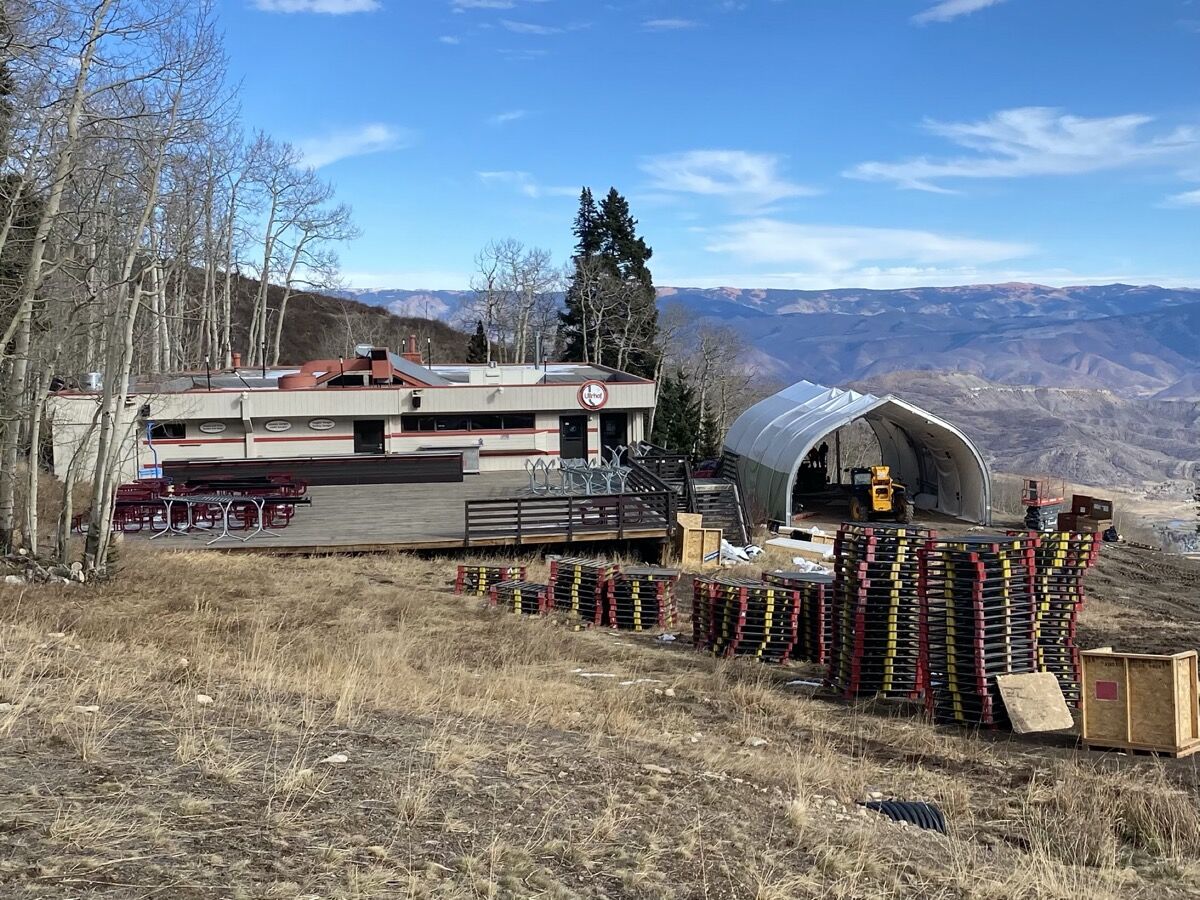 The Ullrhof restaurant at the Big Burn chair lift boasts a new tent to accommodate heated outdoor seating amid a winter season during a pandemic. 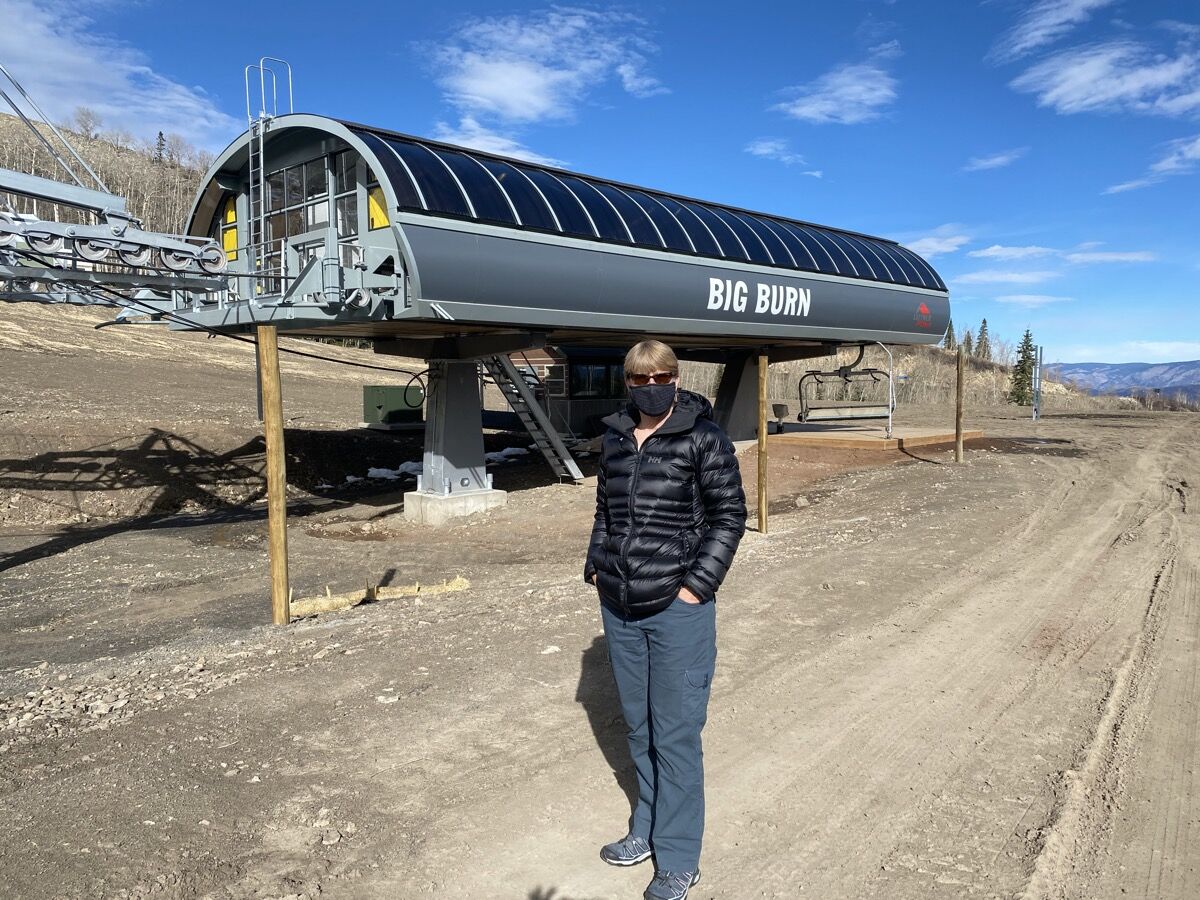 The Ullrhof restaurant at the Big Burn chair lift boasts a new tent to accommodate heated outdoor seating amid a winter season during a pandemic.

On one of those namesake Colorado bluebird days, Snowmass Mountain Manager Susan Cross braves the mud from the gate at the end of Wood Road, pointing her vehicle up the ski area toward the Big Burn.

Cross has been in her current role for a little less than two years, working with former Manager Steve Sewell for part of one season before leading the charge on her own in last year’s 2019/2020 abbreviated ski season. She has enjoyed her tenure back in Snowmass — where she worked in guest services before taking over as mountain manager at Buttermilk — and is eagerly looking forward to this season, even with the anticipated restrictions.

We were wheeling up the mountain to see Snowmass’ newest lift, the Big Burn chair: a detachable high-speed, six-passenger replacement put in place over the last five months by a team from Leitner-Poma, Aspen Skiing Co.’s longtime lift builder.

“This is new, direct-drive technology,” explained Cross, as she pulled to a stop just up the hill from the new Big Burn base area. “It’s much quieter, and there’s no gearbox like there was in the old lifts. We’ve got 89 chairs, which is fewer than the old lift, but more capacity on each chair. And it is about a seven- to eight-minute ride to the top.”

The old Big Burn was Snowmass’ workhorse lift, distributing skiers and riders across the main face of the ski area and feeding access to both Sam’s Knob and the High Alpine areas on the mountain. The hauling rope, or the main lift feature that pulls the chairs up the mountain, had repeatedly failed on the old Big Burn lift. So after 33 years in operation, SkiCo made the decision to replace it this summer.

The $10.8 million new Big Burn lift follows the same alignment as the old one and terminates in the same spot, at the top of the Burn at 11,835 feet. The new base of the Big Burn starts about 200 feet higher up the hill and is more adjacent to the Ullrhof restaurant than the old lift. This ski season, a heated, lighted tent outside the Ullrhof safely socially distances and seats 50.

The larger lift chairs are more widely spread out along the lift cables, so mountain enthusiasts will have more time this year — about 10 seconds — to load onto the lift. The six-person chair requires more decking space at the base and a little more staff, much like the Village Express chair in Base Village. The lift attendants’ shack remains the same.

There is some new grading of the landscape to make the angling access to the lift easier from the Ullrhof and for skiers and riders to cross down across the trestle to Sheer Bliss.

Looking uphill between the Whispering Jesse and Timberline ski runs, the long lift line of cables and chairs that bisects the mountain glistens in the sun. The cables run 7,639 feet from the base of the lift to the top.

“We have 21 towers, which is fewer than the 27 before, so they are more spread out,” Cross said.

She described how all 21 of the towers were flown in by helicopter from the staging area lower on the mountain and properly positioned by a team on the ground in one long day. The feat required 95 trips by the helicopter and precision timing and work by the team on the ground.

While SkiCo will not have its usual complement of young international workers this ski season, they have had a successful year in recruiting their seasonal work staff.

“The number of applications is way up, so people are looking for jobs,” Cross said. “And we still have jobs to offer, but now it comes down the housing. We have filled our beds.”

Cross pointed out on the chair where a detachable bubble would be attached. There was some discussion during the planning stages for the lift to include retractable clear bubbles on each chair, for warmth, that passengers could either place up or down. But the current situation with the COVID-19 pandemic altered the timing of that decision.

The number of skiers and riders that grace the slopes will not determine the success of this ski season, officials have emphasized. This year, the main goal may be just to stay open, given the challenges of keeping patrons and staff healthy.

The focus, even upon arrival, will be on keeping people healthy at any of the local ski areas this season. Masks and proper social distancing will be politely required of everyone.

“We are prepping for a normal winter, but with all the restrictions added on top,” Cross said. “If summer is any indication, we are going to be busy this winter as well. Some of the responsibility is going to be on the ­individual. We will have signage in the lift lines. And instead of the six-pack having enough space for six people, maybe we’ll only have three or four.”

Restaurants will be another area of prime concern this winter. There will be limits on the number of people seated, and people will not be able to congregate as they normally would during a busy lunch time. Rather, diners will find tents outside the Ullrhof, High Alpine and Elk Camp restaurants to boost seating capacities.

In short, it will be a season that is a work in progress. If something doesn’t work, SkiCo is prepared to adapt and change it, having looked at other ski resorts — such as in Australia — for what has worked and what hasn’t.

At this point, SkiCo continues moving forward as planned, and they have not stopped or abandoned any of their current planned capitol construction projects, according to Jeff Hanle, vice president of communications.

Now, all the economy and sport need are cooler temperatures. As Cross drove down the mountain, she pointed out the snow guns that are ready as soon the temperatures drop enough to make snow.

Everyone is eagerly waiting on Mother Nature, just like any other normal November.