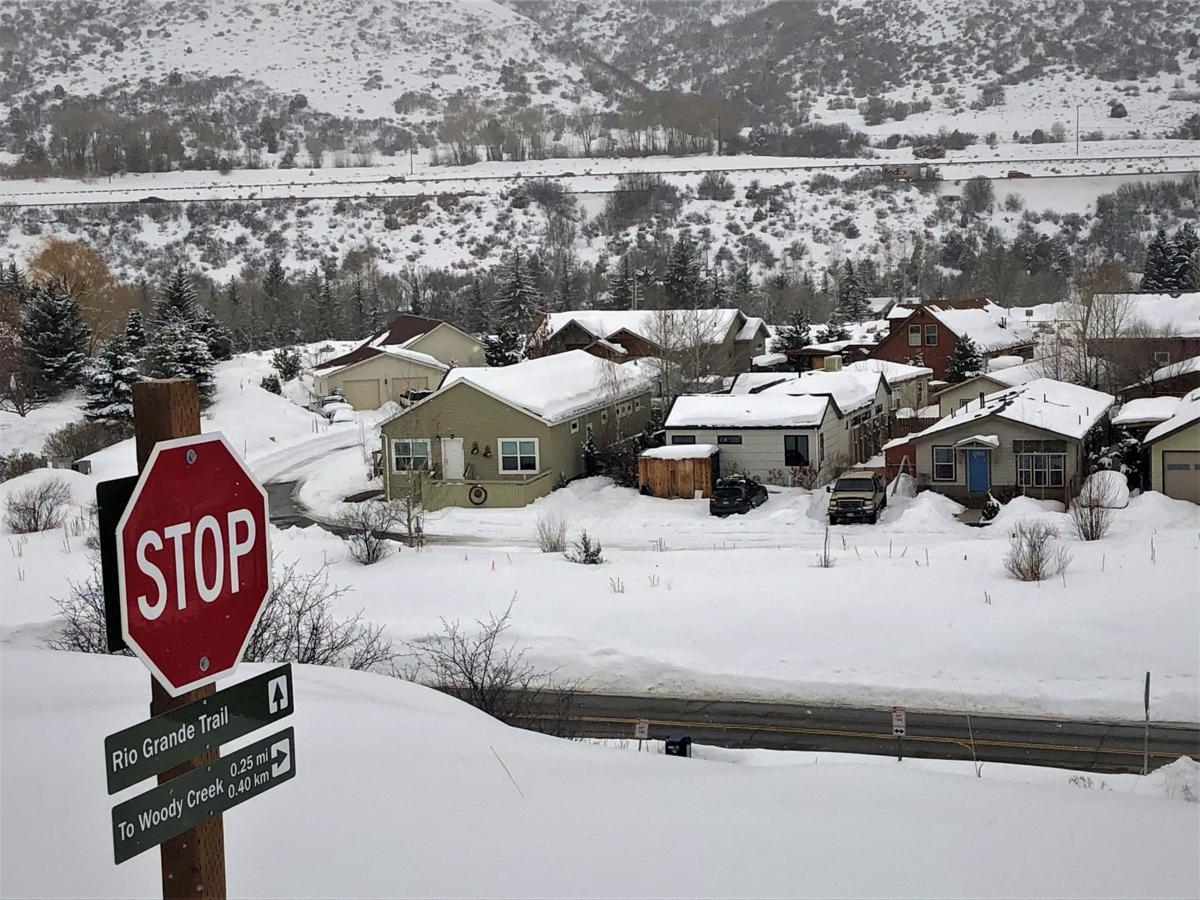 The Woody Creek community lies under a flight path for the Aspen-Pitkin County Airport. Woody Creek resident Bill Dinsmoor has formed a nonprofit, Save Our Skies, for the purpose of providing information about the impacts that airport expansion would bring. 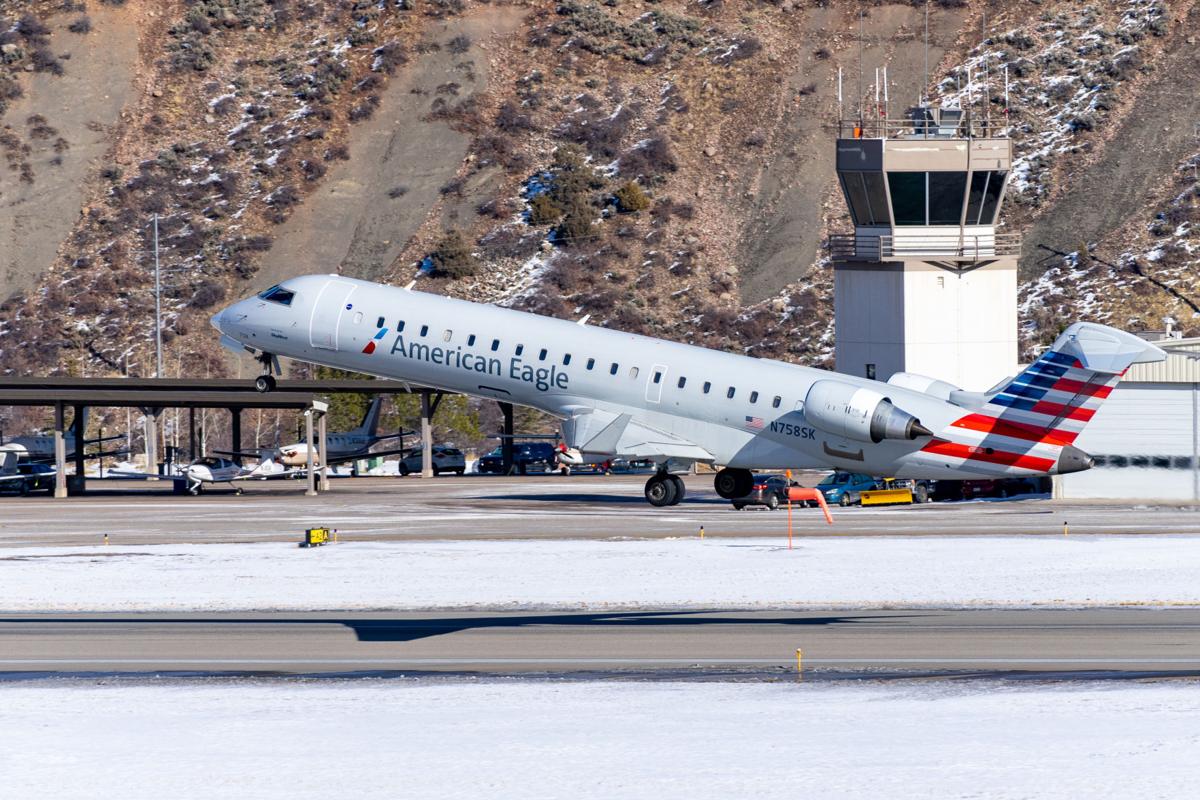 An American Eagle commercial jet takes off from the Aspen-Pitkin County Airport in this file photograph from early December. Commercial airlines serving Aspen primarily utilize the CRJ-700, which many airport-expansion supporters contend will be phased out in the next two to 15 years.

A nonprofit group has been formed under the stated mission of providing “fact-based information to the public” about the ramifications of a larger Aspen-Pitkin County Airport.

Save Our Skies was incorporated in July and lists its registered agent as Bill Dinsmoor of Woody Creek. Dinsmoor serves on its board, which also includes Wayne Ethridge and Phil Holstein, also of Woody Creek, and Ellen Anderson, of Aspen Village. Dinsmoor chairs the Woody Creek Caucus.

All four Save Our Skies board members served last year on the ASE Vision process, an initiative by the county to obtain community input on the potential redevelopment of the airport, which may include a wider runway and a larger terminal. After participating in various subcommittees within the process, they still take issue with the basic impetus driving the airport expansion discussion: that the CRJ-700 aircraft employed by the three major commercial carriers serving Aspen will be retired sooner rather than later, and a runway widening is necessary to accommodate next-generation jets with a larger wingspan.

Matt Moseley, partner and chief strategy officer for Denver-based communications firm Dovetail Solutions, confirmed Monday that he has been talking with the nonprofit about helping with their messaging. Moseley, who works out of Boulder, provided communications services for the Washington, D.C.-based nonprofit American Rivers when the organization got involved in the debate over the city’s proposal to develop a hydroelectric power facility using stream flow from Castle and Maroon creeks. In a November 2012 advisory vote, local residents narrowly shot down the proposal. American Rivers, and Moseley, were viewed as effective forces for the opposition.

“They have reached out to me and we are in some discussions about working together,” Moseley said. “It all depends on where this thing goes. There are some people who are really concerned about expanding the runway. We’re talking about working together and what that would mean within the various dynamics.”

The ASE Vision process got underway in early 2019 with the creation of four subcommittees and an overarching committee, the ASE Vision Committee, which will make final recommendations on airport redevelopment to the Board of County Commissioners. The subcommittee work was completed in December and the Vision Committee has been meeting since January. Pitkin County Manager Jon Peacock said he expects the Vision Committee to meet three or four more times, once a week, before handing off its suggestions to county commissioners.

In a recent print advertisement, Save Our Skies outlines its basic issues with the process. The nonprofit claims that the Technical Working Group, the subcommittee that examined issues pertaining to airside improvements, “was skewed favorably toward an aggressive approach to airside and runway development.” Aside from its contention that appointments to the technical committee ensured that the deck would be stacked in favor of airport expansion, the nonprofit also has concerns about the effects a larger airport, and presumably larger planes, would have on community safety, noise, pollution, traffic and growth.

The technical group recommended that the local airport should become a full-fledged Aircraft Design Group III facility, but to achieve that the runway would need to be widened in order to accommodate aircraft with a wingspan of 118 feet or less. One current condition on the airport is a restriction on aircraft with a wingspan greater than 95 feet. Supporters of airport expansion say most next-generation aircraft, which will be quieter and more fuel-efficient than the CRJ-700, will have a larger wingspan than that which is currently allowed. Critics say that planes are being developed that would fit under the current wingspan limitation, and that the county should focus on terminal improvements in lieu of the airside expansion.

“We are currently well-served by the CRJ-700 aircraft, which has provided the community with reliable, safe and frequent flights since 2006, and will be in service into the late 2030s,” the advertisement from Save Our Skies states. While some expansion critics believe the airlines will keep using the CRJ-700 through 2039, supporters believe the aircraft will be completely phased out over the next two to 15 years.

It has been pointed out numerous times during the process that airlines, not local governments or communities, make the decisions on what type of aircraft to fly into a facility. But Save Our Skies fears that runway expansion will mean larger and noisier jets with a carrying capacity that may double the number of passenger seats contained within the CRJ-700 (around 70).

“With the large runway, the FAA requires the airport provide access to all aircraft with a wingspan of 118 feet or less and which could have more than twice the noise impact of the CRJ-700,” the ad states. “Some of these aircraft could include the Boeing 737-700, 737-800, 737-7MAX, 737-8MAX and the Airbus A320 NEO. We believe there is a strong likelihood that aircraft operations and planes will increase as a result of widening and strengthening the runway.”

Ethridge said Sunday that the emergence of Save Our Skies and the recent advertisement are timed to coincide with the ASE Vision Committee’s last few meetings and a recommendation to the BOCC. SOS is looking to play a strong role in the effort to keep the airside expansion from happening.

“We waited until after the first of January, when our appointments on the [subcommittees] were completed, to announce that there was an alternative organization to what was being proposed by the county consultants and numerous development interests,” Ethridge said.

Peacock had little comment Monday about the formation of Save Our Skies. He said the county remains committed to the ASE Vision process in which more than 120 area residents initially participated.

As the months passed last year and numerous meetings were held, participation dwindled, but all four subcommittees issued majority recommendations to be passed along to the Vision Committee, along with minority reports. There was general consensus that a newer, larger or improved terminal building is necessary to serve the future needs of visitors and locals alike.

“These citizens who served on the [subcommittees] represent a pretty good cross-section of the community, and different views,” Peacock said. “My energy is really on helping this citizen group finish their work and their deliberations on data, information and values. The Vision Committee has been working with a pretty consistent set of values that were agreed upon pretty early in this process about what is an acceptable level of growth.

“I don’t know what the SOS group wants to add to that,” he said.