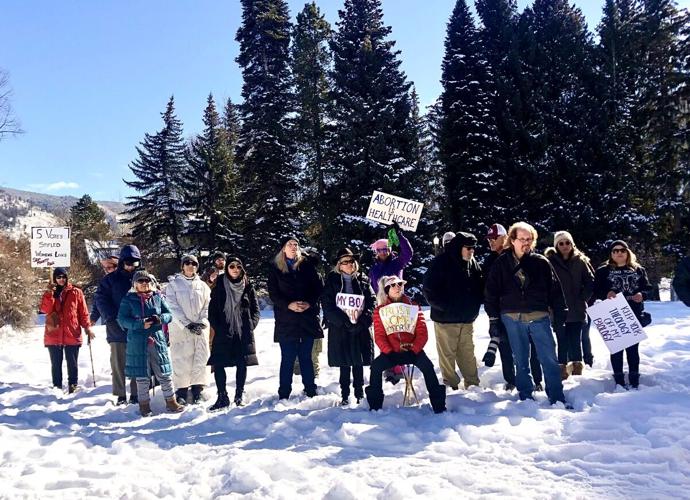 Advocates for women’s rights listen to speakers at Paepcke Park on Sunday. A march and rally was held on the 50th anniversary of Roe v. Wade. 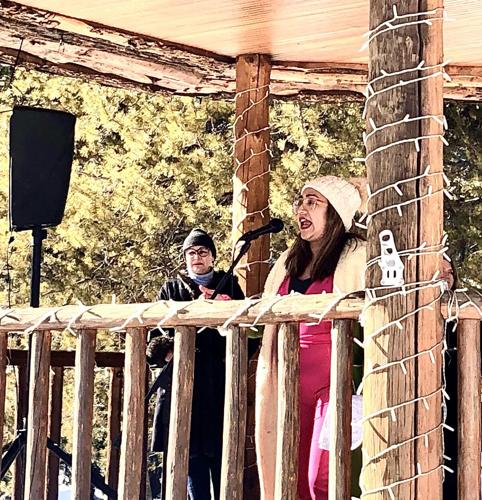 Attorney Elizabeth Granado speaks from the gazebo at Paepcke Park during Sunday’s march and rally to recognize women’s rights.

Advocates for women’s rights listen to speakers at Paepcke Park on Sunday. A march and rally was held on the 50th anniversary of Roe v. Wade.

Attorney Elizabeth Granado speaks from the gazebo at Paepcke Park during Sunday’s march and rally to recognize women’s rights.

The messages from Paepcke Park’s gazebo were loud and clear: Women cannot afford to back down when it comes to advocating for their rights — even the ones they have lost.

Most speakers’ comments during Sunday’s Women’s March and Rally, which was organized by Betty Wallach, administrative vice chair of the Pitkin County Democratic Party, focused on the U.S. Supreme Court’s June overturning of Roe v. Wade, the landmark SCOTUS decision that made a woman’s access to abortion a federal right. Roe v. Wade’s 50th anniversary was Sunday.

“We have to stop what is happening right now,” said Elizabeth Granado, an attorney in Fruita who formerly served as Pitkin County’s elections manager. “It is a snowball effect that’s turning into an avalanche that is wiping out all of our fundamental human rights. We have this crazy decision coming down from the Supreme Court, which as an attorney, infuriates me, because their logic just does not make sense.”

Granado, who is licensed to practice law in three states, also spoke to the gathered crowd of around 50 people about her personal experiences in which she has faced harassment.

She said that when she was 26 and working in her first professional job, a co-worker much larger than her blocked her from exiting an office door and hovered over her.

“I was a young attorney and had no idea how to respond. I told the supervisor, OK, let’s all sit down and have a talk. (I said) that is harassment. You do not do that.

“There are a lot of things, and I am just tired,” Granado continued. “I am infuriated. My little boy comes home. I surround him with strong females and strong males. He comes home and says, ‘Well, mommy, girls can’t drive Jeeps, girls can’t drive trucks.’ (I ask) ‘where are you getting this from?’ It’s coming from what he sees. …He recognizes advertisements. He understands what’s happening on the radio and in the news. And how am I to raise him to understand that we — yes, females — can do anything that a male can do and even more, because we can have a little baby.”

A former prosecutor, Granado spoke of sexual assaults and other crimes against women and how it is often difficult to get police to make an arrest.

“And even though we have these laws, they aren’t followed through,” she said. “We have laws where it’s a mandatory arrest when there’s a protection order violation. But officers are not arresting; they’re not doing their job. They’re not keeping females safe.”

When her turn came on the mic, Aspen Councilwoman Rachel Richards called the gathering “a really important event.”

“We’re just part of what hundreds of thousands of women are doing (today) across the country to mark this important occasion,” she said.

Richards continued, “We all know the outcomes and what’s at stake for women who do not have bodily autonomy and cannot make the choices they need to at the right time in their life. This forced-birth doctrine that so many seem to have affects grandparents, affects children who are already in the family. It affects spouses, it affects workplaces, it affects co-workers when one woman cannot access the health care that has been available to her for the last 50 years.

Other speakers included, but were not limited to, Amanda Carlson, director of the Cobalt Abortion Fund, and Danielle Madril, a former Aspen Police Department detective who now works in the family violence unit of the Denver District Attorney’s Office.