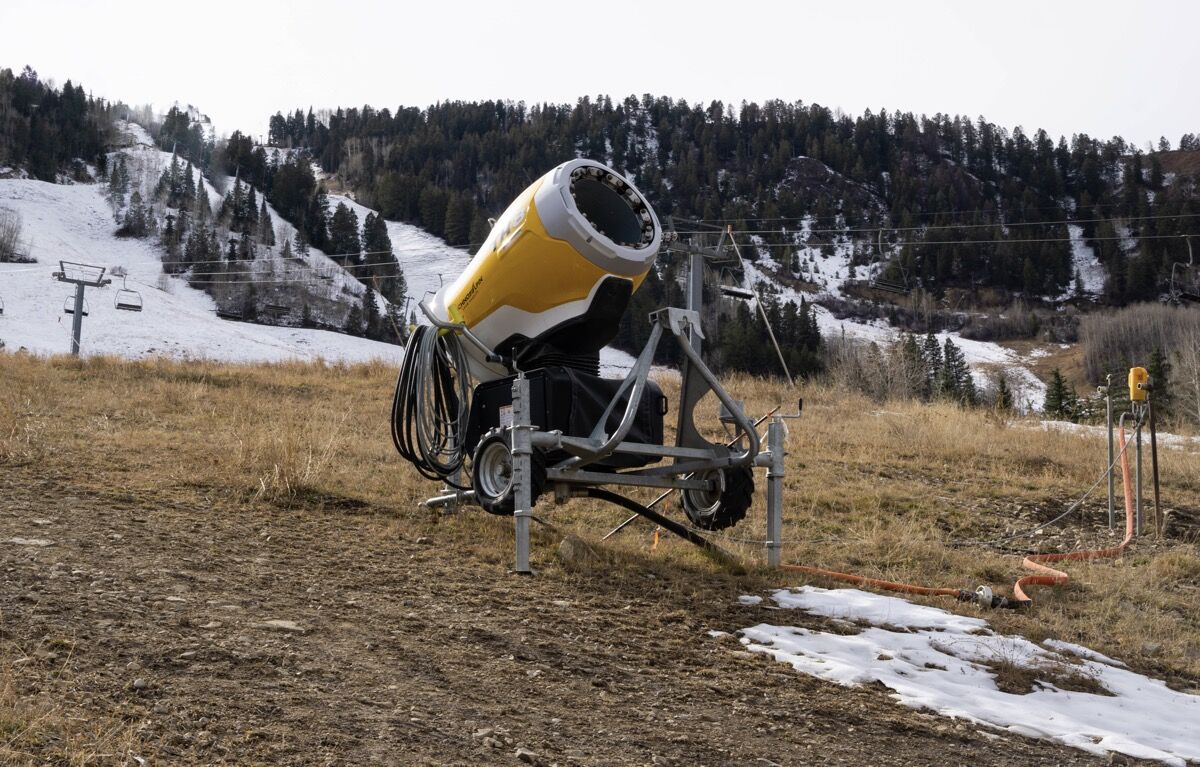 A snow cannon on the lower part of Aspen Mountain sits inactive on Tuesday afternoon amid temperatures too warm for efficient snowmaking production. Aspen Skiing Co. officials will meet this weekend to determine their plans for Opening Day. 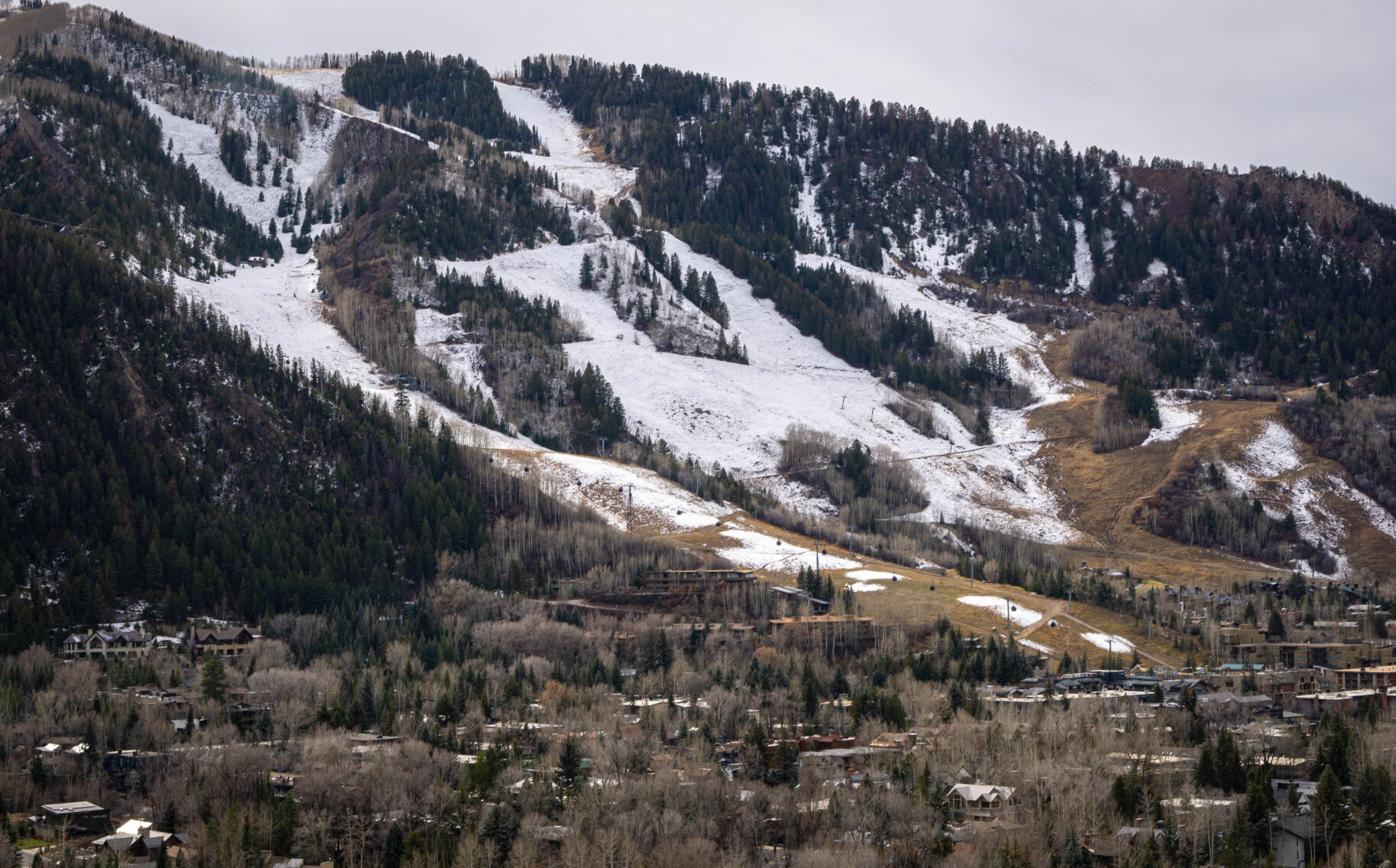 Snow coverage on the lower sections of Aspen Mountain is sparse, as evidenced by this look at Ajax on Tuesday afternoon.

A snow cannon on the lower part of Aspen Mountain sits inactive on Tuesday afternoon amid temperatures too warm for efficient snowmaking production. Aspen Skiing Co. officials will meet this weekend to determine their plans for Opening Day.

Snow coverage on the lower sections of Aspen Mountain is sparse, as evidenced by this look at Ajax on Tuesday afternoon.

A public announcement will likely be issued on Monday morning, he continued. For now, the traditional Thanksgiving Day start to the season is still in the plans for Aspen Mountain and Snowmass Ski Area, despite a lack of recent natural snowfall and less-than-ideal temperatures for snowmaking, at least prior to this week’s upper-valley nighttime temperature drop.

The resorts at Telluride and Steamboat Springs already decided earlier this week to delay their ­scheduled openings due to lack of snowfall and warm temperatures not conducive to blowing snow. However, other resorts around the state have already opened with limited terrain, including Vail, Wolf Creek, Arapahoe Basin, Loveland, Keystone and Breckenridge. As of press time, Eldora was scheduled to open today.

“I don’t have anything remotely to share,” Hanle said. “We discuss it every single year [just before Opening Day]. We get dealt the hand that’s dealt, and then we see how much snow can get made and how much natural snow we have — and then we come up with an announcement of what’s going to be open.

“Some years, it’s a lot easier,” Hanle said with regard to making decisions about Opening Day and the amount of terrain that will be available.

He acknowledged that Mother Nature hasn’t been cooperating in recent weeks in terms of natural snowfall or snowmaking temperatures. At 3 p.m. Thursday afternoon, he noted that the temperature atop Ajax was a mild 40 degrees Fahrenheit. The upper-mountain snow stake showed 9 inches of natural snow, “which is not indicative of whatever snowmaking we have done,” Hanle said.

Using different high-tech forecasting models, Jeff Colton, a meteorologist with the National Weather Service’s office in Grand Junction, said he does not see any significant snow storms moving into the area through the next 10 days. Though the potential exists for a minor system to hit the area from the southwest on Tuesday or Wednesday, he noted.

Low temperatures in the Aspen-Snowmass area should fall below 20 degrees at the ski areas over the next week, which is conducive for snowmaking, Colton said. Daytime highs will hover in the mid- to upper 30s.

While the weather overall has been mild in recent weeks, the nighttime lows have been dropping since midweek, signaling a shift toward normal seasonal temperatures, Colton said.

In December, the La Niña weather pattern — which often leads to better natural snow production — is likely to push into northwestern Colorado, he said. The NWS Climate Prediction Center in Washington, D.C., says 27.5 inches of snow is normal in December for Aspen, as measured at the airport.

There’s a 67% chance that snowfall next month will be either normal or above normal, according to the center. But that may depend on whether La Niña makes herself known.

Aspen-Snowmass is not a major destination for air travelers on Thanksgiving weekend, said consultant Bill Tomcich, a community liaison to the commercial airlines serving the Aspen-Pitkin County Airport. The number of people leaving the community during the holiday is about even with arriving passengers, at least in terms of commercial flight loads.

In fact, ASE schedules are now at their fall low point, Tomcich noted in an email summary to local stakeholders. Through Nov. 30, United Airlines has scheduled 35 flights per week, with four flights daily from Denver and one flight daily from Los Angeles. American Airlines has scheduled nine flights per week, which represents service from Dallas-Fort Worth either once a day or twice a day.

The airlines’ combined low number of daily flights (six or seven daily) continues through Dec. 15. On Dec. 16, business picks up dramatically with a combined 33-37 daily flights through Jan. 3.

Tomcich said he has observed over the years that while good snow conditions don’t drive air travel to Aspen on Thanksgiving weekend, an unexpected powder day often lures visitors by car from the Front Range.