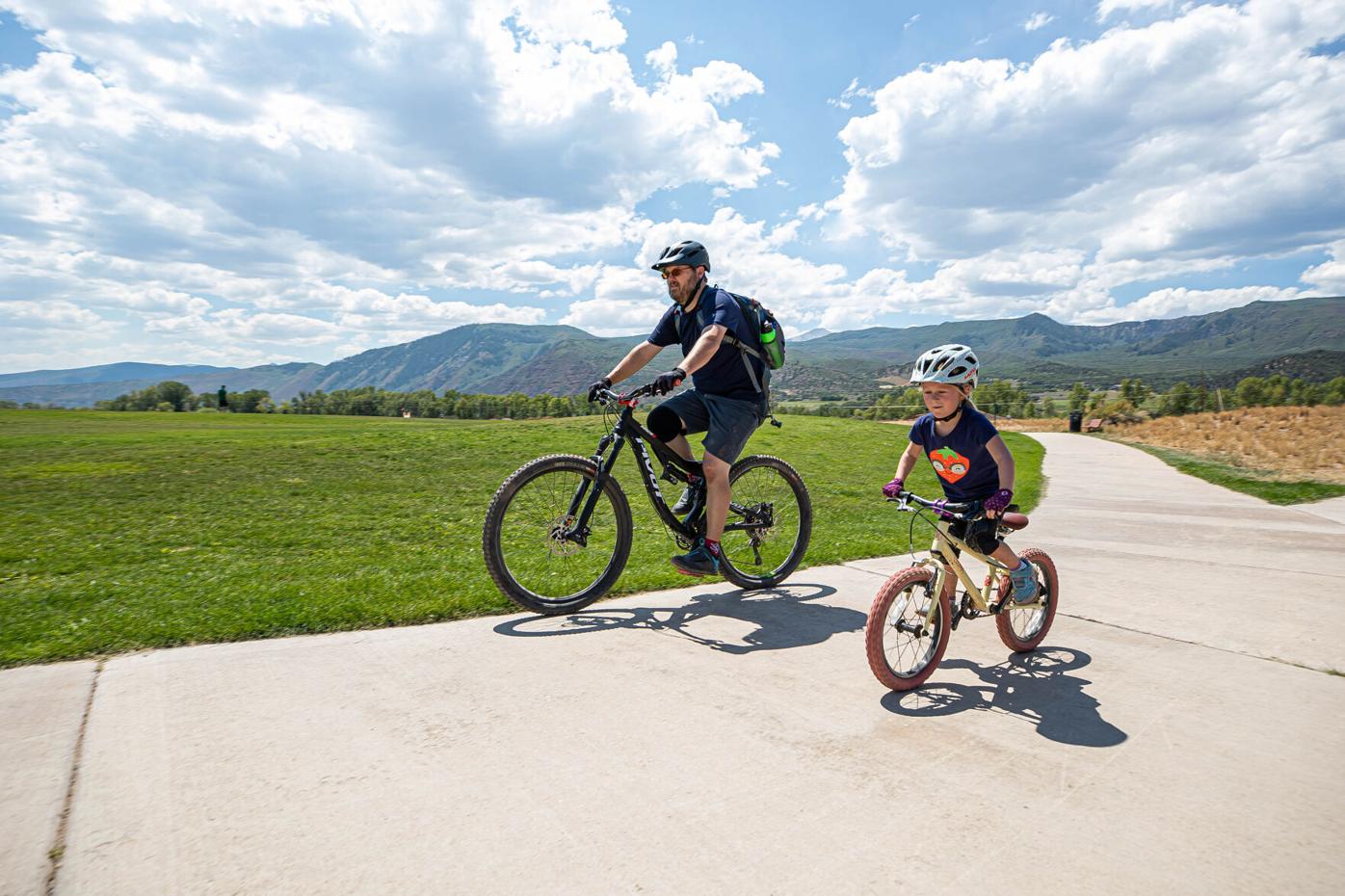 Jason Berghauer bikes with his daughter, Amber, 5, around Crown Mountain Park in El Jebel on Aug. 10. Outdoor activities may raise spirits but overcrowding on popular trails can also be a stressor. 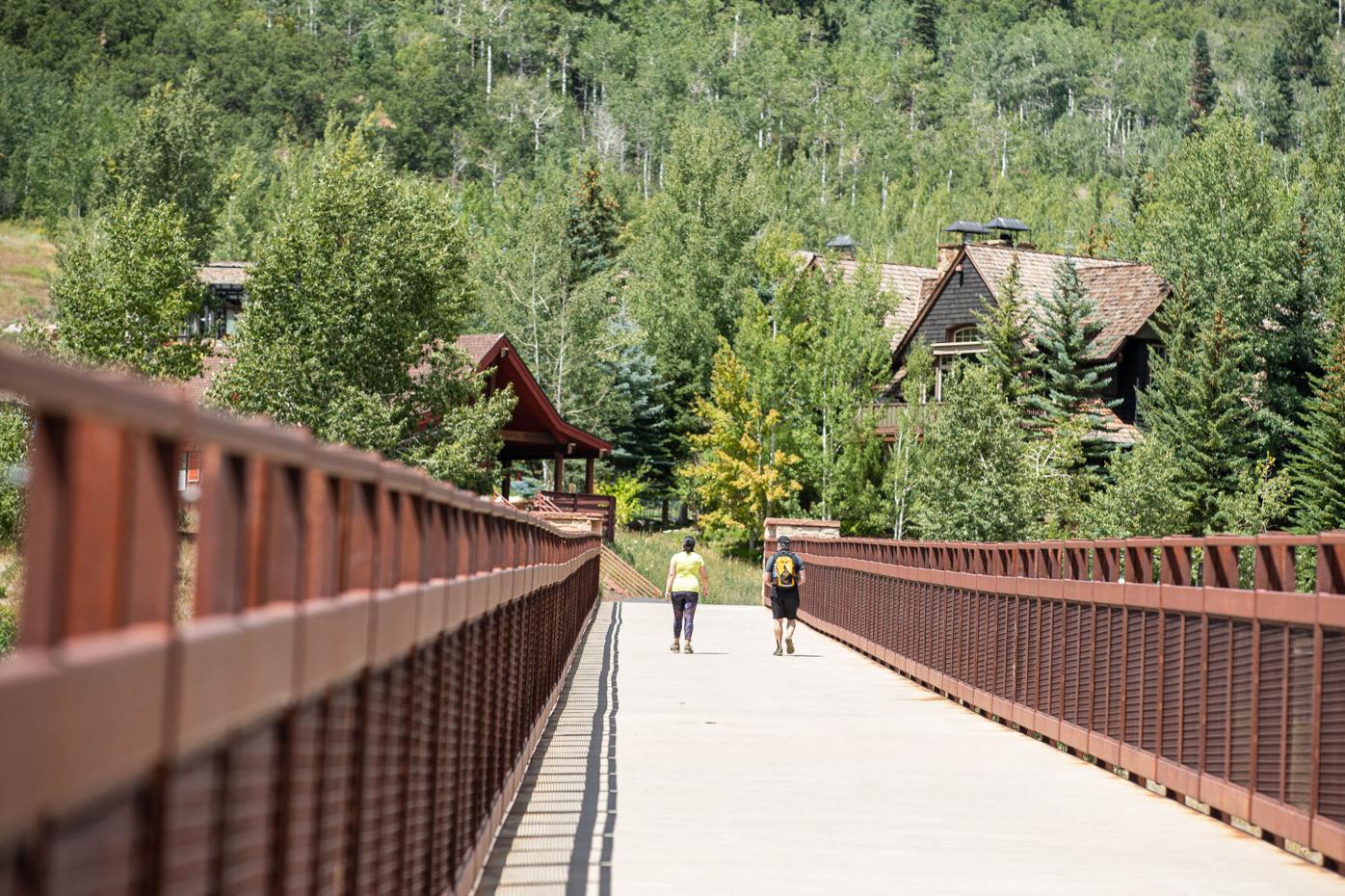 Residents may be experiencing grief for lost interactions and community relationships due to distancing requirements and limited gathering opportunities from the pandemic, which is now in its sixth month.

Jason Berghauer bikes with his daughter, Amber, 5, around Crown Mountain Park in El Jebel on Aug. 10. Outdoor activities may raise spirits but overcrowding on popular trails can also be a stressor.

Residents may be experiencing grief for lost interactions and community relationships due to distancing requirements and limited gathering opportunities from the pandemic, which is now in its sixth month.

Editor’s note: The following is the first in a series of stories the Aspen Daily News will present on mental health.

We are now six months out from March emergency orders that shut down the ski resort, mandated business closures and asked visitors to leave Aspen. In the last few weeks multiple fires have ignited in the valley, Grizzly Creek Fire which has blocked access to I-70 and the eastern part of the state. For a few days in early August, Independence Pass also closed, tying off the valley into a hot, smoky, crowded knot.

“I have noticed in the last few weeks unfortunately seeing more confrontational behavior, whether on the trails or in the grocery store,” said Aspen City Council member Ann Mullins in a July meeting. “This is a really, really stressful time. Particularly the unknowns. What’s going to happen? Is it going to get worse?”

Aspen Mayor Torre has made a point to open and conclude meetings acknowledging the toll this rough year is having on the public, often using the phrase, “We are all in this together.”

Speaking this week, he said the compounding local stressors are affecting everybody.

“People are under a lot of stress. We are really starting to see that manifest itself in how people are able to get through their day-to-day, and how well they are able to keep their cool and keep it together and people are cracking a little bit. I think that goes for everybody. I put myself in that boat,” Torre said.

Mullins encouraged everybody to check in on others, and attempt additional patience in public.

“Be very aware of what’s going on around you. It’s the ultimate social experiment of keeping us all sane during this pandemic,” she said.

Mullins suggested taking advantage of the wilderness options accessible all around ­Aspen, a common solace for those who call the valley home.

Though even that option is becoming another source of stress for some.

“You’ve got a lot of congestion on trails and recreational amenities that are traditionally a place of sanctuary and to get away from people,” Torre said. “This year, as we’ve seen a trend over several years, it’s been very crowded on the trails. You’ve got more interaction, and in some cases that turns to confrontation and conflict.”

But even without the overcrowding, the outdoors have become increasingly off limits. Beginning last week, the smoke from the Grizzly Creek Fire has reached unsafe levels according to the Colorado Department of Public Health and Environment. CDPHE has released daily smoke advisories encouraging people to remain indoors as much as possible.

Aspen City Manager Sara Ott said the fires took a toll on top of the stress of the pandemic, to be worried about the health, safety and property risks from the natural disaster, as well as the economic impact for businesses relying on traffic from I-70 to bring in goods and customers.

“Last week when the fire broke out obviously stress was through the roof,” she said. “Dealing with Independence Pass had ripple effects on everyone in town.”

Ott has also spoken publicly about the increasing amount of anecdotal reports that town is reaching a boiling point. She wants a public message that it’s OK to not be OK, to reduce any stigma for those trying to deal with pressure on their own.

“We’ve got a lot of people whose worlds have been turned upside down this year.

Really all of us have experienced some level of it. It’s important that we come together as a community to get through it,” Ott said.

Though Aspen’s businesses are experiencing a better season than was anticipated at the height of quarantine, social distancing requirements are still keeping group sizes small, community gathering spots closed and nightlife banned.

“I think that everybody is really feeling some of the effects of what a six-month change in behavior has meant to us,” Torre said. “Aspen particularly is a very social place, a place where people come to relax and socialize and enjoy, and that’s been tough.”

He said the city is working on ways to bring the community together without creating a physical event that would violate public health orders or increase potential transmission of COVID-19.

Ott too said the town is undergoing grief for the lost interactions and community relationships due to distancing requirements and limited gathering opportunities.

“We are mourning it. We are social creatures. We are a social town,” she said.

“And it’s kind of hard when you have these big spikes of visitors and you see them being very social.”

In many ways the culture of Aspen has changed this summer as the population has shifted. Property managers are reporting that visitors are not interested in one-week stays this year, but instead have booked homes for the duration of the summer, adding new populations and new attitudes to the local mix.

Visitors are fleeing their urban residences, but not necessarily ditching the big city attitude.

“I’ve also noticed there has been added stress on our local workforce and our local business owners” Torre said.

He said businesses have taken most of the brunt of the confrontations with visitors who are unaware or unwilling to comply with local health regulations. All while working to make up for months of lost business and a forced reduction in customers.

“They have been dealing with new regulations and guidelines and making people follow them, as well as wearing a mask themselves when they are at work. I’m seeing the stress of what it is taking to run business also take its toll. I think people are literally losing sleep,” Torre said.

The contrast of the high strung visitor and the laid back local is not new for coronavirus. In fact the unofficial town motto “Relax, it’s Aspen” speaks directly to the change of pace experienced in the resort by the big city tourists.

This year’s influx and sustained nature of the visiting population make it harder to pass the chill pill to each new member of the community. But, Ott said, the hope is that over time the changing population doesn’t change Aspen’s small town character.

“As a community we have to appreciate that we are in a time of change. I don’t think we can force assimilation on new residents or on our guests, but we can certainly make basic requests that help hold true to our most core community values,” she said.

In a July city council meeting, councilmember Rachel Richards took time to acknowledge the town’s rising stress levels before a vote to implement the mandatory mask zone in downtown Aspen.

“It is a very stressful time and it’s very likely to last a lot longer. I don’t want to be the wet blanket on anyone’s optimism, but there is a real danger in the fatigue of the pandemic,” she said.

As it becomes apparent that COVID-19 really has created a new normal, people are exhausted.

The council passed a set of objectives to guide COVID-19 response and recovery spending this spring. The second goal on that list was to look out for the public’s mental hygiene. Some government funding has been passed along to area nonprofits and social services that focus on mental health through city funds given to the Aspen Community Foundation.

Torre said so much of the early response to the pandemic was done in an emergency fashion to address the immediate needs and changing regulations of the health orders. He said now there is a little more time to work ahead, and mental health will return to being a priority.

“When you hit six months after something hits, that’s a good milestone to recalibrate.

We are now into recovery. We were in a response mode for months,” Torre said. “I think everybody recognizes that one of the most lasting impacts from this is definitely going to be the mental health and some of the social and community changes that are happening because of this pandemic.”

City staff are working to open up community conversations about the winter season. Without knowing how the ski resort will be regulated and what the capacity for shops and restaurants will be, come winter, Ott said planning is needed to prepare for the potential of another sustained hit to the local economy.

“We are trying to get a little bit ahead every week. Even if it’s bad, we are better off if we kind of know,” she said.

Mountain resort towns are working together to get a sense from Gov. Jared Polis if he will be taking it upon himself to regulate skiing again this season, as he did when he passed an executive order shutting down all resorts in the state on March 14, or if he will allow individual communities to regulate themselves based on health outcomes.

Torre said it will take multiple groups as well as public support to create an environment that is able to address and perhaps quell the rising stress levels in town.

“I think collaborative work ­efforts are going to come from this and that’s what is going to chart our course. I do see actual energy being put into this issue and this kind of healing that needs to happen in recovery,” he said.

And, as much as they’ve expressed their concern for the public’s mental health, officials are also acknowledging the resilience of the local community to make it through the empty spring and the high stress summer.

“I am just proud of the community. The locals here have come together to really figure it out and I feel like our guests came and realized ‘oh they are serious about this stuff here,’” Ott said. “It took a little bit at first. I think there has been huge progress that people feel safe coming to our community.”

Mullins agreed, and reminded the public that each of us is dealing with the fallout of the pandemic and natural disasters on top of all the typical day-to-day stressors.

“So far I’ve been proud of the people in Aspen for doing a good job handling this situation,” she said. “Keep having patience, understand that your good day may be someone else’s worst day in the last month.”