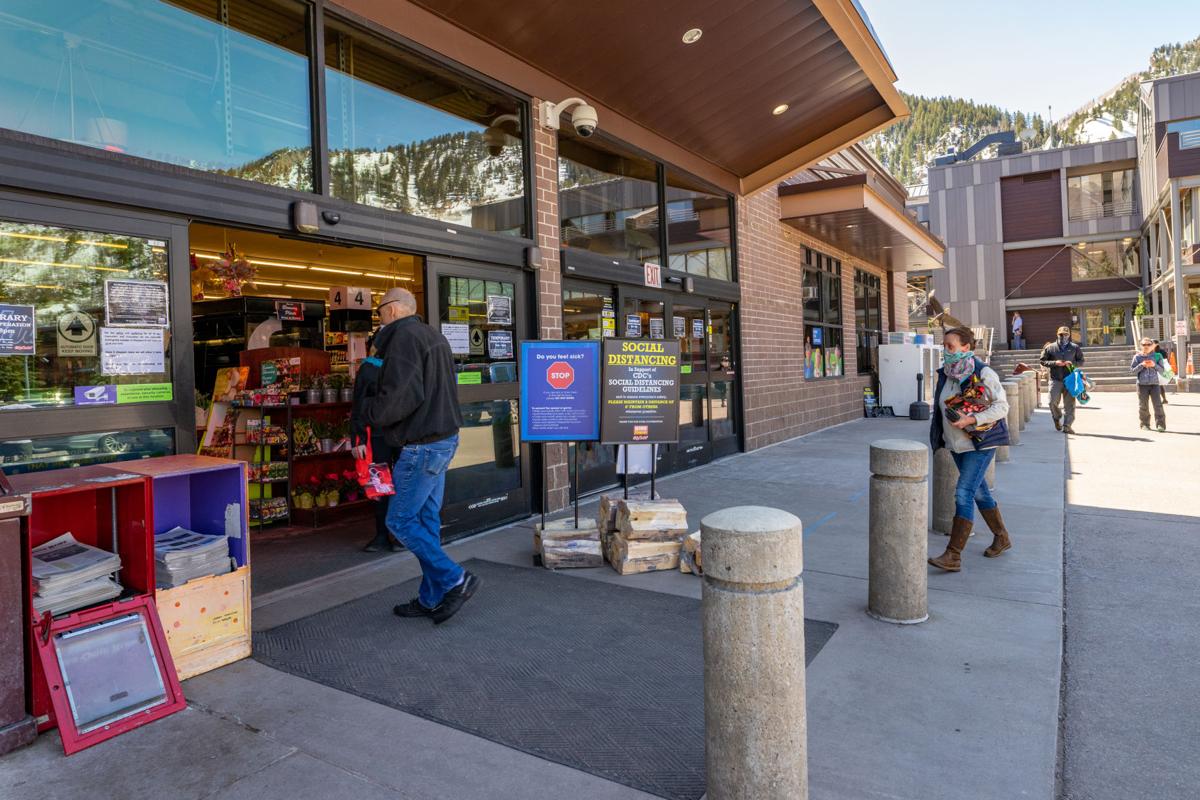 A line of customers formed outside Aspen City Market on Monday, as a 15-person cap on the number shoppers in the store at one time is enforced. The city of Aspen has halted the 20-cent fee on paper bags due to the COVID-19 pandemic and is discouraging the use of reusable shopping bags, out of concern they could carry and spread the virus. 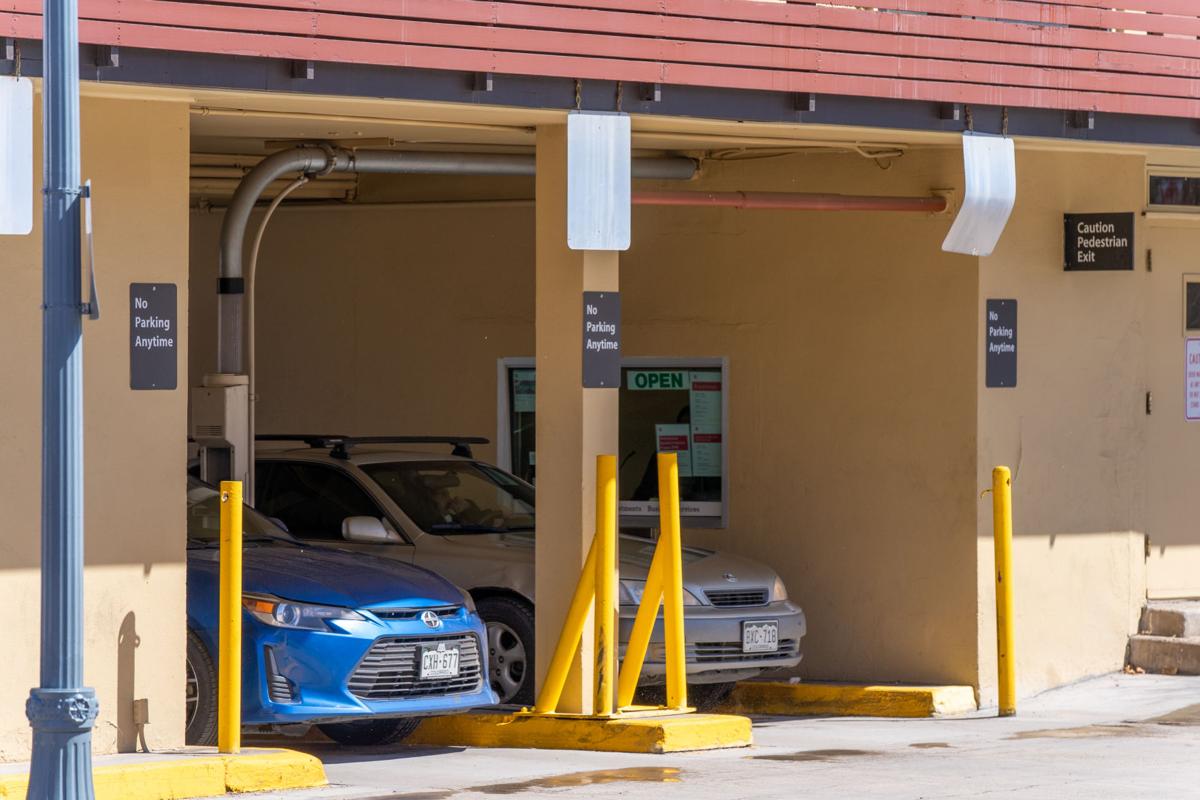 Well Fargo has received permission from the city of Aspen to reopen its drive through, as an added protection for its customers due to the COVID-19 pandemic.

The city of Aspen has temporarily suspended the 20-cent single-use bag fee that was first passed in 2011 as part of a waste-reduction ordinance intended to cut down on plastic bag usage.

The fee suspension went into effect April 4 and continues until May 31, “to help prevent the possibility of reusable bags contributing in any way to the spread of coronavirus in the Aspen community,” said CJ Oliver, director of environmental health and safety for the city of Aspen.

“Plastic bags will still not be allowed at Aspen grocery stores, as plastic has shown to be a better transmission media for the virus than porous material such as paper,” Oliver said in an email exchange. The spread of COVID-19 has put green-thinking municipalities to consider their priorities when it comes to virus transmission and environmentalism.

According to an article published April 1 by Politico, “In the latest sign of how dramatically the coronavirus pandemic is altering the social landscape, even the liberal San Francisco Bay Area this week banned reusable grocery bags as a sanitary measure, dismaying recycling advocates who say durable sacks should still be allowed at stores.”

While reusable bags remain legal here, Mayor Torre said Monday that Aspen’s decision to temporarily do away with the 20-cent fee is part of an effort to keep the public as safe as possible.

“In a time of emergency like this where we don’t want any cross contamination and spreading of this virus, one of the ways that we can do that is to discourage people from bringing their reusable bags into the store,” he said.

“Allowing everybody to get grocery bags at the grocery store and waiving that fee is just making a cleaner process and lessening the transmission from materials that are brought home,” Torre said.

David Clark, store manager and an owner of Clark’s Market in Aspen, said of reusable sacks, “Our preference would be to leave them at home.”

On April 6, Clark’s employees were told of a new rule asking customers who bring their own bags to the check-out line to do their own bagging.

“Cashiers will no longer be handling bags people bring in,” Clark said. “We’re happy to do it in our bags.”

So too throughout the Kroger grocery chain, which include the City Market stores operating across the Western Slope.

“With the safety of our customers and associates in mind, at this time we are asking customers to kindly bag their own groceries if they wish to use a reusable grocery bag,” said City Market spokeswoman Jessica Trowbridge. “We encourage customers to frequently clean and wipe down their reusable shopping bags,”

She went on to say, “We continue to allow our customers to use reusable shopping bags, provided there is not a state or local ordinance that prohibits use in places where there are prohibitions on reusable bags.We are working with city leadership in areas that currently have bag bans in place to temporarily lift these bans.”

According to the city’s CJ Oliver, “The change wasn’t necessarily to discourage the use of reusable bags as the science on this seems to indicate that the increased risk of transmission from reusable grocery bags is very low, particularly if folks are following the practice of washing their bags regularly which we have always encouraged.

“We’ve made the change to allow those who are not comfortable using reusable bags during the COVID-19 outbreak to have a different option at no additional cost,” Oliver added.

In an email Monday afternoon, she wrote that “the efforts a lobbying group for the plastics industry (The Plastics Industry Association) has undertaken to promote the use of single-use plastic during this time of crisis,” merit consideration.

“It is important to note that manufactured plastic (or paper) bags are not sterile and could be contaminated with virus and bacteria,” she wrote. “One study indicates the virus associated with COVID-19 can live on plastic surfaces for nine days, so we encourage everyone to wash their hands immediately after handling any bags and packages. If using a reusable bag to shop, it should be washed immediately after use.”

On March 24, Wells Fargo Bank in Aspen reopened its drive-through banking function that had been shuttered since July 2016.

The bank voluntarily closed the drive-through after it was told by the city that its request to install an ATM in the existing drive-through would trigger a commercial-design review. At the time, the city had a moratorium on land-use applications in the commercial districts and the bank did not seem interested in pursuing the option, given that the moratorium at that time still had seven months until it was lifted.

According to Elizabeth Bennett, a manager with Wells Fargo, the drive-through lanes were reopened in reaction to the COVID-19 pandemic.

Bennett stressed that it wasn’t a permanent measure and was one that had an end date, though she wasn’t positive what that end date was.

The reopening of the drive-through is part of an overall plan to “ensure we’re helping out our customers.”

The city of Aspen is allowing the bank to operate the drive through as a public health benefit.

According to a March 23 letter from city of Aspen Community Development Director Phillip Supino to Wells Fargo’s Jodi Pyle: “The existing drive-through facility does not comply with City of Aspen Land Use Code limitations on the development or use of new drive-throughs. However, its status as an existing non-conforming element of a permitted bank use allows for it to be used in its current configuration. Further, its use will provide a public health benefit, as it permits banking to occur in compliance with Pitkin County Public Health and City of Aspen directives related to social distancing and public gatherings.”

Wells Fargo’s drive-through is allowed to temporarily operate with conditions that include: No alterations to its configuration; the drive-through may only be operated during posted business hours; safety signage for users and pedestrians must be maintained at all times.

Finally, the drive-through would have to close after emergency regulations relating to the coronavirus are lifted in Pitkin County.

In addition to the drive-through function, there are two ATMs in the lobby for customer use. Bennett said that bankers will also meet with customers “by appointment only.”

Appointments may be scheduled by calling 970-925-2500, through the wellsfargo.com website or its mobile app, Bennett said.