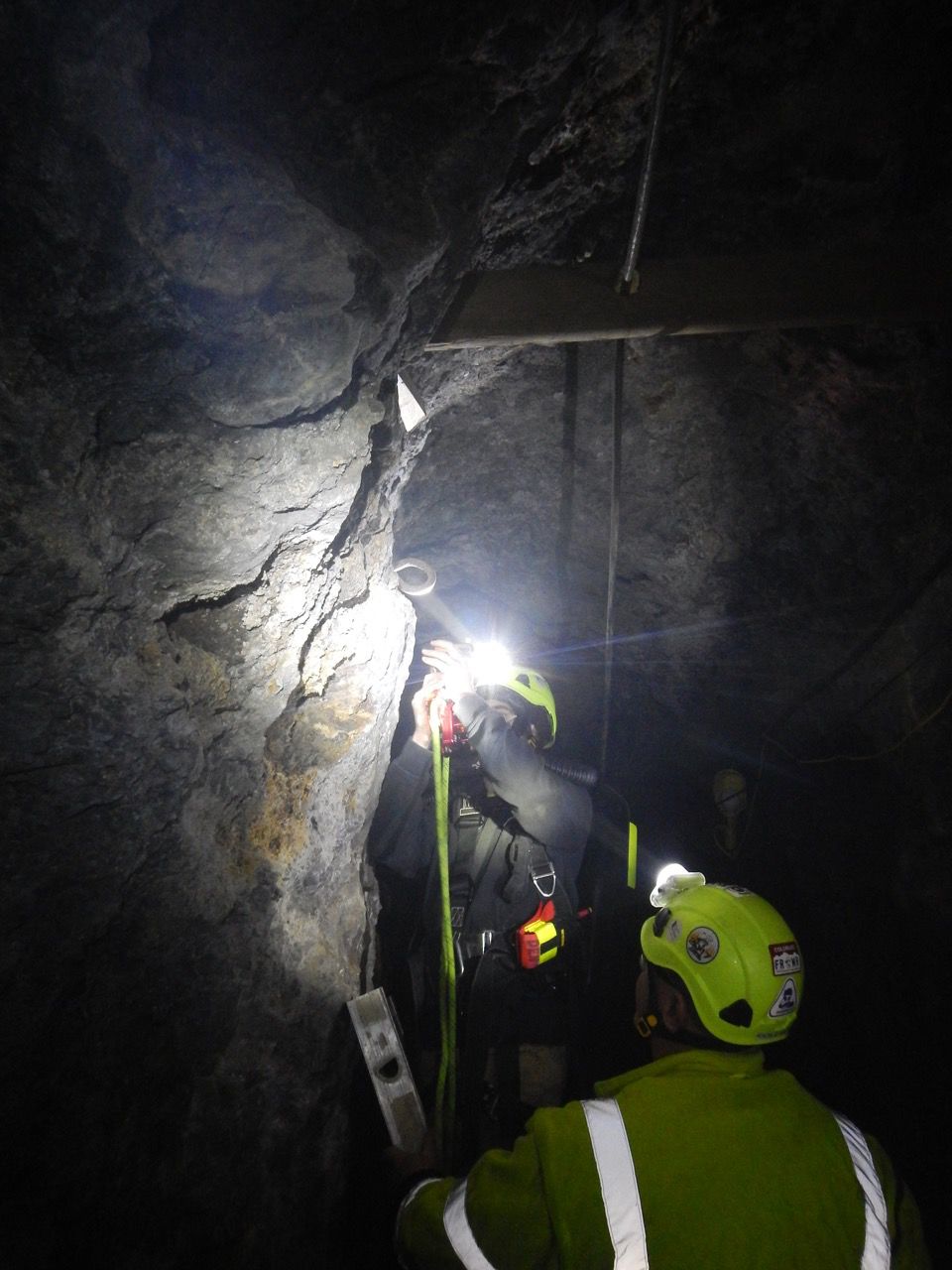 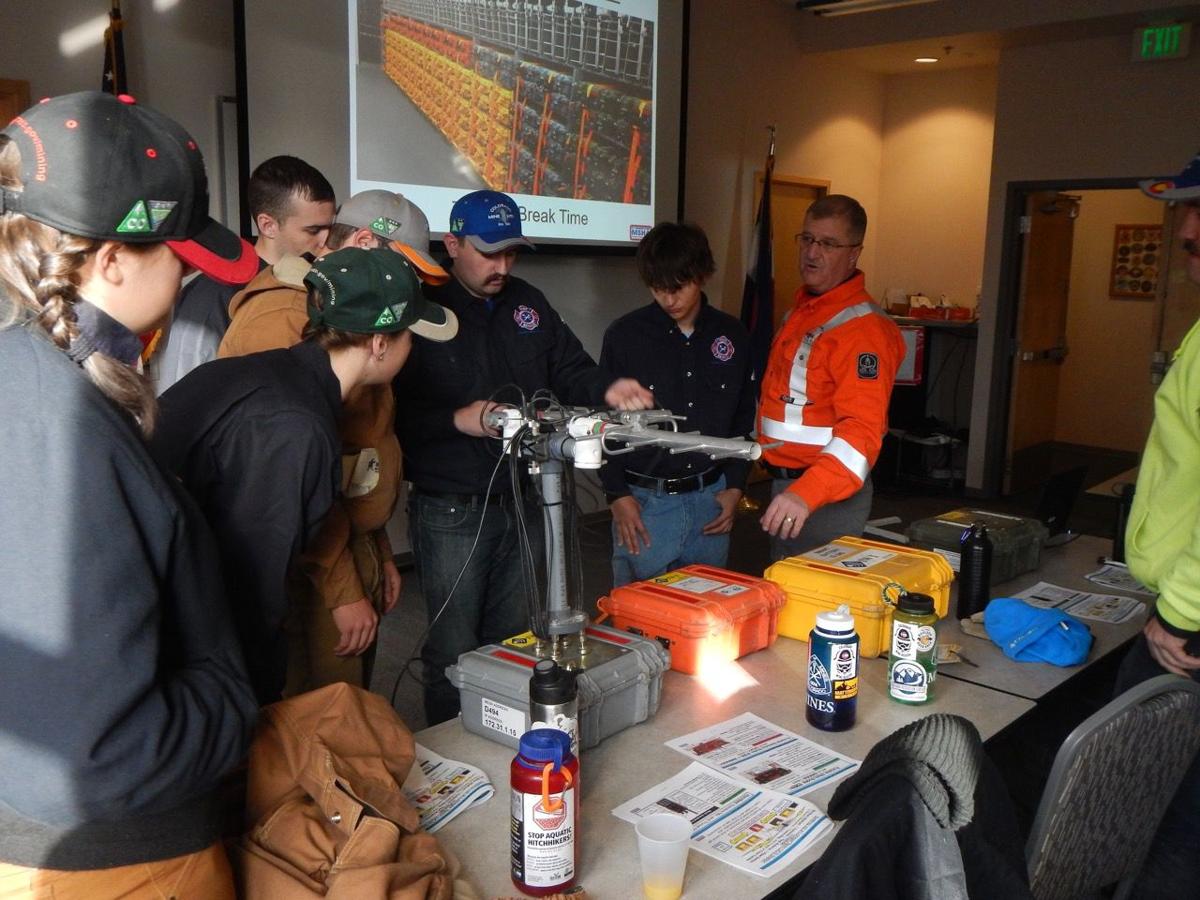 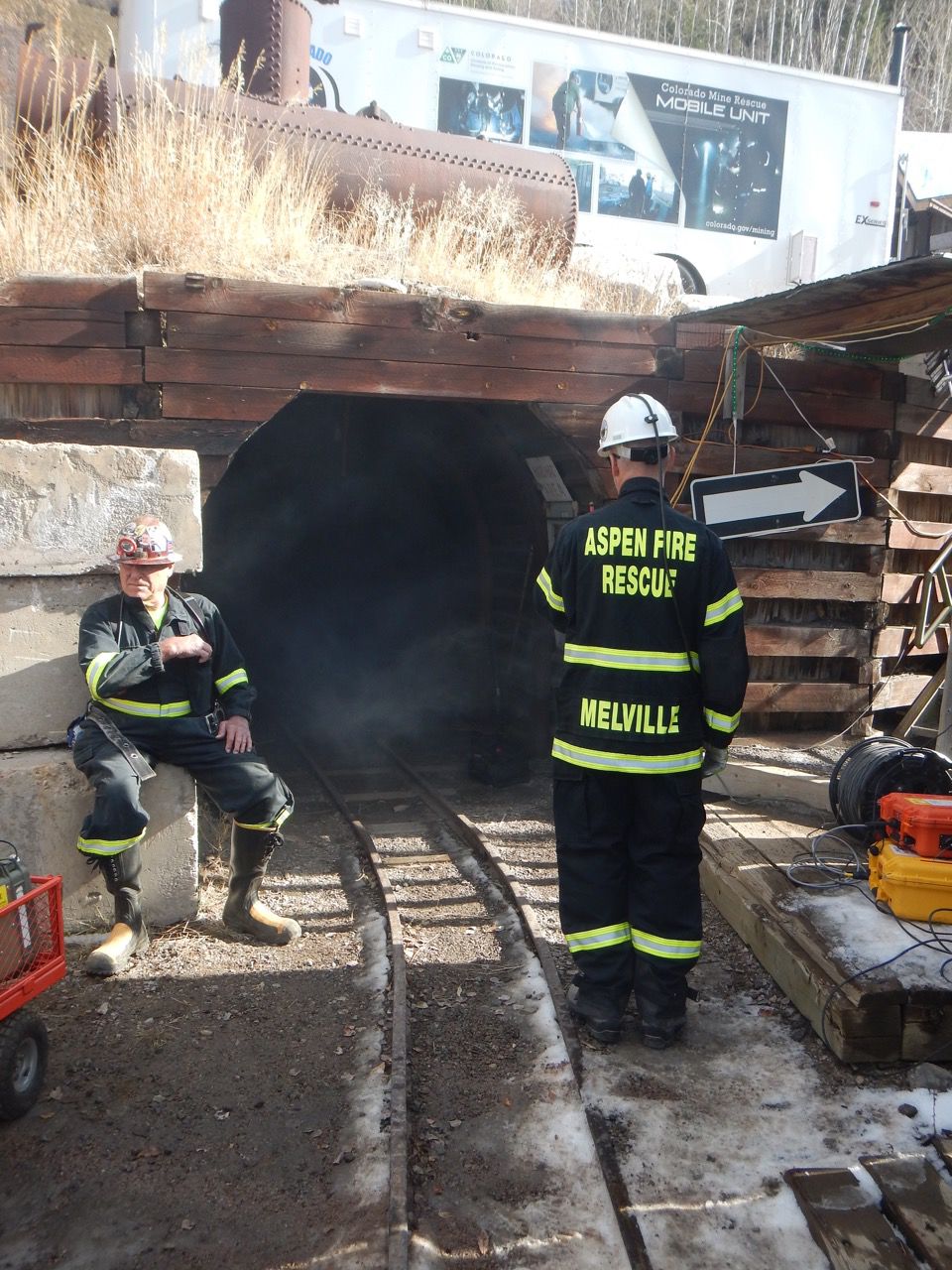 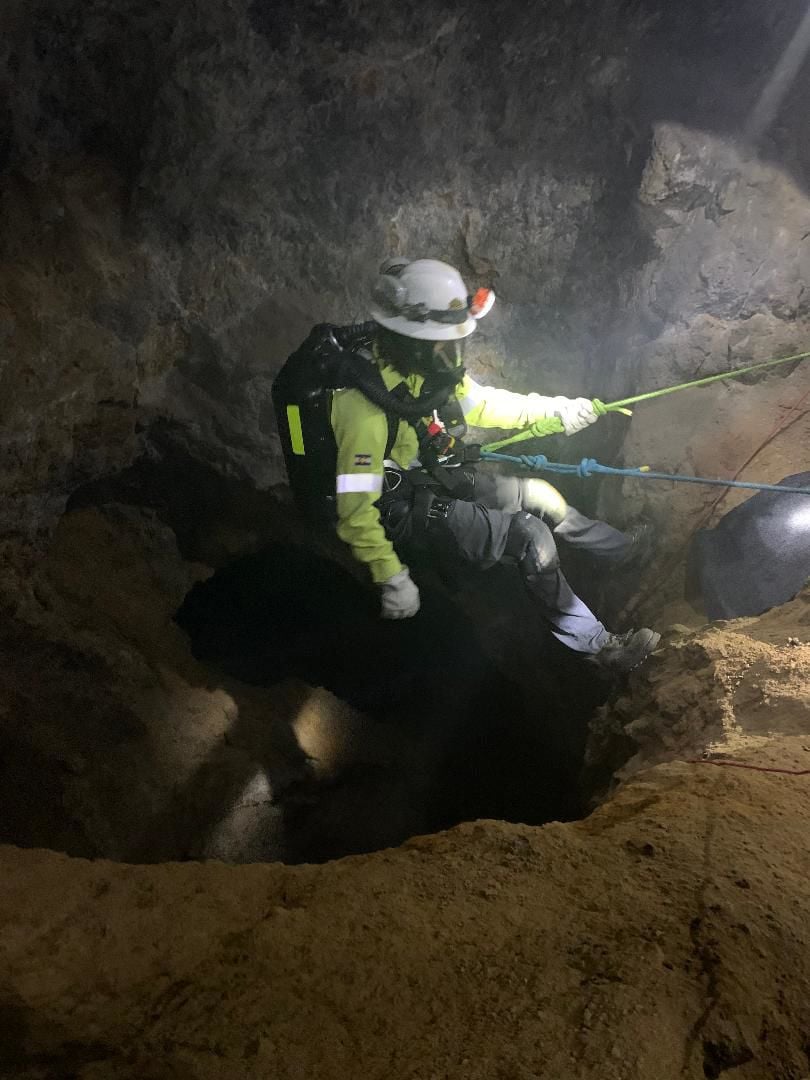 A rescuer stood on the precipice of a mine shaft. Peering into the darkness below, his safety tether was unhooked from a rusty eyelet drilled into the rock wall. Stoicism did little to mask the nervousness in his eyes as the final order was given to lower him down. His life was now entrusted to his colleagues, the rope and his harness.

Over the weekend of Nov. 16-17, Smuggler Mine was the base of operations for an intensive mine rescue training class. The Colorado Division of Reclamation, Mining and Safety (DRMS), the Colorado School of Mines (CSOM) and the federal Mine Safety and Health Administration (MSHA) teamed up for the workshop.

Longtime local, Aspen Volunteer Fire Department (AVFD) ­retiree and former Smuggler Mine owner Jay Parker was pivotal in bringing the class back to Aspen. Working with Brandon Neal, the mine rescue coordinator for the Colorado DRMS, this is the fifth joint training at Smuggler with MSHA and DRMS.

Jeff Bain of MSHA functioned as the overall incident commander during the live, realistic training scenarios deep underground. “Basically, something bad has happened. We go in to fix it and bring trapped miners out,” Bain said.

November was chosen as the opportune time to invite crews to train in Aspen due to lower price of hotels and less traffic.

“Smuggler is a little bit different from modern mines,” Bain said. “Back in 1800s miners chased the ore wherever they could.” The result of the haphazard mining in Smuggler is vast labyrinth of tunnels and shafts going in all different directions and angles. This is noticeably different then the extensive planning and layout of modern-day mines.

The class consisted of about 25 trainees and was comprised of individuals from a variety of backgrounds. Some came from the CSOM, based in Golden, and were not old enough to drink alcohol. A handful of AVFD fire fighters, along with Parker, also attended the training.

One group, a cadre of gruff coal miners wearing dirty overalls, rubber boots and camouflage sweatshirts, came all the way from Spiro, Okla. When asked what they thought about Aspen, one miner replied in a slow drawl, “Someone tailgated me down Main Street with their headlights on and I about had to git’ out my truck.”

A makeshift encampment of trailers and tents was set up by Parker at Smuggler Mine to help accommodate the out-of-towners. “They’re always invited,” said Parker cordially. “Anything we can do to help the school and the state or feds. If people want to train here, we’ll make the Smuggler facilities available.”

In anticipation of the rescue drill, trainees were broken out in teams of about six members. Each team had a designated instructor, a team leader and a second-in-charge. Other team roles were assigned for navigation, medical, gas-monitoring and technical rescue.

After a brief preparation within the mine by instructors, the trainees gathered around Neal and he presented a hypothetical scenario: A group of teenagers had broken into Smuggler Mine. One had escaped to notify authorities that his friends were still trapped.

“Typically, what I do is present the trainees with a M.E.R.D.,” Neal said. MERD is short for mine emergency response development. “We try and focus on a specific skill or skills. For this training we wanted to hit on first aid, team work and high-angle rope rescue.” Neal stressed the three Rs during the training: rescue, recovery and research.

Following the briefing, and with limited oversight from the instructors, it was the responsibility of the trainees to complete a mock rescue of the trapped kids.

The Oklahoma crew had a separate assignment that focused on shoring up a mine collapse, underground fire fighting, first aid and smoke ventilation.

Pitkin County EMS dispatch was notified that there may be reports of smoke on the mountain prior to the training. During the live rescue simulation, Smuggler was filled with faux-smoke and it proved to be quite a challenging task for the Oklahoma crew to ventilate properly.

In order to complete the MERD, trainees had their choice of high-tech rescue equipment, including a recently developed underground radio system, four-hour oxygen rebreathers, head lamps, climbing ropes and harnesses, and much more. The opportunity to go hands-on with complex equipment was extremely beneficial.

It took two separate teams approximately six hours to complete the rescue. The first team to enter the mine portal was tasked with deploying the radio system and exploring deep within the tunnels. The second team, outfitted in full coverage facemasks and rebreathers, dealt more with the extraction and medical care of the victims.

Once inside the mine, the teams worked to overcome the adversity inherent in mine rescue. The only light came from headlamps. Team members’ hardhats constantly knocked against the low ceilings. Walking in a single-file line, communications between the team leader, walking point and second-in-charge at the rear of the column, became stressed. The four-wheeled cart for medical, climbing and radio supplies was a burden to maneuver along ancient mine-cart railways and around sharp curves.

Finally, rescue team two came into contact with a young girl staged inside the mine by the instructors. As the rescue team went to work doing a brief trauma assessment, she revealed that one of the children trapped, her brother, had fallen down a 230-foot mine shaft.

After escorting the girl back out of the mine and delivering her to the MSHA’s brand new, state of the art mobile command trailer, team two reentered Smuggler Mine. An underground rapelling system was carefully put in place near the mine shaft where the victim had fallen. It was then the task of the team leader to rappel to the bottom of the shaft and rescue the imagined victim.

According to Parker, the mine shaft used for the high-angle rescue is known as the Fan Raise. Legend has it that local Jess Graber used to keep a stash of Tin Cup and Stranahan’s Colorado Whiskey at the bottom. The first team operated in a section of the mine known as the Gerrish, named after the local family.

The girl inside Smuggler was actually Neal’s 13-year-old daughter, Emma. His family also made the trip to Aspen for the mine rescue training.

“It’s like a mini-vacation for us. We get to come up to Aspen and play,” said Neal.

Paradise Bakery is the Neals’ favorite place to visit in Aspen, when the family is not involved in a rope-assisted simulated rescue from a 130-year-old mine shaft.

“The pink grapefruit gelato at Paradise. It doesn’t get any better than that,” Neal said with a beaming grin.

Another primary focus of the training was to teach miners how to operate a new style of underground radio. Bain also taught the basics of the radio equipment and how to deploy it.

“When an explosion occurs in a mine it blows the wired communications systems to heck,” Bain said. The wireless radio allows teams to rapidly reestablish communication from deep within the mine to a “fresh air base.”

The development of the new, encrypted, underground radio began in the wake of two major mine disasters, Sago and Upper Big Branch.

In 2006, an unknown ignition source sparked a tremendous underground explosion at the Sago coal mine in West Virginia. Twelve miners were trapped in the mine’s furthest reaches. During rescue operations, a communications error turned tragedy into outrage. Families of the trapped miners were delivered ­information that 11 of the miners were found alive and only one had perished. The inverse was painfully true; a lone miner had survived and the other 11 were dead.

The inclusion of 25-bit encryption during development was of the essence during the media fall out of Sago. While it’s unclear exactly how the miscommunication occurred, once the erroneous information got out, it spread like wildfire. Inaccurate news reporting, some of which may have been intercepted from unencrypted transmissions, contributed to a false sense of hope, and the eventual lawsuits that followed.

The new underground radio technology debuted in 2015, and currently there are five rapid deployment sites spread throughout the United States. Each site is strategically chosen for its proximity to mining epicenters. Denver, where Bain is located, is one of the five.

The radio uses small rugged boxes, called gateways or nodes, and portable antennas to create a transmission pathway. Each node requires a portable battery, lasts up to 24 hours, and functions essentially as an underground signal repeater. Fiber-optic cable can also be added into the mix to significantly improve the range and reduce deployment time. For example, if there is a trapped miner 3,000 feet into a mine, fiber-optic cable could quickly be strung from the surface to 2,500 feet down, with the remaining 500 feet being handled by the nodes. When paired with a handheld radio and gas monitoring system, the system can also transmit text messages, readings on various levels of toxic chemicals in the mine, and a ­rescuer’s location.

“It’s always fun to do training, and hopefully we’ll never have to use it,” said Parker, the AVFD veteran who retired after “20 and little” years and who is a previous owner of the Smuggler Mine.

Chris Lougeay is a freelance writer whose work appears regularly in the Roaring Fork Weekly Journal. An Aspen volunteer firefighter in training, he participated in the rescue course described above.