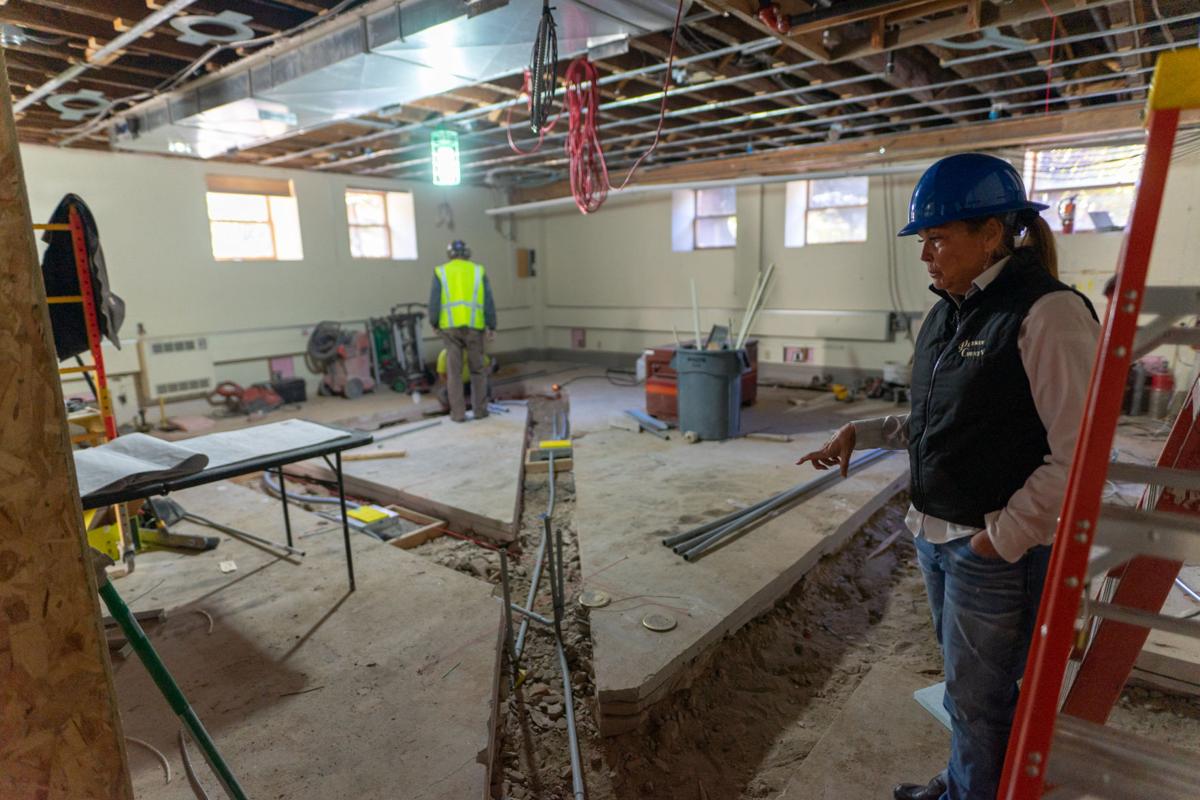 Pitkin County facilities director Jodi Smith explains the vision for the third courtroom, which will be on the building’s basement level. 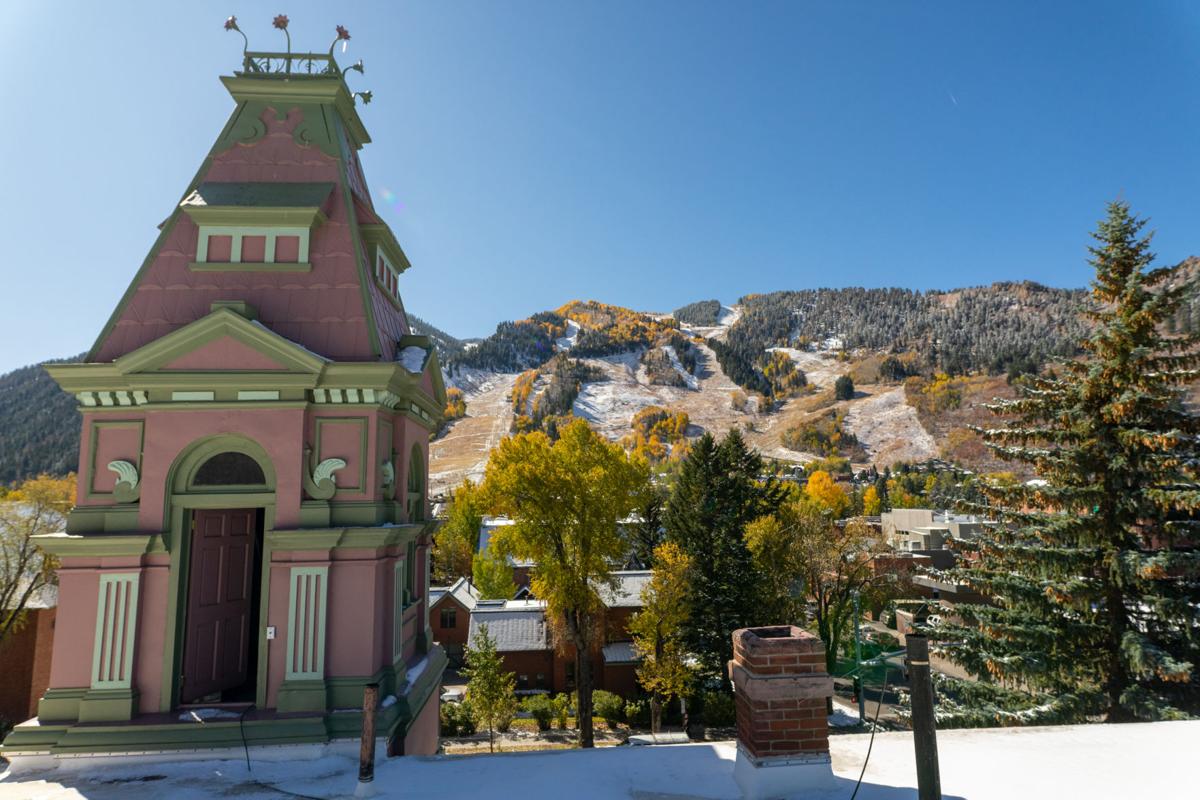 From the roof of the courthouse, Aspen Mountain, complete with both fall foliage and snow, is almost at eye level. 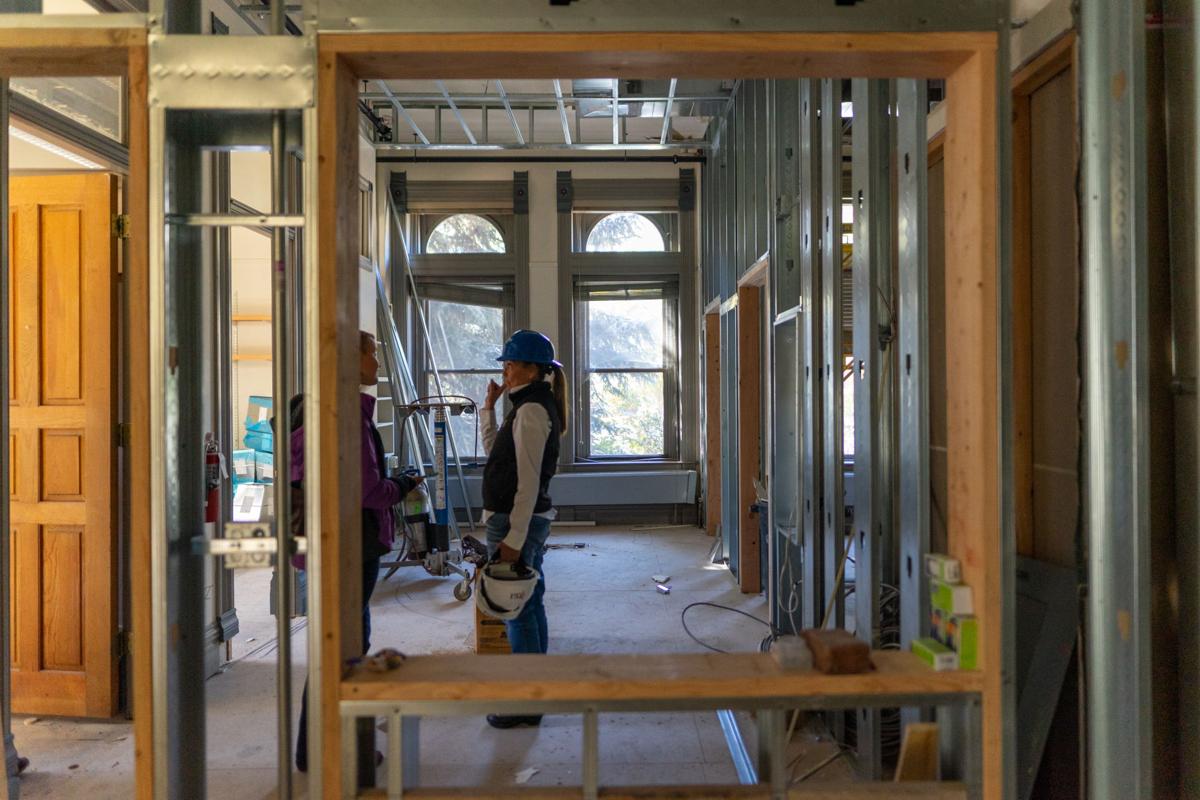 As the Pitkin County courthouse renovations progress, the 129-year-old building’s history is on full display, especially to those overseeing the project.

“We’re obligated, but we’re also very passionate about saving and protecting this as our gem,” Pitkin County facilities director Jodi Smith said, noting that the courthouse is listed on the National Register of Historic Places. “Once it’s altered, it can never go back, so we want to do the best we can by this. I’ve heard the county say this is the heart of the city and county, and we want to keep it that way.”

Construction began in September, and the first phase of the remodel is well underway. Smith estimates that work should be able to begin on the second phase early next year, and she’s already learned more than she knew about the building in her 30-year career with the county. When touring through the site, she’s quick to point out details she’s noticed, such as the charring in one corner of a ceiling on the lowest level.

“The sheriffs used to live in this building, and I’m wondering if this was a kitchen or something,” she mused. “It’s just fun to see what you uncover.”

In the recent past, the building housed the Aspen Police Department and the sheriff’s office in addition to the courts. Since those entities now operate in more dedicated spaces, the renovation is an opportunity to both return to the building’s original purpose — a dedicated courthouse — while anticipating future needs.

The most obvious changes for the public will be upon entering the building, Smith said. The Main Street entrance will now be the only one accessible without an employment badge — and accessibility was a huge discussion point among stakeholders.

“We worked with the historic preservation office and the city of Aspen, and the goal is to have a single point of access for all citizens,” she said. “So that includes people who need accessibility. We are adding a ramp and sidewalk. It will take them into a lift that will just take them up half a floor, and they’ll come out in the lobby in a secure area.”

The lobby, too, is seeing a drastic face-lift. Much like most courtrooms in the country, Pitkin County’s will soon have a security screening at its entrance. And while people with court business currently have to go to the second floor to see the clerks, the updated layout will have a much more spacious clerks’ office along the north wall of the main lobby.

“They can do their business with the court clerk and their administrative functions on the main level, instead of having to work their way upstairs to find the court clerk in that little corner office. That’s a really big deal,” Smith said. “They’ll have everything they need: customer service, their own meeting rooms, their own private restrooms — which they’ve never had.”

Of course, there will still be a blend of old and new in both aesthetic and function.

“It’s open, so people can see the vault, and that will be their copier room back there. Again, our intent is to save that stuff. There was actually a request, ‘Can that be removed?’ And, um, no,” Smith chuckled.

The district attorney’s office, which will be moved to the first floor from its current basement location, will also see additional office space and, importantly, a private waiting area, she continued.

“Our intention as we designed and developed this with our entire team — which was all the tenants that are going to be in this building, along with our architect, Anderson Hallas — is to make sure we’re bringing as much light into the interior [as possible],” she said. “The only other offices in this building will be district attorney, probation and Alpine Legal Services will also be in here. It’s a good fit.”

Perhaps the most activity in this first phase of the project is on the basement level, where the district attorney’s office and probation currently reside. In the future — probably in June or July next year, when Smith estimated the entire roughly $4.6 million project will be completed — that floor will instead host a third courtroom.

“Their projections are that they are going to be growing and growing, so I don’t know that it will be in operation right away, but I know that we are already planning for a trial that’s going to have a huge overflow in December that will have to go over to the library,” Smith said.

But like with the rest of the project, attention to detail and preserving the historic nature of the building and atmosphere are at the center of every decision.

“Our historic preservation officer ... felt really strongly about saving and protecting the columns so that they will stay visual,” she explained. “So little touches like that are super important.”