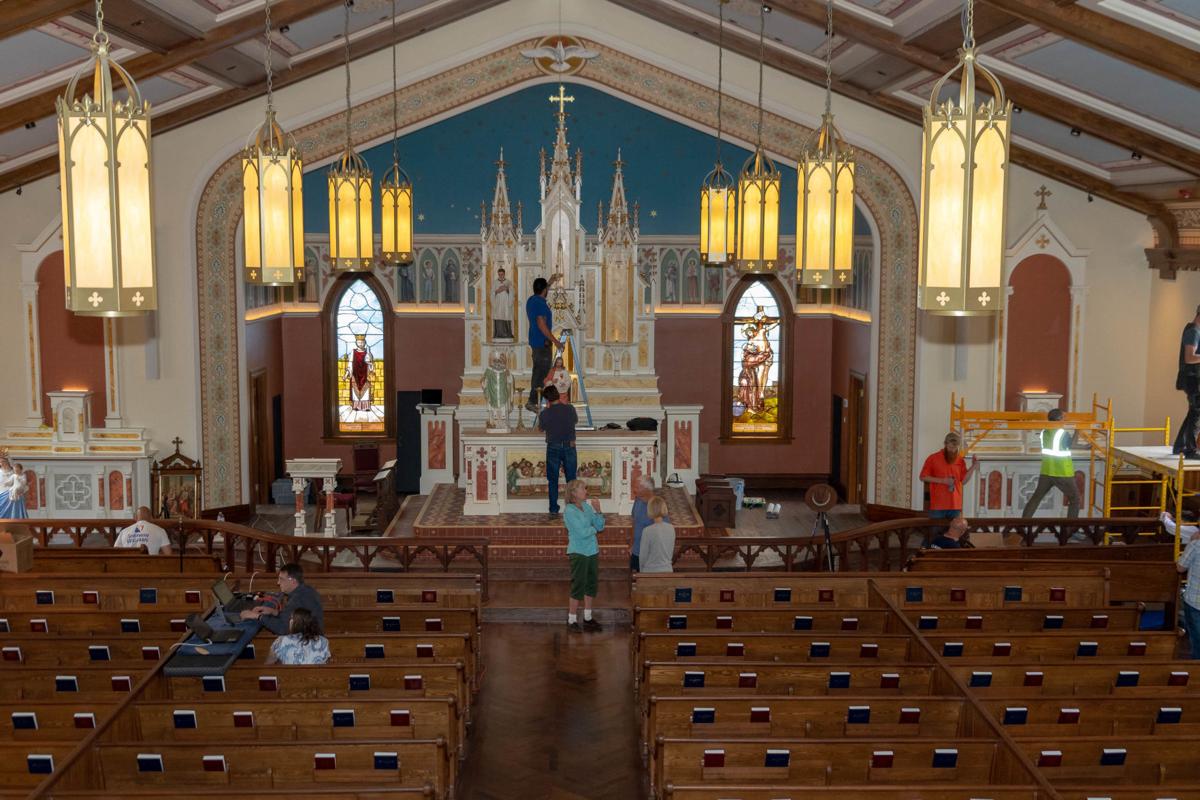 Final preparations continued Thursday for this weekend’s reopening of the second-floor sanctuary of St. Mary Catholic Church, which has been under construction for over a year. The $7.5 million renovation took the 1892 church out of commission for Christmas, Easter and the beloved St. Patrick’s Day dinner, for what is believed to be the first time in its history. 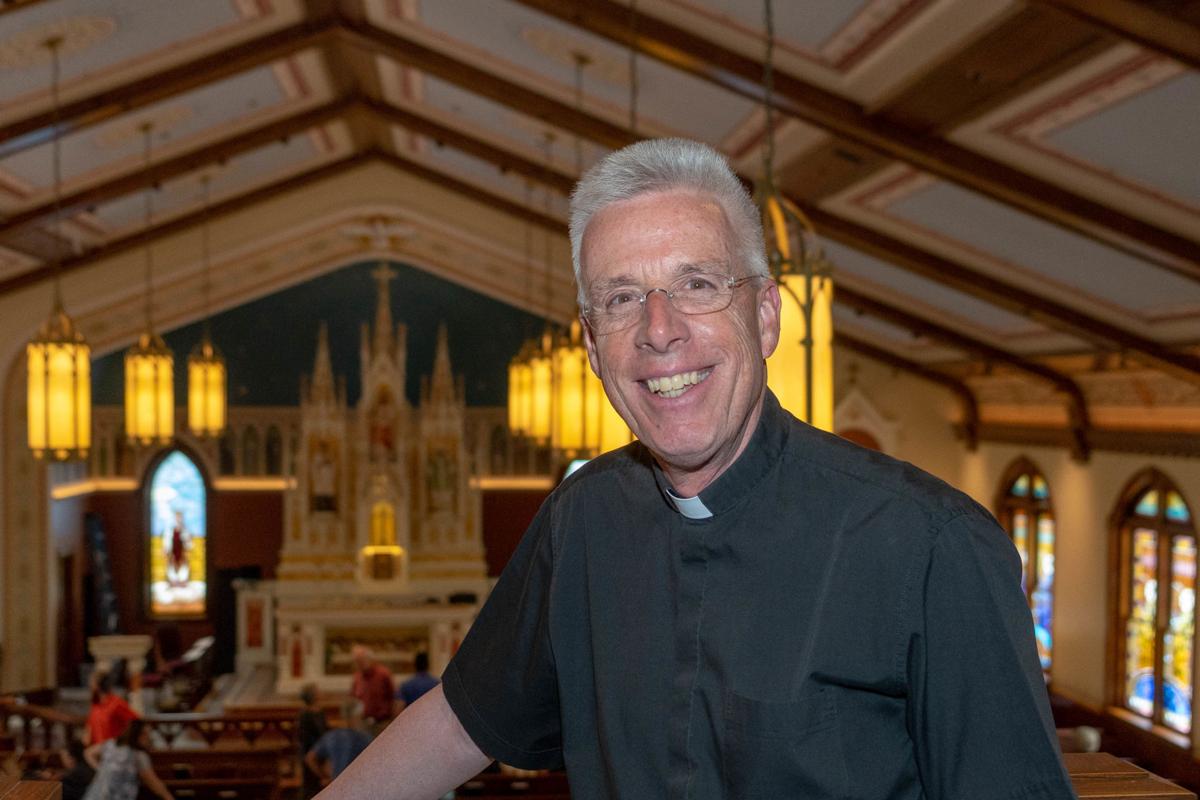 Father John Hilton will celebrate Mass three times this weekend at the newly renovated St. Mary Catholic Church, including today at 7:30 a.m. and 10 a.m. An open house and reception will follow at 11:15 a.m. The church is located at 533 E. Main St. 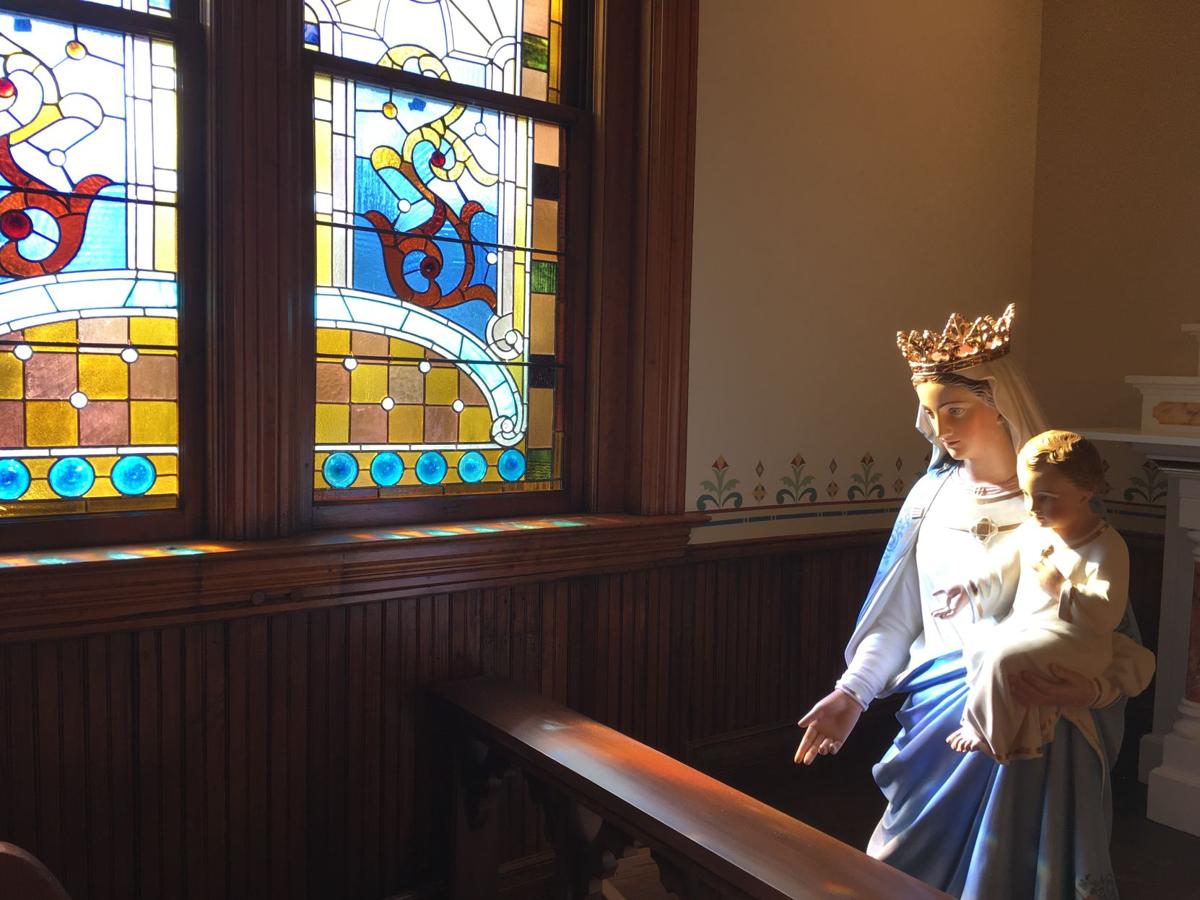 Light shrouds statues of the Virgin Mary and Jesus in the church last week. The figures were moved temporarily from their podiums during final preparations to restore the church in advance of this weekend’s reopening celebration. 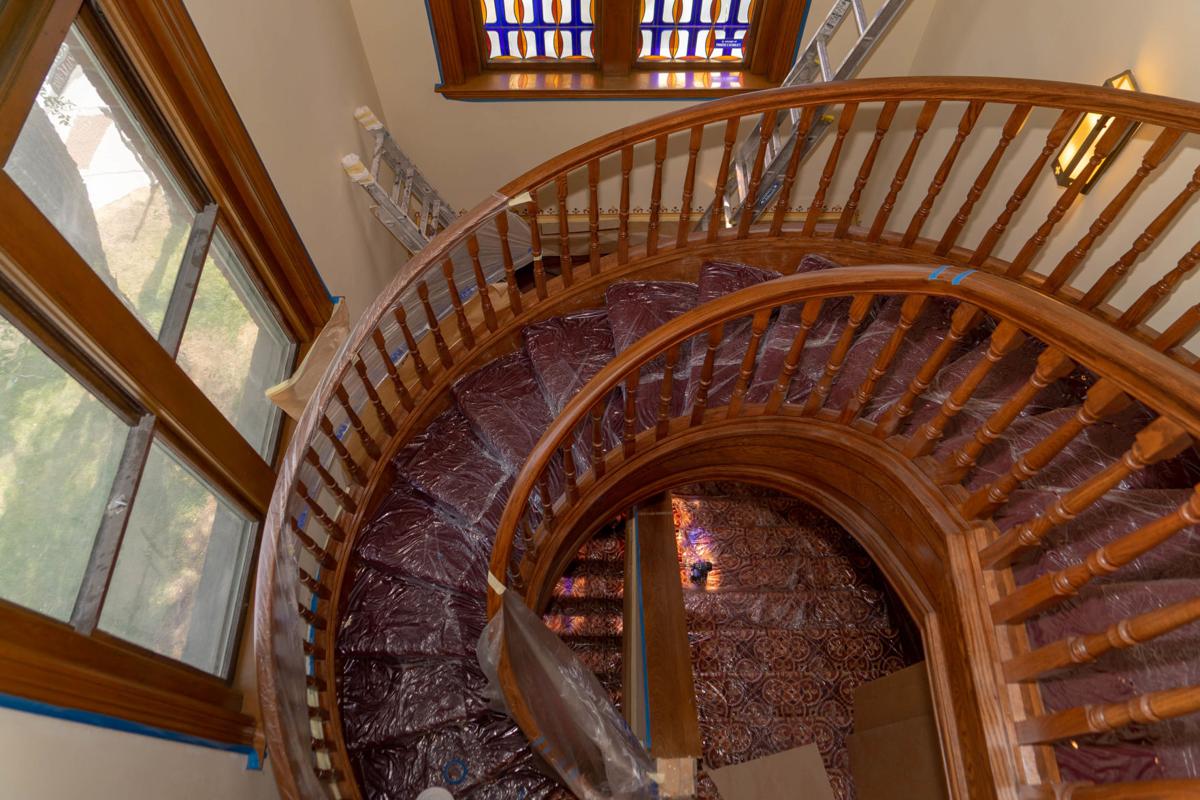 The addition of spiral stairs to the choir loft was part of an overall redesign of the back of St. Mary that improves sight lines to the altar and allows for more light to shine through the church. 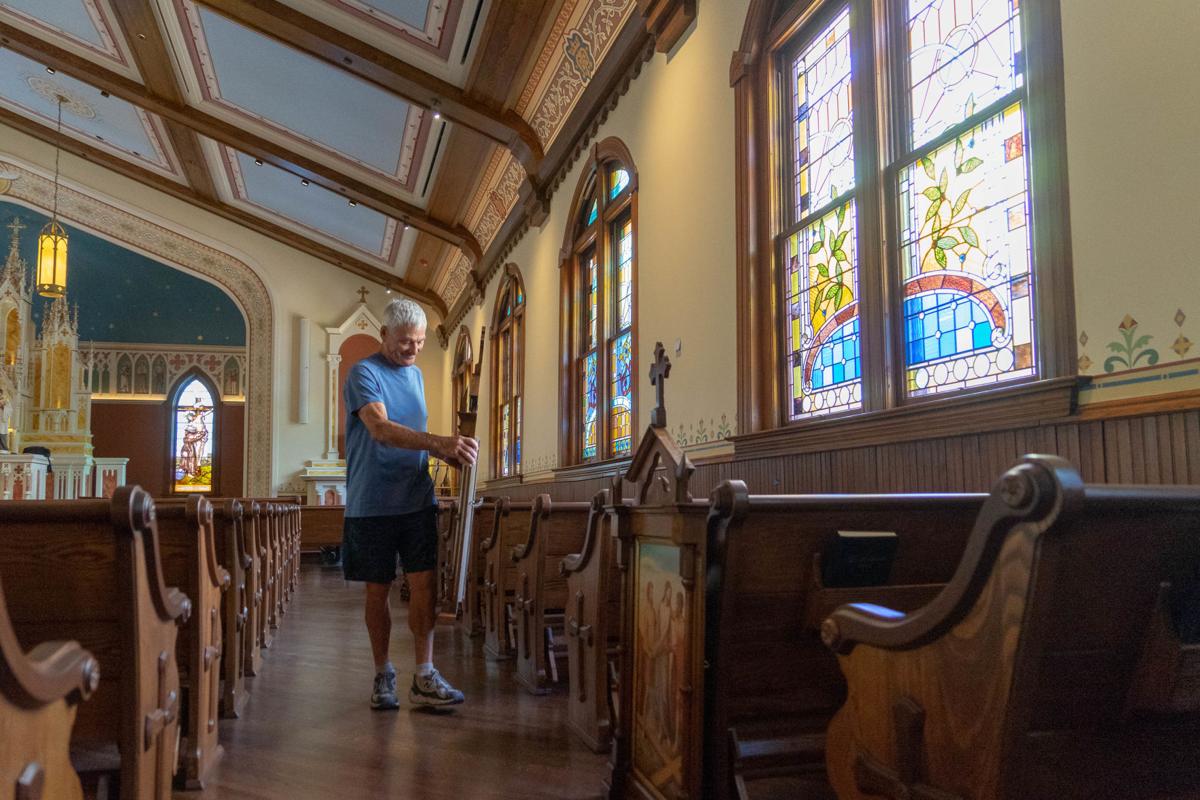 Richard Beauchamp returns one of the Stations of the Cross to its traditional location on the church’s west wall.

The serpents have sharp, menacing teeth and appear the embodiment of evil that the newly polished St. Patrick statue on the altar of St. Mary Catholic Church seeks to stomp out.

New bells to accompany the 1892 bell named “Maria” were refused and returned to their maker after falling far short in “bell appeal,” according to Father John Hilton, pastor of the church.

His oversight of every level of detail — from pews to stairwells, carpet and the selection of a glowing Our Lady of Guadalupe painting for the entryway — is felt in what is believed to be the first significant renovation in the history of the 126-year-old church.

The tip-to-toe remake that started in June 2017 at a cost of $6.5 million will come in at $1 million over that total, though Hilton said he believes the money can be raised from donors and other sources to fund unexpected costs incurred by a new ceiling and roof.

The building is owned by the Archdiocese of Denver, which coordinates and supervises the bill paying.

St. Mary Church, now adorned with 22-karat gold-leaf stars, has some other new stars surrounding its blessed altar, as well.

They are seen in pictorials of a genuinely diverse collection of 20th-century saints and “blesseds,” including a martyred Mexican boy, an African slave whose owners nicknamed her “Lucky,” and Pope John Paul II.

Hilton characterized their contributions to the 20th century as “holiness out of what was at times real ugliness.”

Who made the cut to adorn St. Mary’s walls for the next century or so was decided by “a saints committee.” They met regularly to select the best of the 20th-century candidates, Hilton said.

Climber Pier Giorgio Frassati, a social activist, is pictured with his pipe. St. Maximilian Kolbe earned his memorial by taking the place of a young father in an Auschwitz starvation bunker.

“These are wonderful stories that really speak to us. A lot of it came out of dark times,” Hilton emphasized.

Women, including St. Teresa of Calcutta, St. Therese of Lisieux and Gianna Beretta Molla, who died in childbirth, were also important 20th-century contributors and given equal time on these walls.

Connecting with the past

Dunn recovered from the sticker shock of building costs to help guide the church into its next century.

That’s a familiar refrain — building the church for the ages — coming from those toiling inside the church in the surprisingly frenetic final days leading up to the open house.

Elissa Taylor, principal of Element Architectural Glass, has spent three years cleaning and refurbishing the St. Mary windows, which were all originally installed in 1892.

There are 75 windows in total, including the rose window that sits high above the church’s Main Street entrance.

“They were in a state of disrepair like I’ve never seen before,” she said, though the glass was in good shape with only about 15 percent of it broken. But about 90 percent of the leading that held the glass pieces in place was damaged, she said.

Taylor contacted Indiana-based Kokomo Glass Co., which made the original leading back in the 19th century, for new supplies. The process to remove the old lead is done in a tub of water after a map is drawn of the original stained-glass pieces, so they are correctly reconstructed. This method also contains the toxic dust.

She was impressed with the glass artisanship, especially considering “how rudimentary the tools must have been 125 years ago,” Taylor said. Part of her repair to the windows was cleaning up some of those “choppy cuts” and gaps in the leading.

“My intention was to rebuild them for the next 150 years,” she said.

Her favorite windows include those with tiny arches that denote “In memory of.”

“I really felt like I was connecting with the past. Who were these people? What were their lives like 125 years ago?” she said.

Last week, while some of the statues were being moved about and repositioned, the Virgin Mary and Baby Jesus were temporarily placed on the ground. Light that streamed through the newly cleaned windows lent a heavenly glow that Taylor said she was fortunate enough to have photographed.

Seeing the inside of the church unveiled and every corner hand-polished brought Marina Skiles of Charles Cunniffe Architects to tears on Thursday. She’s also been key to bringing this vision to life and pored over details like hand-rail compliance during a July 12 meeting involving the owner, architect and contractor with Structural Associates.

It was Skiles who also insisted that Styrofoam faux wooden beams be painted with tiny lines to exactly replicate those from the past. The first attempt by the artisans too closely resembled pine, so the beams were ordered to be repainted.

The $7.5 million project also included the remodel of the kitchen, bathrooms and community spaces on the main floor, which host classes, potlucks and the St. Patrick’s Day dinner.

For the first time in its history, St. Mary’s annual big events, those that had otherwise been held uninterrupted annually for 125 years, needed to find a temporary new home during the construction period.

The Aspen Community Church stepped in as a major partner during the renovation, accommodating weekend services for about 10 months; the cooperative effort and fellowship will lead to a joint Good Friday service next year, according to Hilton and Mike Nickerson, pastor of the church on East Bleeker Street, which is listed on the National Register of Historic Places (St. Mary is not).

Also providing space for worship and holiday celebrations during the construction were Harris Hall and Bumps, which stepped in to offer a venue for the annual St. Patrick’s Day Dinner, a tradition that even pre-dates the 1892 church, as a smaller St. Stephen’s Church existed on this site for about a decade prior.