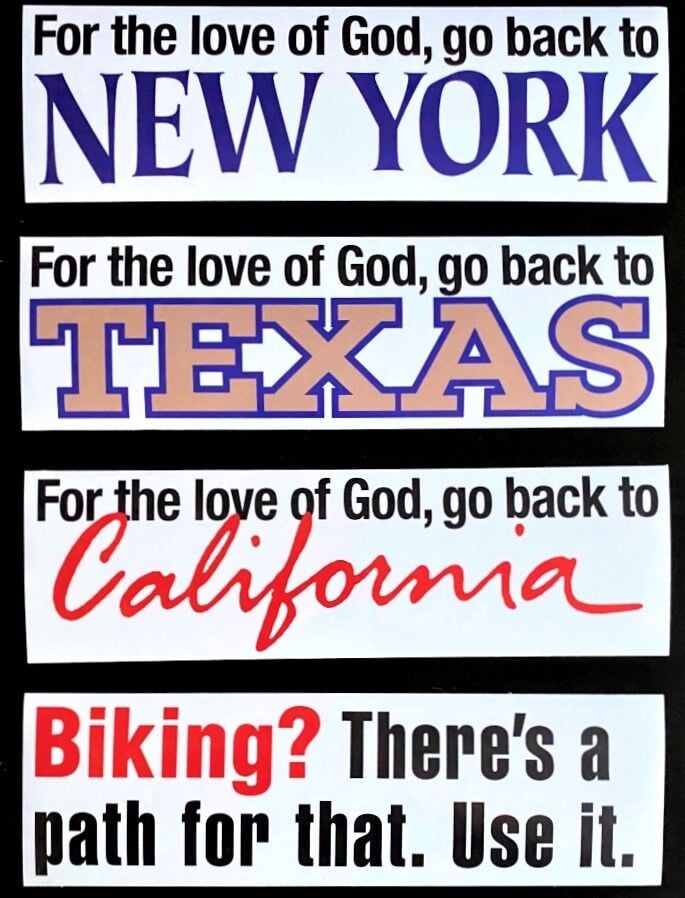 A sample of the bumper stickers that Aspen resident Jonathan Tinker is producing and selling in a tongue-in-cheek response to the massive influx of visitors in town. 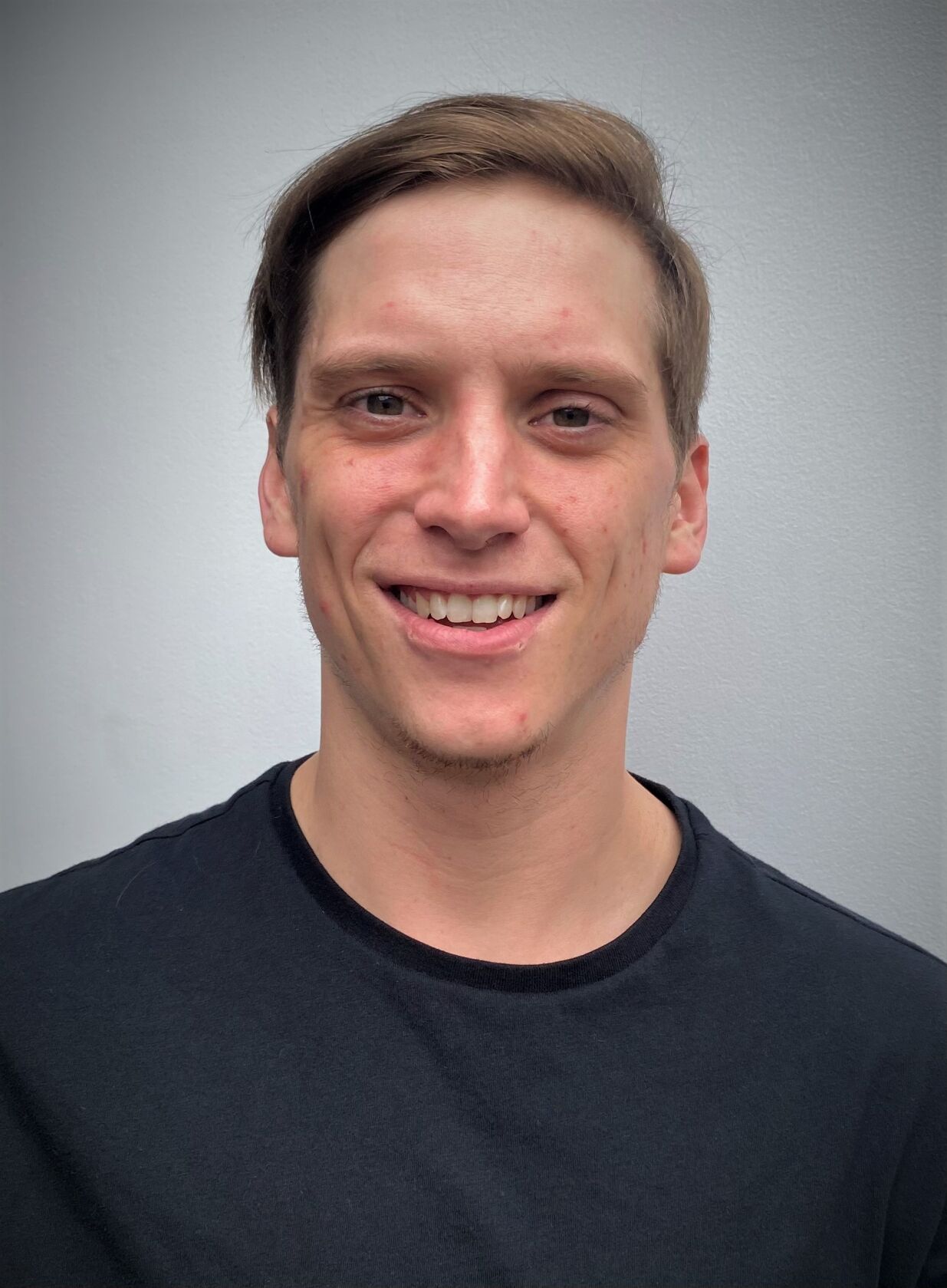 A sample of the bumper stickers that Aspen resident Jonathan Tinker is producing and selling in a tongue-in-cheek response to the massive influx of visitors in town.

Restaurant workers familiar with previous summer-season crowds are lamenting the days when it was merely super busy, not physically debilitating. Families of five are riding bicycles on crowded downtown sidewalks. Pedestrians are largely ignoring the “don’t walk” signals at Main Street intersections, as though they were back in the big city.

This is the state of Aspen in the summer of 2021, the one that was predicted several months ago to be the busiest ever. And with town seemingly bursting at the seams, a local service industry worker is looking to make a few dollars from — and give a few laughs to — the folks on the other side of the coin: those who are growing increasingly frustrated with the next-level crowds and their idiosyncrasies.

Jonathan Tinker, 26, a local hospitality worker who has lived in Aspen for around 10 years, has designed and produced bumper stickers that take a comical swipe at the hordes from outside of Colorado currently swarming about town. The idea started as a joke at the end of last summer, when people were flocking away from pandemic-stricken cities in the Lone Star State, for example, for the cool confines of the upper Roaring Fork Valley.

“It was always kind of a joke amongst friends, particularly against the Texans because it’s so easy,” he said. “When you walk around town and start to see ‘Texas’ on every single one of these license plates, it just gets into your head more and more.”

And as greater numbers of people began to arrive from Texas and other places, he looked for “a funny way to counteract that,” he said. And so he began making the bumper stickers, which say things like, “Biking? There’s a path for that. Use it.” Others are a little more generic: “For the love of God, go back to [insert name of state here].”

Tinker knows he’s expressing the thoughts of many overwhelmed locals.

“We all rely on these people and this way of living. Not that that will change,” he said. “It’s just the massive influx of all these people coming in, it’s driving people crazy. A lot of things are kind of at their breaking point, and you wonder how much longer the town will be able to handle it, on the whole.”

There is a great disconnect under way between the locals and the tourists and outsider transplants, many of whom don’t understand Aspen’s laid-back and quirky culture very well, Tinker suggested.

But ultra-demanding visitors are not completely to blame, he pointed out. A lot of local workers are exhausted, even crabby, from having worked — without a break — through the busy pre-pandemic peak of winter 2019-20, then through the struggles of the ski-season shutdown as businesses fought to stay afloat. Tourism began rebounding strongly last summer and has been busy since, especially after mid-December.

“There is no offseason anymore,” he said. “I haven’t stopped working, I kept cruising along through all the different steps of the [pandemic] process.”

It’s a sad fact that local residents and workers have been calling out other locals for expressing rage — for example, against the pedestrian not bothering to look for cars on a busy downtown street, he continued.

“I’m as guilty of that as anybody,” he said of the occasional disdain for tourists who aren’t adapting. “What they’re doing is the typical Aspen stuff, but it’s 14 times worse.”

Aspen Mayor Torre, who lives downtown, said Wednesday that he’s seeing mostly positive impacts from the influx of visitors. To him, previous summer seasons may have had a more negative atmosphere.

“Obviously Aspen is incredibly popular to be in, it’s a wonderful place. Our natural amenities are our strongest hand, but being in Aspen is attractive to a lot of people, and we don’t blame them,” Torre said. “What I’m seeing this year is a lot more positivity. I think in past years we’ve seen some entitlement and negativity and maybe demanding visitors. I don’t feel that same vibe. I feel like it’s a more positive tourism that we’re having this year, and that’s good news to me.”

Speaking to the bumper stickers, the anti-Texas sentiment expressed by many people in Aspen is outdated, having existed for decades, Torre noted. But other messages such as the one about using bike paths could serve a useful purpose, he said.

“Aspen needs to continue to educate and inform our visitors,” Torre said. “We want to inculcate them into what Aspen ethics are. If we have a lot of visitors who are understanding and respectful of what Aspen is, then it’s going to be a lot more pleasant.”

Torre suggested that one of his messages to visitors would be to “leave the frenetic pace of the big city” behind.

“Come to Aspen to enjoy what Aspen is,” he said. “I see people wanting to come here and being more accepting and to relax. I feel a lot more ­positive energy than I have here in the past.”

Educating visitors about things like traffic and pedestrian safety is something the city continues to work on in great detail, Torre said. He pointed out the recent implementation of traffic-calming systems, bicycle-rack spaces and the like as ways the city is trying to improve the experience for locals and tourists alike.

Tinker said he believes locals could be more patient and accommodating, but added that visitors need to understand that the Aspen community is different.

“There’s some synergy that needs to start occurring, from everybody, because this town is changing — whether we like it or not.”

The stickers can be found at tinyurl.com/aggrobumperstickers, or email Tinker at jonnytinkler@yahoo.com.