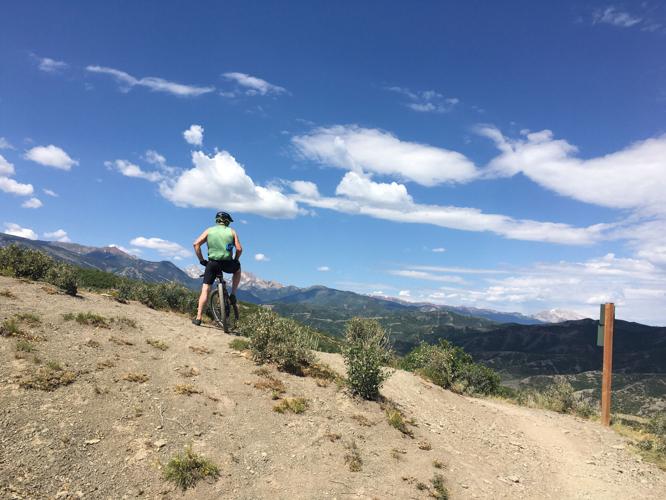 A mountain biker takes a break at the intersection of Airline and Cozyline trails in this 2020 photo. The existing Airline Trail will become downhill only from this point once a new climbing trail is completed. 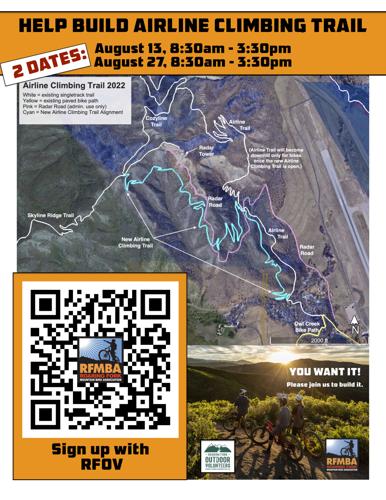 Work has started on a new trail that will provide better access to Sky Mountain Park from Aspen and reduce the chances of collisions for mountain bikers.

“This is the number one thing people are asking for,” he said.

The new climbing trail will also be more inviting to hikers and trail runners, he said. A name for the new trail is to be determined.

A crew from the open space program has cut vegetation on the new alignment for the climbing trail. A contractor, Gumption Trail Works of Rifle, will mobilize this week to begin cutting the new trail by using machines. Roaring Fork Outdoor Volunteers, in conjunction with Roaring Fork Mountain Bike Association, is seeking volunteers for pick-and-shovel work on special features and gully crossings on Aug. 13 and 27. The trail will be ready to ride this fall.

“I think this will really change the Aspen side of the trails,” Tennenbaum said. “It just adds another really fun option.”

The new climbing trail and the downhill trail will share an alignment through a riparian area for the first quarter mile from the trailhead off of the Owl Creek paved path. From there, the climbing trail will split to the west and switchback up the hillside, crossing what’s known as Radar Road a couple of times before hooking into the Skyline Ridge Trail west of the current top of Airline Trail.

Tennenbaum said the new trail will create a convenient loop for cyclists climbing to Skyline. A smaller loop will be possible by hopping off the climbing trail and onto the downhill trail about one-third of the way up the slope. That will be convenient for cyclists in a time crunch, families and people lacking the conditioning for the bigger loop, he said.

The new alignment will also create options for riders utilizing the Cozyline Trail and other routes on Sky Mountain Park.

The Airline Trail debuted in 2013, providing easier access to Sky Mountain Park for riders originating in Aspen and Buttermilk. The route provides a downhill rush thanks to banked curves and straightaways that invite speed. But thick brush and blind corners also creates the risk of collisions.

Mike Pritchard, executive director of the Roaring Fork Mountain Bike Association, said cyclists will welcome a new climbing route and the directional trails. The existing Airline Trail has inconsistent pitches, with a 6% average grade that kicks up to 10 to 12% at stretches. The corners were sculpted with downhill travel in mind.

“The turns (on the new trail) will be climbing turns,” he said. And the climb will be more consistent throughout the roughly 2 miles.

The downhill trail also will receive some tweaks and added features. Tennenbaum said once those changes are made, the Airline downhill will be somewhere between the Seven Star and Deadline trails in terms of challenging features.

Directional travel is slowly starting to become more common in the Roaring Fork Valley as more riders hit the trails. On the Snowmass Village side of Sky Mountain Park, Deadline is a downhill-only route. Viewline is open to travel in either direction but more frequently is used as a climbing route.

Some of the trails in the South Canyon and New Castle trail networks also are designated one-way. The mountain bike association lobbied Pitkin County to add a dedicated climbing trail at the Glassier Open Space in the midvalley but the open space program declined to add a trail in the update of its management plan.

Anyone who wants to sign up for volunteer work on the new climbing trail must do so  in advance at rfov.org/calendar.