I’m a late bloomer. I like songs that were popular six months ago. Sometimes I catch up with fads a touch after the fact. And for the most part, I’m just fine with that. I’ve been pretty agile during these past 2.5 years of pandemic dodgeball. I was an essential worker for the first year and a half, then moved into full-contact retail with and without masks. Like some of you, I never made banana bread or worked from home. I got three shots, and now … you guessed it — I got the ’Vid!

I know, it’s like I’m a wedding planner trying to tell you that everyone will want you to play “Gangnam Style” at the reception. Better late than never? I can now join the millions and speak firsthand about my experience.

I always imagined what this moment would feel like. Would it hurt? How bad would it be? How would I use it for column fodder, or would I even be strong enough to type? It’s crappy all right, but I’m still typing. Surely I’ve had it already, except dozens of home tests and PCR tests would say otherwise.

Then came July. It was hot. Tourism reached its typical fever pitch. Though this summer’s tourists feel like a different bunch — more vacancy behind their eyes and lots of bark on the front side. They aren’t here for the natural beauty. On the contrary, it was conveyed to them that this place should be shortlisted as THE expensive, overpriced thing to do. Wear a matching spandex set and play music on a speaker in the woods … check!

Dodgeball got heated in July and came with plenty of extra balls to dodge aside from COVID. I’ve been dodging COVID like Neo in “The Matrix” though, so I was safe, or so I thought. I was more concerned with energy being sucked out of me and less concerned with the nagging pandemic. I felt rundown and thought I just needed major self-care and a camping trip.

I’ve passed on two Sunday bike rides in a row, which is cause for concern in my house, so I took a home test. I was negative, just worn down. No cause for concern. Then my symptoms got worse. I felt pretty horrible and couldn’t sleep so I thought I’d give one last home test a try and voila! Those two important pink lines turned solid faster than you can say “monkeypox.” I was so healthy, nimble and sporting for two-plus years! Why now?

The universe works in mysterious ways, that’s why. Now that the sun is out and I’ve got a new bike and comedy shows on the books, the COVID dodgeball pegged me square in the chest, and it hurt! I can, however, still smell, which is great. And my appetite is still ravenous if anyone wants to drop off a Pesto Wrapture from Big Wrap.

Coincidentally, I could really use a hard shutdown, so maybe that’s why I got it. The fact that I stopped washing my hands, started going to Belly Up shows and hugging Texans probably didn’t help either. Relax! They’re jokes, people, jokes!

The shutdown part is real though. Four hours into my positive test result, I had done a lot of correspondence on my phone, mostly rearranging and/or covering day-to-day life, but then I thought about everything I could or “should” do. You know, like, quick, write a screenplay! And then I hacked up a lung and tried to sleep. We are so conditioned to GO and DO that being sick and getting rest is actually quite difficult to do, but I’m still trying.

Being vaccinated, while not variant-proof, is likely the reason for me being able to be a little more relaxed about the whole thing. That’s not to say I won’t be super careful reintroducing my athletic adventures since long-haul symptoms are a very real thing. We are where we are, and perhaps the more people who get a mild case the better our resistance will be in the long run. I’ve got the ’munities now!

Remember when we used to obsess over who it came from? That seems so secondary now. Of course, it’s still helpful to know if you’ve come in contact with someone directly, but it’s really anyone’s guess. Someone asked me if I knew where I got it and between licking trash cans and hugging strangers I simply cannot tell you with any certainty. The truth is you still need to wash your hands and say your prayers, because Jesus and germs are everywhere!

Beth’s favorite is: Pesto Wrapture w/chix, no chz, no sour, hot and mild. She can be reached at ­bethabrandon@hotmail.com. 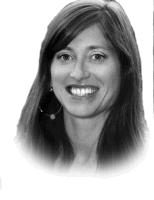